Dollar to End Week as Strongest, Subject to NFP Reactions

Asian markets are generally in red following the steep corrective selloff in the US overnight. The forex markets are relatively steady though, with Dollar and Yen trading with a firm tone. Australian and New Zealand Dollars are the weakest ones, followed by Sterling. Over the week, Dollar is set to end as the strongest one, subject to reactions to non-farm payroll report today. But even so, the question is on whether the greenback could close above prior week’s high.

Technically, we’d reiterate again that no key resistance level is taken out despite the strong rebound in Dollar in the past two days. The closer ones are 1.1762 support in EUR/USD and 0.9161 resistance in USD/CHF. These two levels have to be taken out before considering the rebound a genuine one. Separately, AUD/JPY is an interesting one to watch now. We remain cautious that thrust out of the triangle consolidation is a terminal one. That is, it could conclude a larger rally. As long as 76.78 resistance turned support holds, the up trend is still safe. But a firm break there would start a larger correction and bring deeper fall to 55 day EMA for confirmation. 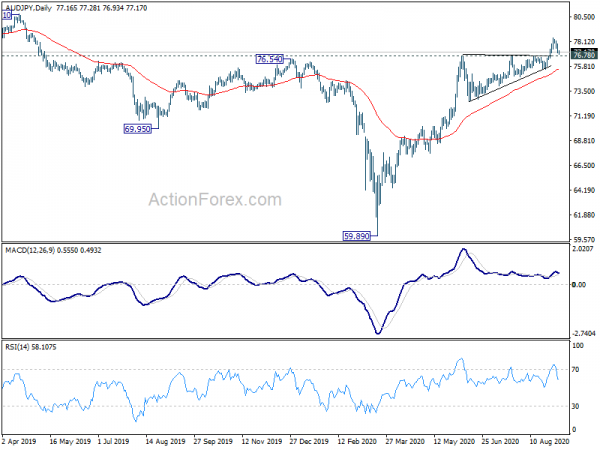 NASDAQ’s up trend not in threat despite -5% pull back 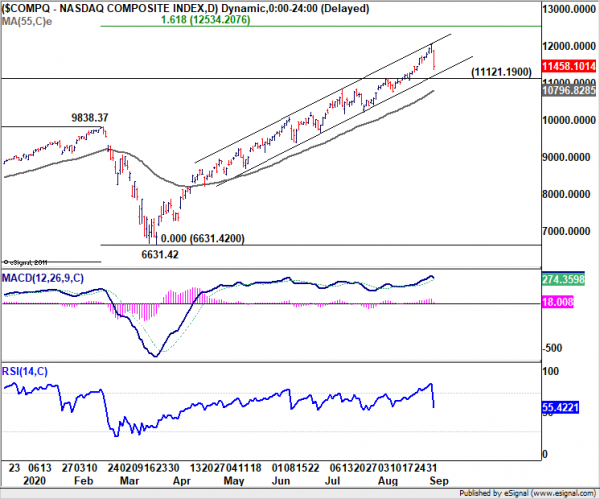 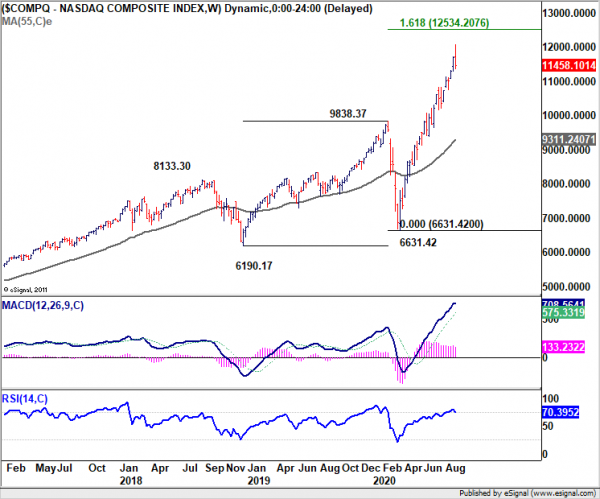 Asia markets open sharply lower, following the selloff in US overnight. The -1.8% decline in Hong Kong HSI (at the time of writing) looks tiny comparing to the near -5% decline in NASDAQ. But the technical development is much more bearish.

The index survived all the political turmoils in the past few months, including the forceful implementation of national security law by the Chinese government. But the channel that started back in March is finally broken with today’s decline. Daily MACD is also trending down.

It now looks like corrective rebound from 2139.26 has completed with three waves up to 26782.61. Immediate focus is now on 24167.78 support, which might be tested next week if the decline continues. Firm break there will confirm this bearish case and target 21139.26 low again. That could be accompanied by selloff in Asia markets elsewhere, which in turn might drag down Australian and New Zealand Dollars.

NFP in focus as Dollar index capped below 93.47 resistance

US Non-Farm Payrolls employment data will be the main event for today. Markets are expecting 1550k job growth in August, slightly down from July’s 1763k. Unemployment rate is expected to drop to 9.9%, down from 10.2%. Looking at other employment related data, ADP private employment was a big disappointment with just 428k growth. ISM Manufacturing employment edged higher by 2.1 pts to 46.4, but stayed in contraction. ISM Non-Manufacturing employment rose notably by 5.8 pts to 47.9, but also stayed in contraction. Jobless claims was a positive development though, with four-week moving average down from 1.34m to 992k.

Dollar’s reaction to NFP data is relatively uncertain. Dollar index’s down trend since March’s spike looks overstretched, with clear bullish convergence condition in daily MACD and RSI. Yet there has been no follow-through buying in the multiple rebound attempts in recent weeks. Break of 93.47 resistance is needed to be first sign of short term bottoming. In that case, we’d likely see a test on 44 day EMA (now at 94.43) at least. 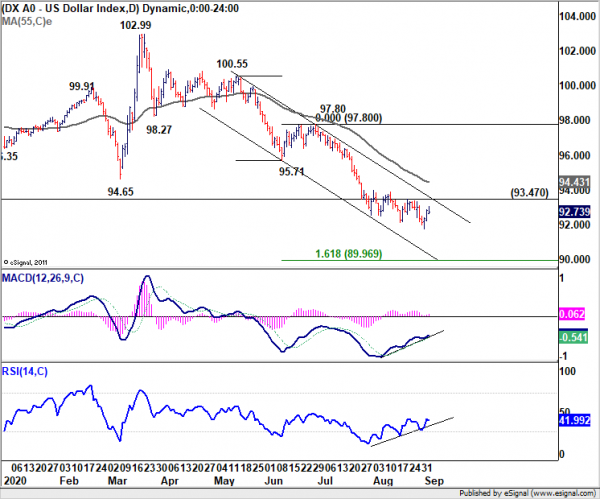 Fed Evans comfortable with inflation at 2.5% for averaging

Chicago Fed President Charles Evans said the new average inflation targeting was “consistent with the type of outcome-based forward guidance that I advocated and that the Committee used to speed the recovery after the Great Financial Crisis.”

“I expect that articulating outcome-based forward guidance for the rate path and asset purchases could be beneficial in the not-too-distant future” he added. He’d be “comfortable” with inflation going up to 2.5% “as long as we were trying to average off very low inflation rates”.

Evans also said, “even with steady progress in controlling the virus and additional fiscal support, I expect it will be some time before the economy recovers from the hit it took”. He expects the unemployment rate would still be somewhere in the range of 5% to 5.5% at the end of 2022.

Separately, Atlanta Fed President Raphael Bostic said, “as long as we see the trajectory moving in ways that suggest that we are not spiraling too far away from our target, I’m comfortable just letting the economy run and letting it play out”.

Suga leads the race to LDP leader as popularity surges

Popularity Japanese Chief Cabinet Secretary Yoshihide Suga surged sharply, making him the favorite to win the leadership of the ruling Liberal Democratic Party. As a close aide of outgoing Prime Minister Shinzo Abe, he pledged to continue the Abenomics reform if he takes the position.

According to a survey by Asahi Shimbun, Suga has 38% of public support, well ahead of 25% for former Defence Minister Shigeru Ishiba and LDP policy chief Fumio Kishida. Public debates will be held on September 9, 12. The leadership election will take place on September 14. The Winner is virtually assured of becoming prime minister because of the LDP’s parliamentary majority.

Australia retail sales rose 3.2% mom in July, slightly below expectation of 3.3% mom. All state and territories reported growth in sales, except Victoria which was down -2.1% mom due to stage four lockdown.

“Turnover in clothing, footwear and personal accessory retailing (7.1 per cent) and cafes, restaurants, and takeaway food services (4.9 per cent) rose across the country, with the exception of Victoria, where the reintroduction of Stage 3 stay-at-home restrictions in July partially offset these rises. As was the case in April, restrictions led to significant falls in these industries in Victoria” said Director of Quarterly Economy Wide Surveys Ben James.

Germany factory orders and UK PMI construction will be featured in European session. US non-farm payrolls and Canada employment will be the main events of today. 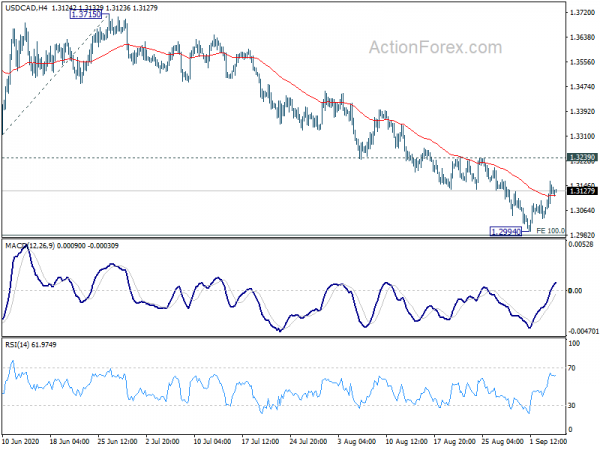 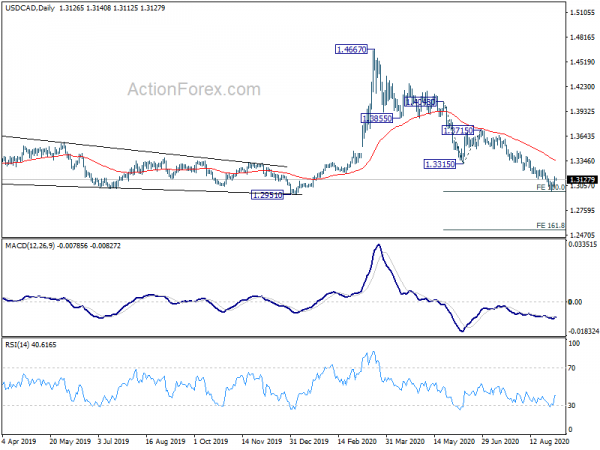