The Pound’s selloff continues today as the UK government’s so called internal market bill draws wide criticism, from EU to Scotland and Wales. Traders continue to off-load Sterling on no-deal Brexit risks. European markets, though, somewhat stabilized and recovered from yesterday’s selloff. US stocks futures also point to recovery at open. Yen and Dollar turns softer as a result while commodity currencies pare back some losses. Canadian dollar will now look into BoC rate decision.

Technically, despite brief breach of 1.1762 support, EUR/USD quickly recovers. Similarly, EUR/JPY breached 124.44 support earlier today but recovers too. Both developments keep near term bullishness intact for now, and focus will turn to the strength of the rebound. Gold also recovered just ahead of 1902.73 support. Focus is back on 4 hour 55 EMA. Break there will likely extend the rebound towards 1992.37, or even 2000 handle. That would be a signal of return of Dollar weakness. 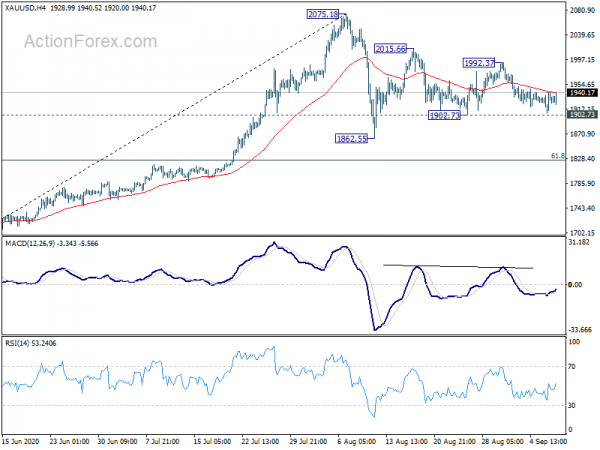 Scottish First Minister Nicola Sturgeon also criticized, “the internal market bill that the UK government will publish today is a full frontal assault on devolution…. , this is a bill that, by the government’s own admission, breaks international law. This UK gov is the most reckless (& to make it worse, incompetently so) and unprincipled in my lifetime.

The Welsh counsel general and minister for European transition, Jeremy Miles, also said bluntly. “Let me be clear – the UK government plans to sacrifice the future of the union by stealing powers from devolved administrations,” he said. “This bill is an attack on democracy.”

Australia Westpac Consumer Sentiment surged 18% to 94.8 in September, up from 79.5. The index is now just -1.6% below the average over the six months prior to the emergence of COVID-19 in March. “Consumer confidence is returning to more normal levels, although the sensitivity to progress in managing the virus and the opening up of economies remains key to the outlook”

RBA will next meet on October 6, the same say as the government’s Federal Budget announcement. Westpac said “it is reasonable to expect further initiatives from the Reserve Bank to loosen monetary policy”. That approach will be “entirely appropriate” to complement the stimulatory budget.

Preliminary reading of ANZ Business Outlook survey showed marked improvement in business confidence , from -26.0 to -41.8. Own activity outlook also jumped form -17.5 to -9.9. ANZ said “firms are largely looking through the re-emergence of COVID-19 in the community”. Many activity indicators are also “at their highest levels since February”, even though still well down compared to pre-COVID days”.

ANZ added: “The New Zealand economy has a long way to go to navigate this crisis. Fiscal and monetary policy are certainly working their magic. But come year end, far fewer firms will be supported by wage subsidies, and the loss of tourists will be more sorely felt. But for now, things appear to be firmly in the “could be worse” basket.”

Also released, manufacturing sales dropped -12.2% in Q2. The main industry movements were: petroleum and coal products; down -33%, metal products, down -22%; transport equipment, machinery, and equipment, down -14%.

China’s headline CPI moderated to 2.4% yoy in August, from 2.7% yoy a month ago. High base and softened growth in food inflation was the key reason for the slowdown. Excluding food and energy, core inflation steadied at the subdued level of 0.5% yoy. PPI improved to -2% yoy, from July’s -2.4%. This signals that upstream prices stayed in deflation. 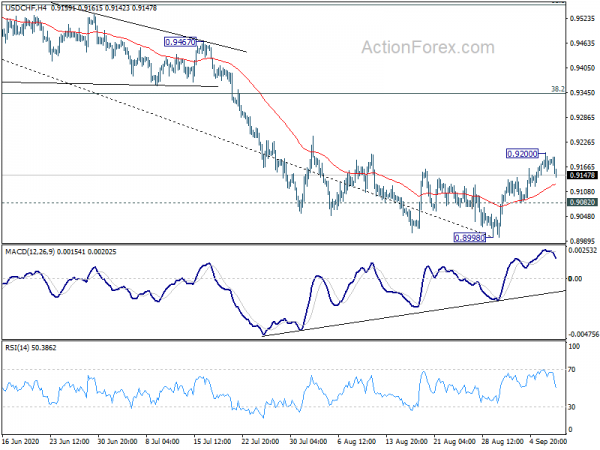 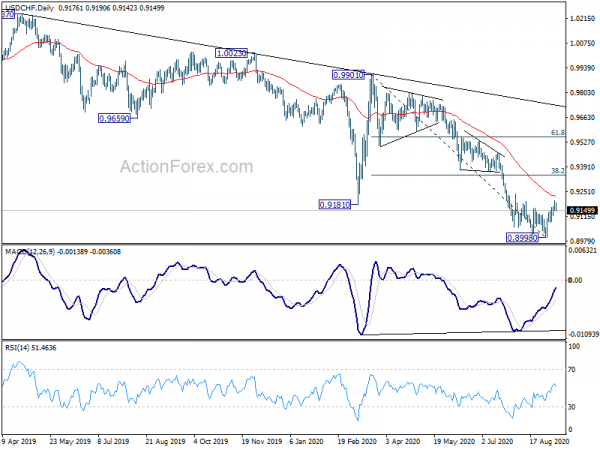