Dollar trades generally soft in Asian session but losses are so far limited. The greenback is actually still staying above last week’s low against all but Yen and Kiwi. Major focus will turn to FOMC today and traders could finally commit to a direction, after getting Fed’s new economic projections. As for today, euro is currently the second weakest, followed by Swiss Franc. Kiwi and Aussie are the strongest ones.

Technically, USD/JPY remains an interesting one to watch today. It’s now eyeing 105.10 support and break will trigger deeper fall to 104.18 low. It’s unsure whether such development would drag down the Dollar, or other Yen crosses more which lifts the greenback elsewhere. Key levels to watch will be 124.44 support in EUR/JPY and 135.53 fibonacci level in GBP/JPY. We might see Dollar strengthens if the breaks of the levels in EUR/JPY and GBP/JPY prompt downside accelerations.

In non-seasonally adjusted term, Japan’s expected dropped -14.8% yoy to JPY 5232B in August. That’s the 8th straight month of double-digit decline, as well as the 21st month of contraction. It’s the worst run since the 23-month contraction through July 1987. Exports are generally expected to stay weak and might not reach pre-pandemic level until a least early 2022. Imports dropped -20.8% yoy to JPY 4984B. Trade surplus came in at JPY 248B.

Australia Westpac leading index rose to -2.56 in August, up from -4.42. Westpac said the improvement was broadly consistent with 1.8% growth in Q3, despite an expected -4% in the coronavirus center Victoria. That would also mean a “somewhat” moderated growth pace in Q4 at 2.2%. The combined second half growth would be 4%, more optimistic that RBA’s expectation of 1.3%.

Westpac also noted some market speculation surfaced after RBA minutes, for a rate cut from 0.25% to 0.1%. Such an option will “remain under considering but there appears to be no urgency”. RBA would indeed focus on supporting government bond markets first, including borrowing of state and territory governments.

The US Trade Representative said it will drop the 10% tariffs on Canadian  non-alloyed, unwrought aluminum, retroactive to September 1. The tariffs were reimposed in August due to a surge in import earlier this year. But USTR expects the volume to normalize back to 70k to 83k tons a month for the rest of the year, after consultation with Canada.

Canadian also dropped the threat to retaliate after the US move. Trade Minister Mary Ng emphasized “Canada has not conceded anything. We fully retain our right to impose our countermeasures if the U.S. administration decides to reimpose its tariffs on Canadian aluminum products, and we are prepared to do so.” Deputy Prime Minister Chrystia Freeland also insisted: “This is not a negotiated deal … we have not negotiated an agreement with the United States on quotas”.

Separately, USTR blasted WTO’s ruling against US tariffs on Chinese goods. Robert Lighthizer criticized in a statement the WTO “provides no remedy” for China’s “harmful technology practices.” ‘”The United States must be allowed to defend itself against unfair trade practices, and the Trump Administration will not let China use the WTO to take advantage of American workers, businesses, farmers, and ranchers,” he added.

Fed will have the first monetary policy decision after adopting “average inflation targeting”. No policy change is expected. Instead, first focus will be on the tweak in the accompanying statement. The statement should reflect that it seeks to seeking to achieve inflation that averages 2% over time. That is, as Chair Jerome Powell said before, “following periods when inflation has been running below 2%, appropriate monetary policy will likely aim to achieve inflation moderately above 2% for some time”. Secondly, new economic projections should reveal Fed’s view on the outlook of both the economy and the policy rate.

Intraday bias in USD/JPY remains neutral first with focus now on 105.10 support. Break will turn bias to the downside for retesting 104.18. Further break there will resume whole decline from 111.71. On the upside, break of 107.05 will revive the case that pull back from 111.71 has completed with three waves down to 104.18. Intraday bias will be turned to the upside for 109.85 resistance. 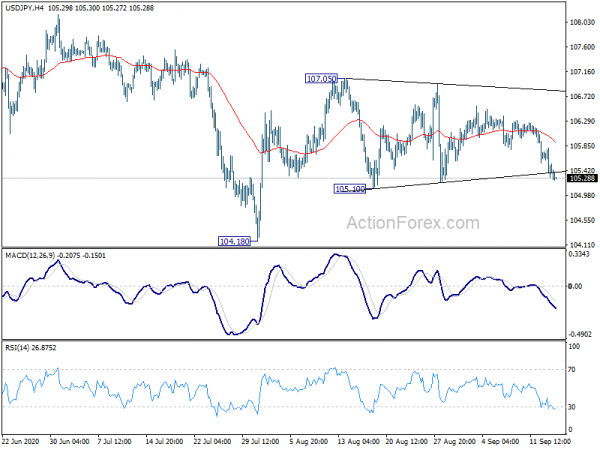 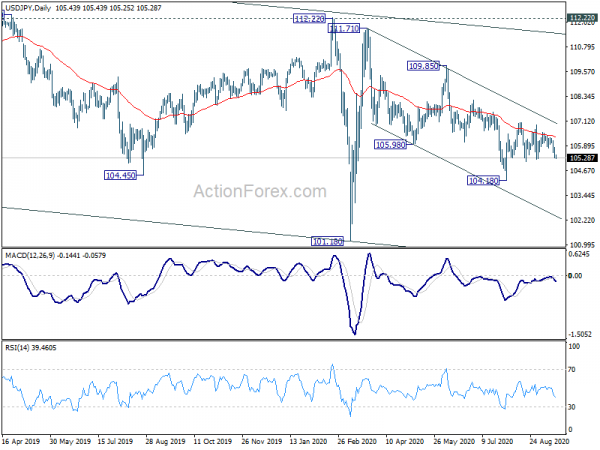