Dollar surges broadly today partly because FOMC announcement and projections overnight removed the risk of extra dovishness. Also, Hong Kong led decline in Asian stocks is providing extra support to the greenback. Yen is following closely as the second strongest for now. On the other hand, New Zealand Dollar is currently the worst one, followed by Euro and then Australian dollar. Canadian dollar is mixed as the strong rise in oil price this week is cushioning the bearish turn.

Technically, EUR/JPY completed a head and shoulder top yesterday, which suggests that it’s now correcting the rise from 114.42 to 127.07. Similarly, EUR/USD also breaches 1.1754 support today. Sustained trading below there will confirm the head and shoulder top and the start of correction to rise from 1.0635 to 1.2011. Gold’s sharp fall today also suggests rejection by near term trend line resistance. Deeper fall would now be in favor to 1906.33 support. Reaction from there would help decide the sustainability of Dollar’s rebound. 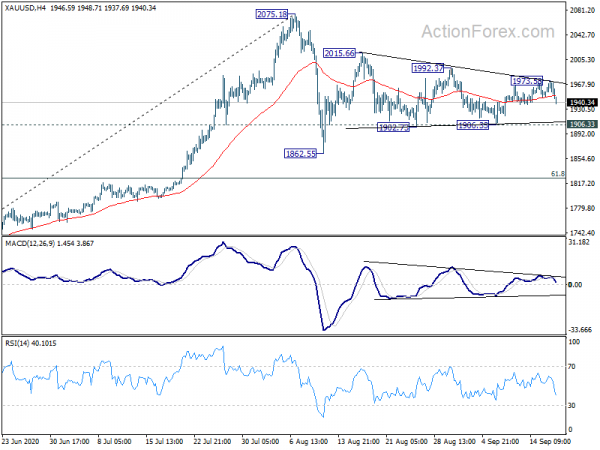 Fed stands pat, aim to achieve inflation moderately above 2% for some time

FOMC kept federal funds rate unchanged at 0-0.25% as widely expected. Additionally, Fed will continue with asset purchases “at least at the current pace”. Also, the committee would be “prepared to adjust the stance of monetary policy as appropriate”.

In line with the new “average inflation targeting”, Fed said: “With inflation running persistently below this longer-run goal, the Committee will aim to achieve inflation moderately above 2 percent for some time so that inflation averages 2 percent over time and longer-term inflation expectations remain well anchored at 2 percent.”

In the new economic projections, Fed projected a much shallower contraction in 2020 but revised down 2021 and 2022 growth. Unemployment rate forecasts were also revised lower through the horizon. Core PCE inflation projections were revised up but would stay below Fed’s 2% target through 2022. Logically, with or even without the new average inflation targeting, federal funds rate are expected to stay at current level through 2022.

Here are the median forecasts:

BoJ stands pat, will not hesitate to ease further

BoJ left monetary policy unchanged as widely expected. Under the yield curve control framework, short term interest rate is kept at -0.1%. BoJ will also continue to purchase JGBs, without upper limit, to keep 10-year JGB yield at around 0%. The decision was made by 8-1 vote as usual, with Goushi Kataoka dissented, pushing to strengthen monetary easing.

The central bank said the economic outlook is “likely to follow an improving trend through the materialization of pent-up demand and supported by accommodative financial conditions and the government’s economic measures”. But pace would be “only moderate while the impact of COVID-19 remains worldwide”. Annual CPI core is likely to be negative for the time being, but it’s expected to turn positive and increase gradually with economic improvement.

It also reiterated the “extremely high uncertainties” over the pandemic impacts. For the time being it will closely monitor the impact of COVID-19 and “will not hesitate to take additional easing measures if necessary.”

NZD/JPY trades lower today after failing to sustain above 4 hour 55 EMA. Focus is now back on 69.89 support. Break there will firstly resume the decline from 71.97. Secondly, that will add to the case that whole rise form 59.49 has completed with five waves up to 71.97. A deeper correction would then be underway to 68.75 support and probably further to 38.2% retracement at 67.20. 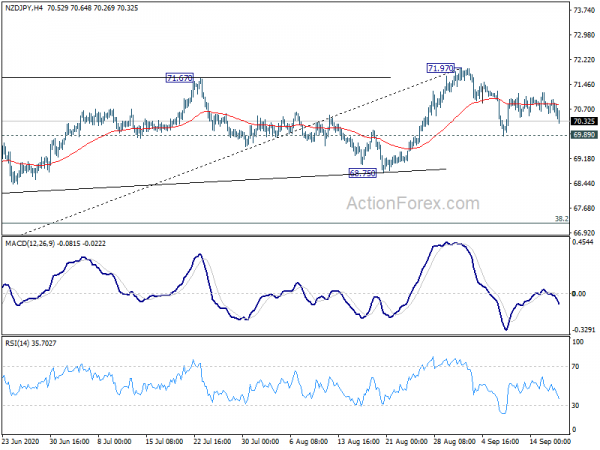 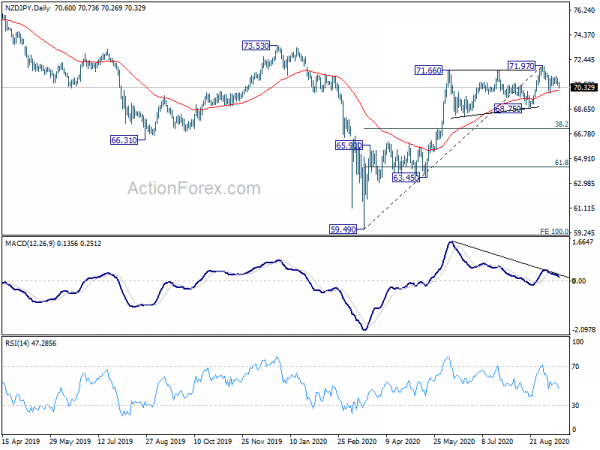 BoE rate decision will be the main focus in European session and no policy change is expected. Eurozone will release August CPI final while Swiss will release trade balance. Later in the day, US will release jobless claims, housing starts and building permits, and Philly fed survey.

EUR/USD’s break of 1.1754 support suggests resumption of fall from 1.2011 and turns intraday bias back to the downside. More importantly, sustained trading below 1.1754 would confirm completion of a head and shoulder top, on bearish divergence condition in 4 hour MACD. Deeper decline should then be seen to 38.2% retracement of 1.0635 to 1.2011 at 1.1485, to correct the rise from 1.6035. For now, risk will stay on the downside as long as 1.1917 resistance holds, in case of recovery. 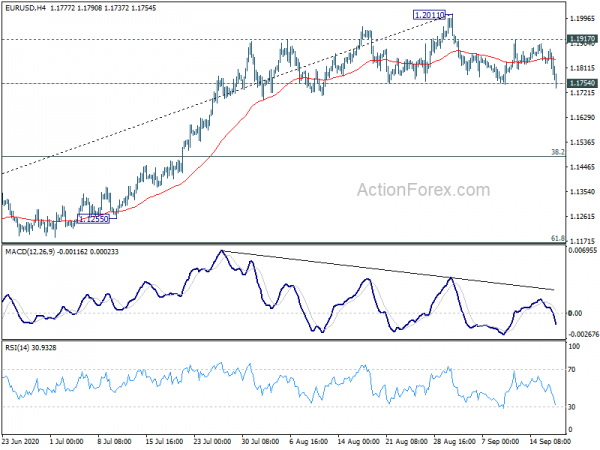 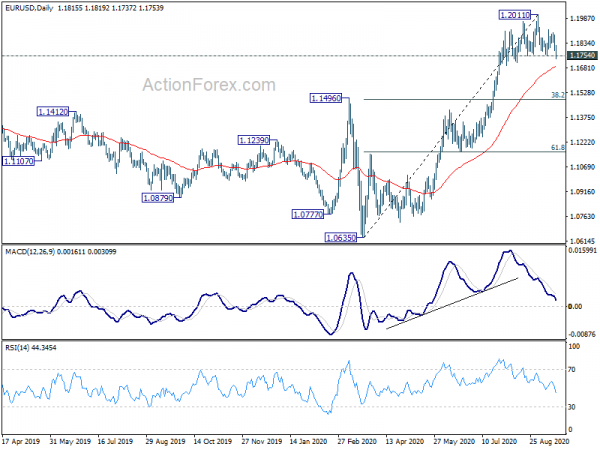