Sterling is currently the worst performing one today so far, on the never-ending concerns of coronavirus infections and no-deal Brexit risk. Australian Dollar is closely following as second weakest after RBA indicated more easing ahead to support employment. On the other hand, New Zealand Dollar is currently the strongest, thanks to cross buying against Aussie. Yen is recovering some ground today but remains the weakest for the week. Both Euro and Dollar are mixed, but the former is in retreat in a broader bullish context, while the latter is trying to recover some of this week’s lost grounds.

Technically, we’re still waiting for more guidance to confirm Dollar’s weakness, including 1.3007 resistance in GBP/USD, 0.7209 resistance in AUD/USD and 1.3259 support in USD/CAD. Gold is pressing 1920.06 resistance but we haven’t seen committed buying through this resistance yet. AUD/NZD is an interesting one to look at. It’s still bounded well inside a near term falling channel despite various rebound attempts. Fall from 1.1043 is still in favor to continue, which might drag down the Aussie elsewhere. 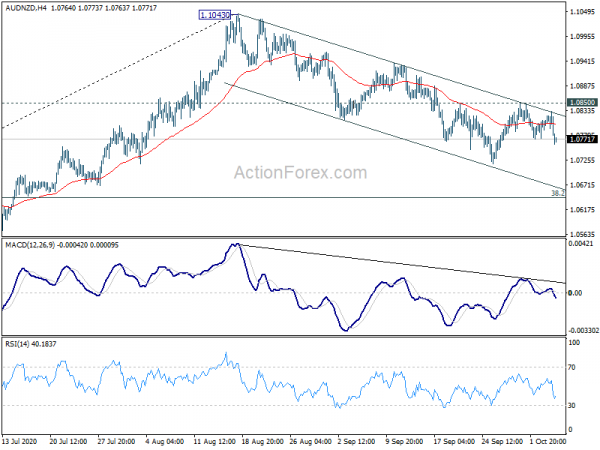 US trade deficit widened to -67.1B in Aug

From Canada, trade deficit narrowed slightly to CAD -2.4B in August.

ECB President Christine Lagarde said Europe’s recovery is ” incomplete, uncertain, uneven.” Policymakers now “fear that “the containment measures that have to be taken by authorities will have an impact on this recovery”. So, instead for a V-shape rebound, “we fear that it might have that second arm of the V a little bit more shaky.” Lagarde also said ECB is “very attentive” to exchange rate developments. But she reiterated that ECB does not target the Euro exchange rate.

Governing Council member Pablo Hernandez de Cos said, “It cannot be ruled out that, depending on how the macroeconomic situation and the inflation outlook evolve, we may even have to increase the purchase programme or temporarily extend it.”

German Finance Minister Olaf Scholz said, “The new normal in times of the coronavirus pandemic requires that we remain vigilant and adapt our daily routine to the development of the pandemic.”

“The sharp rise in infections also underlines the need to implement Europe’s ambitious recovery programme timely and to set the right course for Europe’s future,” adding that Germany wants to ensure that the fund is available in 2021. “It is key for the recovery that member states can use the funds when the crisis is still ongoing”.

European Commission Vice President Maros Sefcovic told the European Parliament, that “in case we reach an agreement” on post Brexit relationship with the UK, ” both parties will have to ensure ratification in time for an entry in to force by Jan 1, 2021.” However, “if this is not the case, we will be in the no-deal territory. Given that we are less than 100 days away from this day we cannot exclude this scenario.”

UK PMI construction rose to 56.8, sustained rise in activity ahead

UK PMI Construction rose to 56.8 in September, up form 54.6, above expectation of 58.5. Eliot Kerr, Economist at IHS Markit: “Following August’s slowdown, growth in UK construction activity rebounded strongly in September…. Forward-looking indicators point to a sustained rise in activity… Meanwhile, latest PMI data pointed to another fall in employment numbers… That said, the rate of job shedding eased substantially, while building firms upped their purchasing activity in a further sign of encouragement for the months ahead.”

Nevertheless, in the statement, RBA emphasized that “addressing the high rate of unemployment as an important national priority.” It reiterated the pledge to “maintain highly accommodative policy settings as long as required. Also, it “will not increase the cash rate target until progress is being made” on employment and inflation.

Additionally, “the Board continues to consider how additional monetary easing could support jobs as the economy opens up further.” 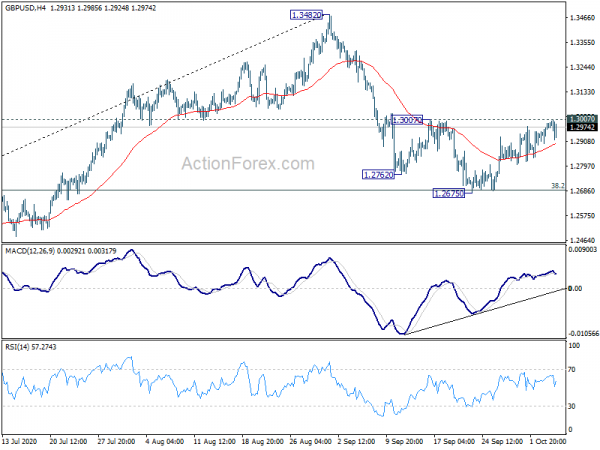 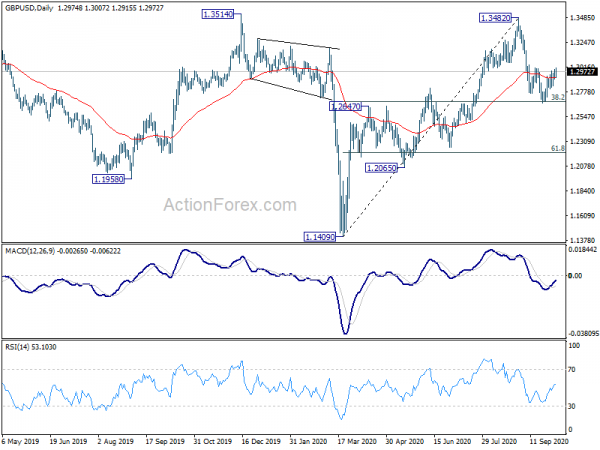