The markets are overall indecisive or the moment. US indices retreated mildly just ahead of record highs overnight. Mild softness is carried forward to Asian session. G20 finance leaders are seeing a less negative outlook for the global economy. Yet, the path forward remains highly uncertain depending on the pandemic. As we see, risk-on markets could be halted by negative news regarding vaccine developments any time.

In the currency markets, Dollar and Yen are currently the stronger ones for the week. Aussie and Sterling remain the weakest ones. But there are no key levels broken yet. EUR/USD is now pressing 1.1732 minor support. Break there will suggest completion of recent rebound from 1.1612. That might help trigger a strong rebound in the greenback. GBP/JPY is also eyeing 135.87 minor support and break will indicate completion of rebound from 133.03. But for general Sterling weakness, we’d prefer to see a break of 0.9162 resistance in EUR/GBP to confirm.

Australia Westpac Consumer Sentiment rose 11.9% to 105.0 in October, up from 93.8. The Index has now lifted by 32% over the last two months. It’s also stands at the highest level since July 2018, 10% above the six-month average prior to the coronavirus pandemic. Confidence was also lifted in all states, including even Victoria (up 13.7%) which is still in lockdown. Confidence in New South Wales surged 17.5%, Queensland up 7.1%, Western Australia up 2.4%, South Australia up 9.3%.

Westpac also noted that one of the “likely factors” for the surge in sentiment was an expectation of RBA rate cut from 0.25% to 0.10% in November. Communications from RBA over the last few weeks “points to this outcome” too. And, “there seems to be no reason for the Board to delay its decision”.

RBNZ Hawkesby: Negative rate is not a game of bluff

RBNZ Assistant Governor Christian Hawkesby said the central bank is still “very much in the mindset of ‘have we provided enough stimulus, and if we need to provide more what is the best way to do that?'” And that is what “motivated our work around active preparation of a package of further tools.”

He emphasized that negative interest rate is “not a game of bluff” to talk down the New Zealand Dollar exchange rate. Though, “the biggest challenge about having a negative policy rate is the communication challenge,” he said. “How to explain it to the general public, how to explain it as a policy, how to win the argument, how to retain hearts and minds that you’re doing the right thing for the right reasons.”

San Francisco Fed President Mary Daly said overnight that policymakers “got the economy and the policy in a good position right now.” Fed is “well positioned to weather this storm we are in”. Though, she also acknowledged that “it remains to be seen if more will be needed”. She’ll “continue to watch the data and see if adjustments will be necessary” on monetary policies.

Daly also said in a speech that Fed has a “critical role to play” in building a society of “equal opportunity and inclusive success”. “We’ve committed to finding full employment experientially, by seeing it in wages and prices. When we’ve achieved 2 percent inflation on average, we will know that we have approached our maximum and that the economy is firmly on its sustainable path.” She added.

“In other words, in the absence of sustained 2 percent inflation or emerging risks, such as to financial stability, we will not take the punch bowl away while so many remain on the economic sidelines.”

G20 finance ministers and central banks see the global economic outlook as “less negative”. They are going to pledge to “sustain and strengthen” policy actions and “facilitate international” trade and enticements. Also, G20 will agree to freeze on the servicing of official bilateral debt for poor countries for another six months.

“The outlook is less negative with global economic activity showing signs of recovery as our economies have been gradually reopening and the positive impacts of our significant policy actions started to materialize,” the draft of the communique showed. “We will sustain and strengthen as necessary our policy response, considering the different stages of the crisis, to secure a stable and sustainable recovery.”

“We will continue to facilitate international trade, investment and to build resilience of supply chains to support growth, productivity, innovation, job creation and development”.

In the World Economic Outlook Update, IMF revised 2020 global GDP contraction to -4.4%, revised up by 0.8% from June’s update. The less severe than expected contraction reflects better-than-anticipated Q2 GDP outturns as lockdowns were scaled back in May and June, as well as indicators of a stronger recovery in Q3.

For medium-term outlook after rebound in 2021, “global growth is expected to gradually slow to about 3.5 percent into the medium term”. This implies “only limited progress toward catching up to the path of economic activity for 2020-2025 projected before the pandemic”.

IMF also noted that “the uncertainty surrounding the baseline projection is unusually large” resting on public health and economic factors that are “inherently difficult to predict”.

Looking at some details:

Intraday bias in EUR/USD remains neutral for the moment. As long as 1.1732 minor support holds, another rise is still mildly in favor. Break of 1.1830 will extend the rebound form 1.1612 to retest 1.2011 high. However, break of 1.1732 will suggest that correction from 1.2011 is extending with another leg. Intraday bias will be turned back to the downside for 1.1612 and below. 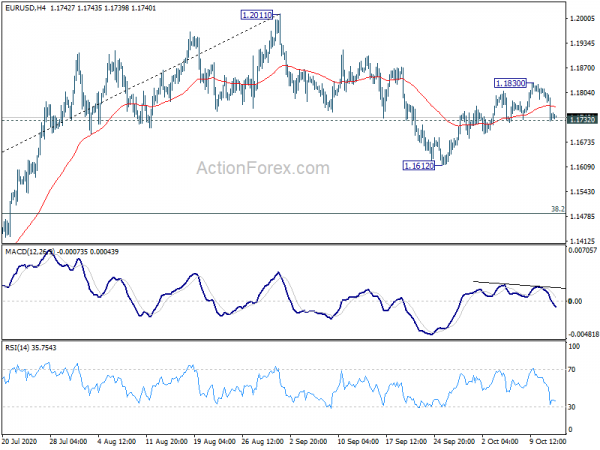 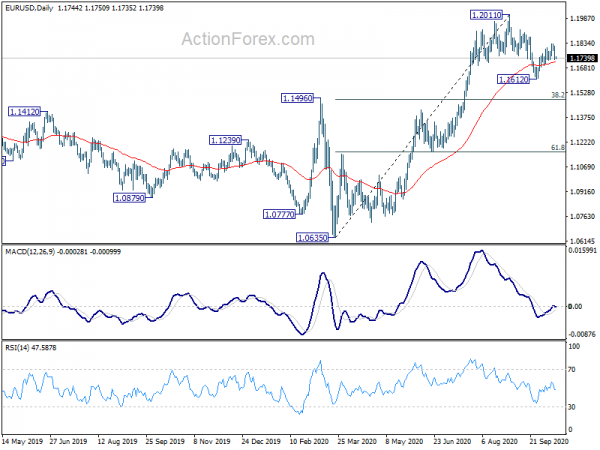