It appears that the stock markets couldn’t care less about the last debate before US Presidential election. Major Asian indices are trading in right range with mild gains. Nevertheless, Yen is trying to lead Dollar for a comeback while European majors are losing their strong position. In particular, Euro is pressured against Sterling and Swiss Franc and it’s prone to deeper selloff. With PMIs from Eurozone and UK featured, we might see more volatility in the European session ahead.

Technically, EUR/GBP and EUR/CHF are both worth a watch today. Break of 0.9007 temporary low in EUR/GBP will resume the corrective decline from 0.9291 high. While we’d expect strong support above 0.8866 support to contain downside, such development could cap Euro’s upside elsewhere. EUR/CHF was rejected by 1.0749 resistance, keeping near term outlook bearish. Focus is back on 1.0688 and break would extend the fall from 1.0877 to 1.0602 support. Nevertheless, it’s uncertain for now whether such development would drag down EUR/USD or USD/CHF more.

Japan PMI manufacturing edged up to 48.0, slow-going recovery could remain

Japan PMI Manufacturing rose slightly to 48.0 in October, up from 47.7, but missed expectation of 48.4. Markit noted that was the “slowest deterioration in the health of the manufacturing sector since January”. PMI Services dropped to 46.6, down from September’s 46.9. PMI Composite rose 0.1 to 46.7.

Bernade Aw, Principal Economist at IHS Markit, said: “recovery is slow-going and could remain so in the coming months as a global resurgence of COVID-19 cases could weigh on Japanese economic activity, particularly in the external facing sectors”.

Japan CPI core ticked up to -0.3% yoy, no price growth for six months

Japan CPI core (all item ex-food) ticked up to -0.3% yoy in September, from August’s -0.4% yoy, better than expectation. Still, core CPI hasn’t be positive for six months since May. The negative reading was caused largely by the government’s travel discount campaign. Yet, taking that facto out, core CPI was just flat. All item CPI dropped to 0.0% yoy, down from 0.2% yoy. CPI core-core (all item ex-food and energy) ticked up to 0.0% yoy, from -0.1% yoy.

BoJ will release its quarterly economic outlook along with policy statement on October 29. No policy change is expected at the meeting. Though, inflation forecasts could be downgraded to reflect the temporary downward price pressure of Prime Minister Yoshihide Suga’s Go To Travel campaign.

In Tokyo today, UK International Trade Secretary Liz Truss and Japan Foreign Minister Toshimitsu Motegi formally signed a trade agreement, putting in pen the deal they agreed in principle back in September. That’s the first major trade deal UK came to since Brexit. The deal is seen as largely preserving the terms which UK traded with Japan as part of the EU. UK expected it to boost GDP by 0.07% over the next 15 years.

The deal “has a much wider strategic significance”, Truss hailed. “It opens a clear pathway to membership of the Comprehensive Trans-Pacific Partnership — which will open new opportunities for British business and boost our economic security.”

The inflation readings are substantially below RBNZ’s own forecast of 1.1% qoq and 1.8% yoy as presented in the August MPS. While the economy appeared to be rebounding well from pandemic slump, risks to inflation outlook are clearly to the downside. As inflation is expected to slow further ahead, the case for more RBNZ easing continues to build up. It’s just a matter of time when negative rates will be adopted.

The calendar is rather busy in European session with UK retail sales and PMIs, as well as Eurozone PMIs featured. US PMIs will be the focus later in the day.

EUR/CHF drops sharply after being rejected by 1.0749 resistance, but stays above 1.0688 temporary low. Intraday bias remains neutral first and further decline is still expected. Fall from 1.0877 is seen as the third leg of the corrective pattern from 1.0915. Break of 1.0688 will target 1.0602 support next. However, on the upside, break of 1.0749 minor resistance will mix up the near term outlook again. 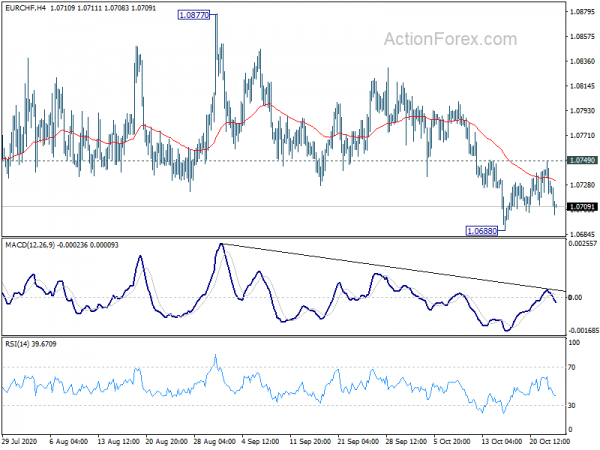 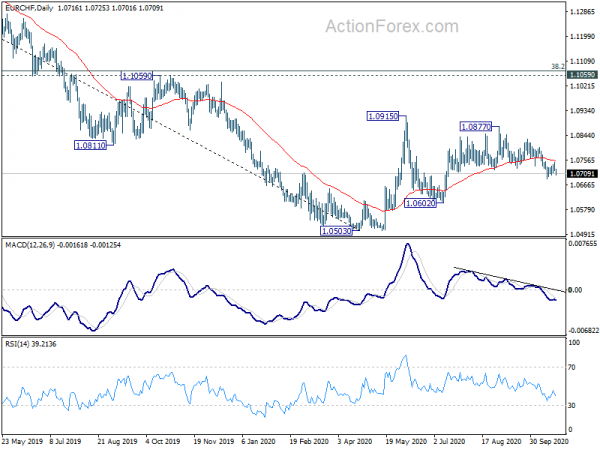