Dollar weakens again today but stay in very tight range as indecisive trading continues. The stronger than expected durable goods orders were are ignored by the markets. White House’s comment that stimulus deal will be there in “coming weeks” is also shrugged off. Swiss Franc is following Dollar is the weaker one. On the other hand, New Zealand and Canadian Dollars are the stronger ones, followed by Yen. Overall, the major pairs and crosses are still stuck in familiar range.

Technically, NZD/USD is attempting to accelerate upwards but the move isn’t too convincing yet. Sustained break of the near term rising channel will rise the chance for retest 0.6797, or even resume larger rally. But a reversal from current level, followed by break of 0.6659 minor support will keep the channel intact. That will also retain the view that price actions from 0.6511 area merely a corrective recovery. More importantly, in this case, correction from 0.6797 is not finished and would resume through 0.6511 at a later stage. 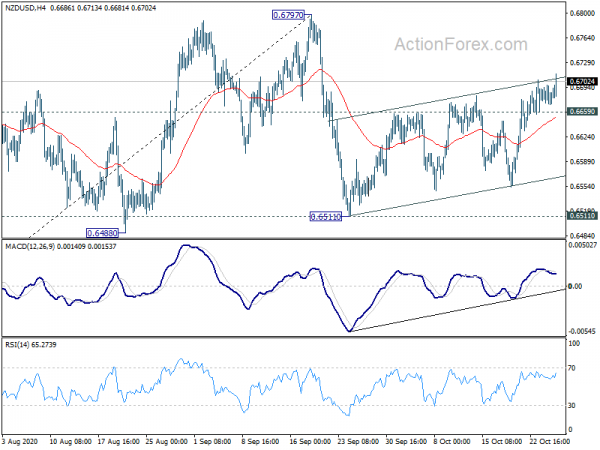 US durable goods orders rose 1.9%, five increase in a row

UK CBI retail sales balance dropped to -23 in October, down sharply from +11. Sales are expected to drop at a similar pace next month at -26.

Ben Jones, CBI Principal Economist said: “The fall in retail sales in October is a warning sign of a further loss of momentum in the economy as coronavirus cases pick up and restrictions are tightened across many parts of the country.

Scholz: Additional coronavirus measures to taken as uniformly as possible across Germany

German Economy Minister Peter Altmaier said the country is dealing with “exponential growth” of coronavirus infections while “the number of new infections is rising by 70-75% compared to the week before.” He expected number of daily new cases to jump to 20k a day at the end of this week.

Separately, Finance Minister Olaf Scholz also said the development was “very worrying”. Additional measures to curb the spread “should be targeted, temporary and focussed.” “They should be taken as uniformly as possible across Germany and be generally understandable.”

“So far, our country has fared quite well during the coronavirus pandemic and it will be decided in the coming weeks whether it will stay that way. It’s in our hands,” he added.

RBA Deputy Governor Guy Debelle told Senate that the first recession in 30 years could have already ended in Q3. “At the moment our best guess is it looks like the economy probably recorded positive growth rather than negative,” he said. “The strength elsewhere in the country was more than the drag from Victoria, and possibly the drag from Victoria was a little less than what we had guessed.”

Separately, Assistant Governor Michele Bullock said the Australian financial system “remains profitable, notwithstanding substantial loan loss provisions”. Their “strong capital position allows them to continue to lend to support the Australian economy.” But she also warned warned that “the economic recovery is expected to be unpredictable and uneven so there will be rising business insolvencies and problems for some households in servicing their debts.”

New Zealand trade deficit widened to NZD -1B in Sep

Range trading continues in EUR/USD below 1.1880 temporary top and intraday bias stays neutral. With 1.1688 support intact, further rise remains in favor. On the upside, break of 1.1880 will target a test on 1.2011 high. On the downside, though, break of 1.1688 will likely extend the corrective pattern from 1.2011 with another leg. Intraday bias will be turned back the downside for 1.1612 and below. 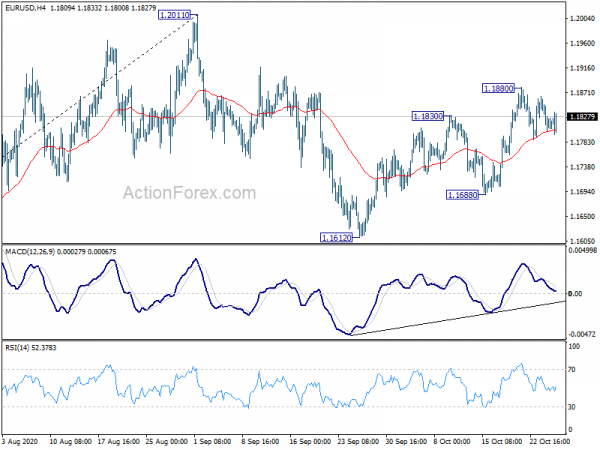 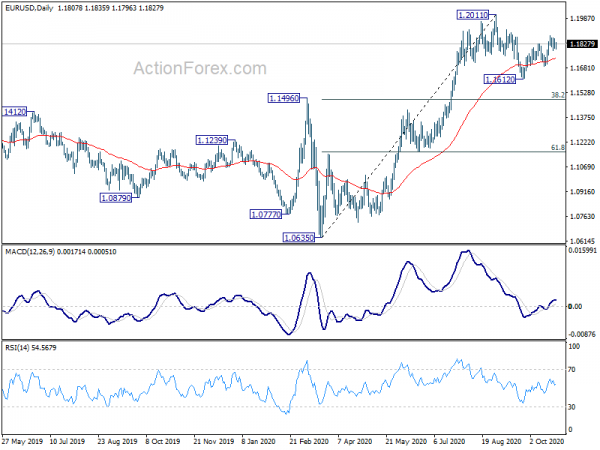