Dollar Broadly Sold Off as Markets in Full Risk-On Mode

Global stocks surge sharply as investors seem to be very optimistic on the result out of US elections. Major European indices are currently up around 2% while DOW future is up 400 pts. Dollar is sold off sharply, together with Yen and Swiss Franc. Australian Dollar left RBA’s rate cut behind and lead the chart on strong risk appetite. New Zealand Dollar and Euro are currently the next strongest.

Technically, while Dollar suffers steep selling today, EUR/USD is kept well below 1.1880 resistance so far. GBP/USD is held below 1.3175 resistance too. Even the stronger AUD/USD is held below 0.7157 near term resistance. There is no clear confirmation of Dollar’s reversal yet. At the same time, we’ll also watch AUD/JPY for sign of full return of risk-on markets. Firm break of 55 day EMA (now at 75.13) will be the first signal. Break of 76.52 resistance would be seen as a confirmation. 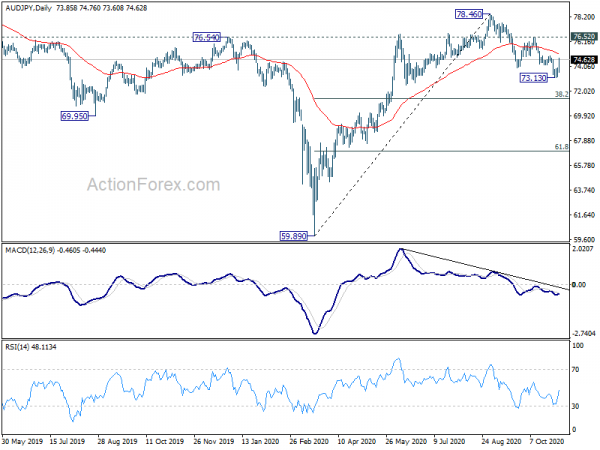 EU confirmed today that it received not response from the UK regarding the breach of the Brexit Withdrawal Agreement due to the Internal Market Bill. EU is now considering legal actions.

“We sent a letter of formal notice on 1 October to the UK for breaching its obligations under the Withdrawal Agreement.,” European Commission Spokespersona Daniel Ferrie said. As you know it had until the end of the month to submit its observations to that letter. To date I can confirm that the EU has received no reply from the UK. Therefore we are considering next steps, including issuing a reasoned opinion.”

Ferrie added: “More generally I would recall the EU is fully committed to achieving the full, timely and effective implementation of the Withdrawal Agreement within the remaining time available. That’s why we started the infringement procedure on 1 October. “This dispute will have to be resolved.”

FSO said: “The stability of the index compared with the previous month is the result of opposing trends that counterbalanced each other overall. Prices for clothing and footwear increased, as well as those for glasses and contact lenses. In contrast, prices for combined offers for fixed-line and mobile communication, as well as those for other fruits (melons and grapes) decreased.”

RBA Lowe: We’re not out of firepower, but negative rate still extraordinarily unlikely

In the post meeting press conference, RBA Governor Philip Lowe said “it would be incorrect to conclude that we are out of firepower” after today’s package of easing measures. He emphasized the central bank still has a “range of tools”, including ” further liquidity provision, asset purchases and transactions in the foreign exchange market.”

Still, negative rate policy is “extraordinarily unlikely”. “There is little to be gained from lowering the policy rate into negative territory,” he added. “While a negative rate might lead to a helpful depreciation of the Australian dollar, it could impair the supply of credit to the economy and lead some people to save more, rather than spend more.”

The central bank acknowledged that recent data have been “a bit better than expected” and “near-term outlook is better than it was three months ago”. But “recovery is still expected to be bumpy and drawn out and the outlook remains dependent on successful containment of the virus.”

Q3 GDP is expected to report positive growth. But it will “take some time to reach the pre-pandemic level of output”. GDP is projected to grow around 6% over the year to June 2021, and 4% in 2022. Unemployment rate is projected to peak at a little below 8 per cent, rather than the 10 per cent expected previously. Unemployment rate is expected to drop be to around 6% at the end of 2022. 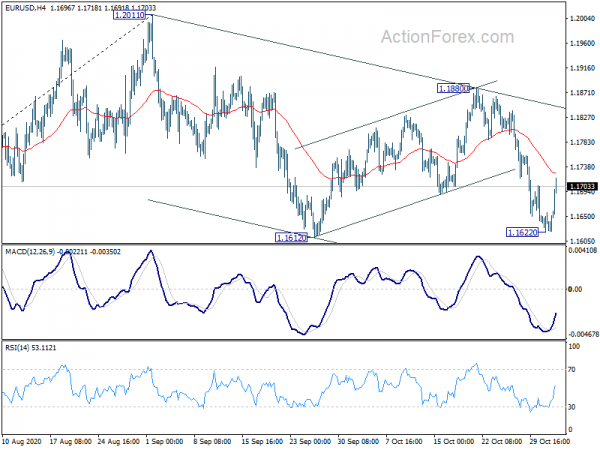 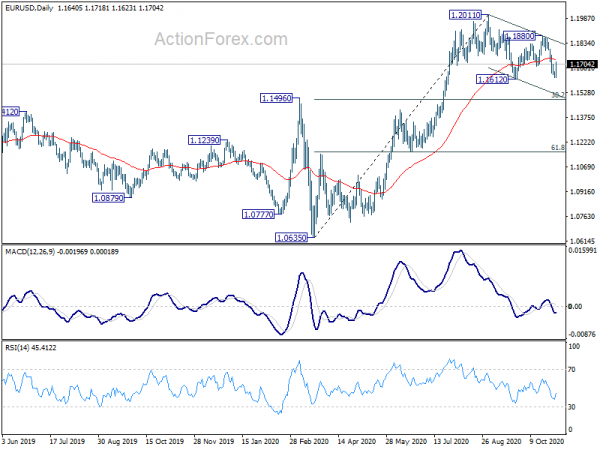