The financial markets are staying in consolidative mode. Asian stocks are mixed in tight range, following the mixed closes in US overnight. Gold is trading sideway ahead of key near term support. In the currency markets, Yen and Swiss France are mildly higher, paring some of this week’s losses. Meanwhile, commodity currencies turned softer. The economic calendar for today and tomorrow is very busy. Markets could turn back into trending mode if the data provide some inspirations.

Technically, Yen crosses are losing upside momentum. But further rise is still in favor as long as 104.73 support in USD/JPY, 123.18 support in EUR/JPY, 137.83 support in GBP/JPY, 75.47 support in AUD/JPY, and 79.87 support in CAD/JPY hold. However, break of theses levels would firstly argue that the selloff in Yen could be over for the near term. More importantly, it could be a hint on more cautiousness in the stock markets too, and/or a pull back in treasury yields. 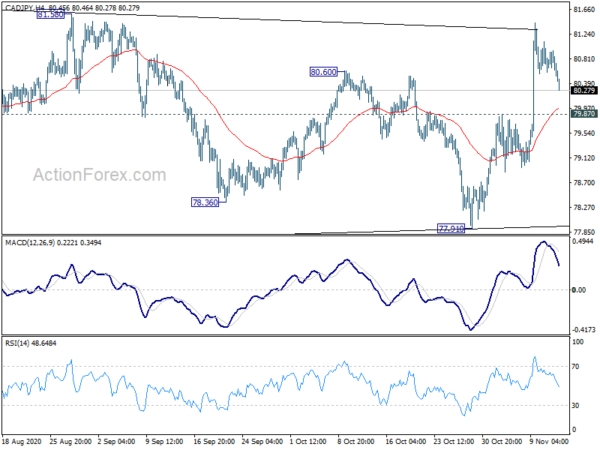 RBNZ Assistant Governor Christian Hawkesby said today that there is no change in forward guidance that OCR will stay at 0.25% until March 2021. Though, “less stimulus is required than we thought in August”, even though a “substantial amount” is still needed. Negative rates is a policy tool for the central bank is needed. But Hawkesby added that it’s less likely if banks use the cheap loans from the new FLP program.

New Zealand Dollar surges this week as markets see less urgency for negative rates due to improvement in outlook. ANZ still expects a cut to negative in August 2021, but it’s now “become a bit of a toss up”.

NZD/JPY’s rally from 59.49 resumes this week with strong break of 71.97 resistance The solid support from 55 week EMA is a sign of medium term bullishness. Focus is now on 73.53 structural resistance. Decisive break there should reaffirm this. NZD/JPY, be it starting an up trend or just correcting the long the down trend, should then target 61.8% retracement of 94.01 to 59.49 at 80.82. 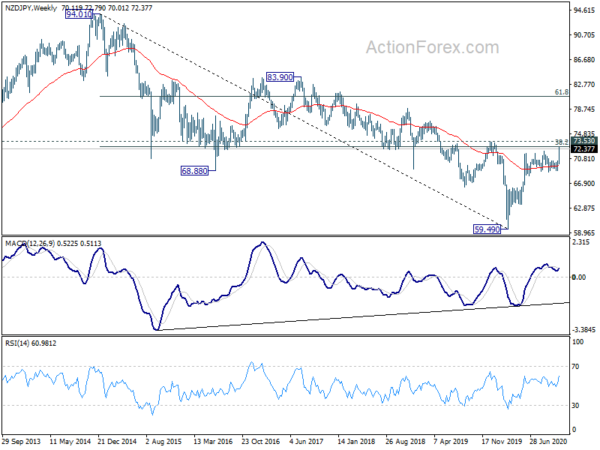 Bank of Japan board member Seiji Adachi said in a speech that it’s “difficult to envision a post-COVID-19 economy, at least for the time being”. The “process of making drastic changes to the socioeconomic structure can be painful”. It’s worth considering whether monetary might act as a “sort of safety net” for, or a “means of directly promoting” reforms.

Also, he added, “if the pace of economic recovery is much slower than expected, it is not possible to completely rule out the risk that firms’ positive stance toward the outlook will be lost or that corporate bankruptcies and discontinuation of businesses will increase”. Thus, “it remains necessary in the COVID-19 era to maintain an accommodative monetary policy stance while carefully monitoring economic developments.”

WTI crude oil surges to as high as 42.98 this week as boosted by coronavirus vaccine optimism. Though, it’s starting to lose momentum ahead of 43.50. At this point, we’re not expecting a firm break of 43.50 to resume the medium term rebound yet. At least, that’s not expected until will have a firmer schedule for vaccine deliveries. Break of 39.35 minor support will likely start another falling leg to extend the consolidation pattern from 43.50. 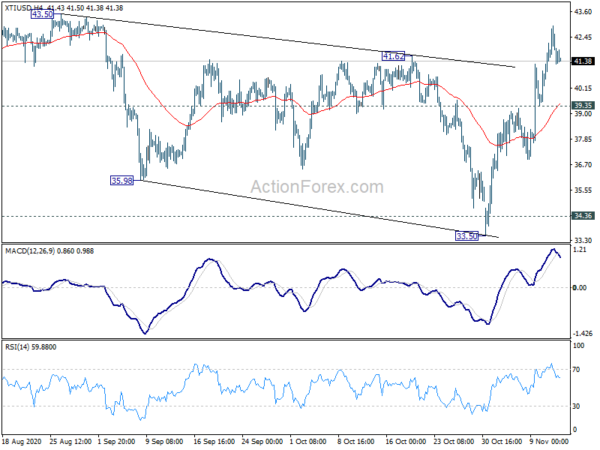 However, decisive break to 43.50 should have 55 week EMA firmly taken out. That would add to medium term bullishness for a take on 50.64 resistance turned support, which is close to 50 psychological level. 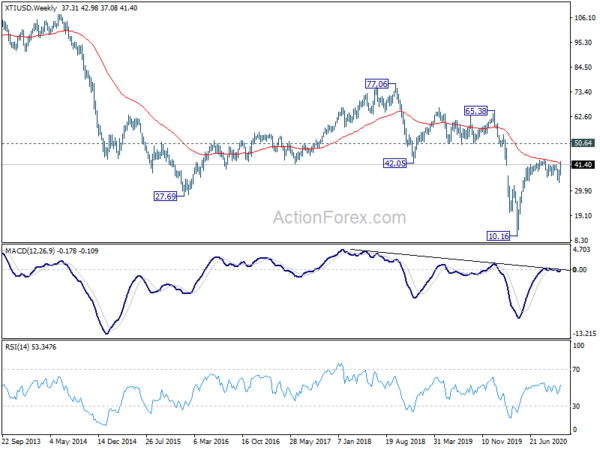 Looking ahead, UK GDP, productions and trade balance will be the main feature in European session. Eurozone will release industrial production and ECB monthly bulletin. US will release CPI and jobless claims later in the day.

EUR/JPY formed at temporary top at 125.13, after failing to sustain above 125.00 resistance, and retreated. Intraday bias is turned neutral first. Further rise is expected as long as 123.18 minor support holds. Correction from 127.07 could have completed with three waves down to 121.63. Break of 125.13 should bring retest of 127.07 high. On the downside, though, break of 123.18 minor support would extend the correction with another fall through 121.63. 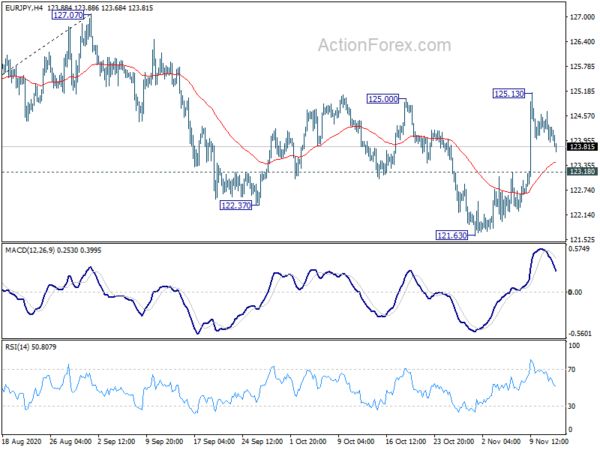 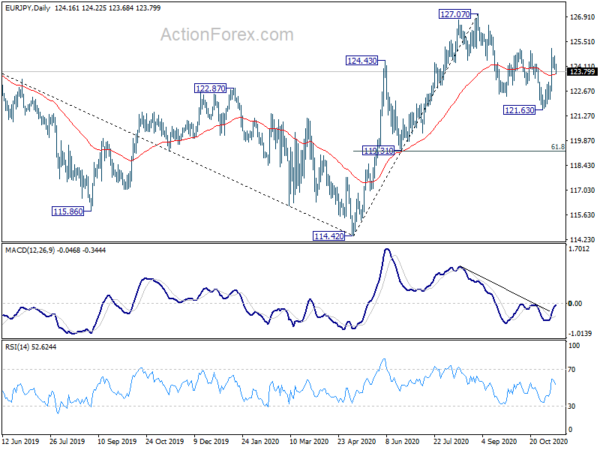