Dollar’s selloff intensifies further today, after worse than expected job data. Also, markets are generally on risk-on mode, as traders are optimistic that stimulus deal could be reached in the Congress soon. Swiss France is currently the next weakest, having little reactions to SNB rate decision. Australian and New Zealand Dollars are taking turns to be the strongest. Both are boosted by solid economic data. Sterling is following as next strongest, with Brexit trade negotiations making some progresses.

Technically, Dollar’s broad based down trend resumption is taking shape, with GBP/USD breaking away from 1.3539 resistance. USD/JPY has also broken 103.17 low. A focus in on when USD/CAD would break through 1.2688 temporary low. As for Aussie, EUR/AUD’s breach of 1.6033 low suggests down trend resumption, but there is no follow through selling yet. AUD/JPY’s breach of 78.78 temporary top also suggests rise resumption. Again, there is no follow through buying. In addition to Dollar’s decline, whether Aussie could solidify momentum is an interesting point before weekend too. 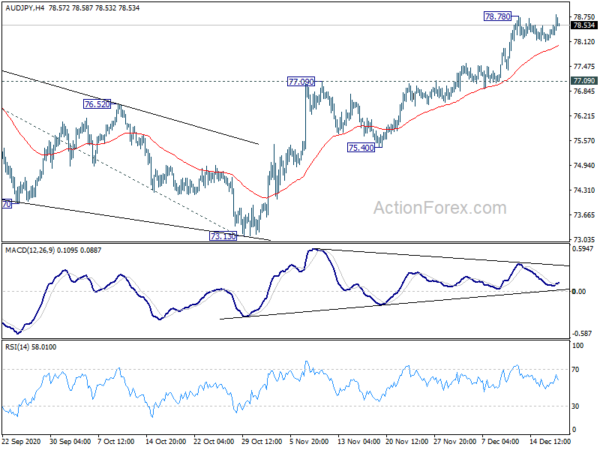 US initial jobless claims rose 23k to 885k in the week ending December 12, well above expectation of a fall to780k. Four-week moving average of initial claims rose 34.3k to 812.5k.

BoE stands pat, Q4 a little weaker than expected due to coronavirus

BoE judged that “the existing stance of monetary policy remains appropriate”. Bank Rate was held unchanged at 0.10%. Total target stock of asset purchase were also kept at GBP 895B. Both decisions were unanimous.

It also pledged to “stands ready to take whatever additional action” if inflation outlook weakens. Also, it maintained “the Committee does not intend to tighten monetary policy at least until there is clear evidence that significant progress is being made in eliminating spare capacity and achieving the 2% inflation target sustainably.”

The central bank noted that the roll out of coronavirus vaccines is “likely to reduce the downside risks to the economic outlook from Covid”. But Q4 GDP is likely to be a “little weaker than expected” due to  increase in Covid cases and associated re-imposition of restrictions

Outlook remains “unusually uncertain”, depending of “revolution of the pandemic and measures taken to protect public health, as well as the nature of, and transition to, the new trading arrangements between the European Union and the United Kingdom”.

SNB keeps sight deposit rate at -0.75%, pandemic to be back under control in foreseeable future

In the baseline scenario, SNB expects the pandemic to be “brought back under control in the foreseeable future”. Global recovery should therefore “regain momentum in the course of next year”. But production capacity will be “unfertilized for some time” and inflation will remain modest in most countries.

Also released, Swiss trade surplus widened to CHF 4.46B in November, above expectation of CHF 4.12B.

EU CPI was finalized at 0.2% yoy. The lowest annual rates were registered in Greece (-2.1%), Estonia (-1.2%), Slovenia and Cyprus (both -1.1%). The highest annual rates were recorded in Poland (3.7%), Hungary and Czechia (both 2.8%). Compared with October, annual inflation fell in fourteen Member States, remained stable in four and rose in nine.

New Zealand GDP grew 14.0% qoq in Q3, stronger than expectation of 12.8% qoq. That’s also the largest quarterly rise on record. However, on an annual bases, GDP dropped -2.2% over the year. Growth in Q3 was not enough to fully makeup for the economic impact of the coronavirus pandemic and the responding measures.

USD/JPY drops to as low as 102.93 so far today. The break of 103.17 support confirms resumption of whole down trend from 111.71. Intraday bias remains on the downside. Deeper decline would be seen to retest 101.18 low. On the upside, above 103.51 minor resistance will turn intraday bias neutral first. But break of 104.57 resistance is needed to indicate short term bottoming. Otherwise, outlook will stay bearish in case of recovery. 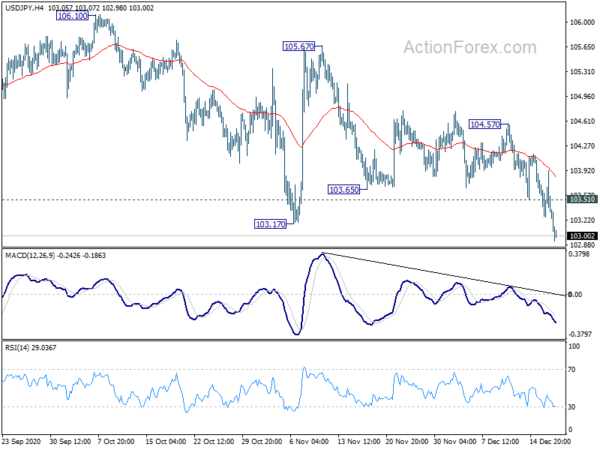 In the bigger picture, USD/JPY is still staying in long term falling channel that started back in 118.65 (Dec. 2016). Hence, there is no clear indication of trend reversal yet. The down trend could still extend through 101.18 low. On the upside, break of 106.10 resistance is needed to be the first signal of medium term reversal. Otherwise, outlook will remain bearish. 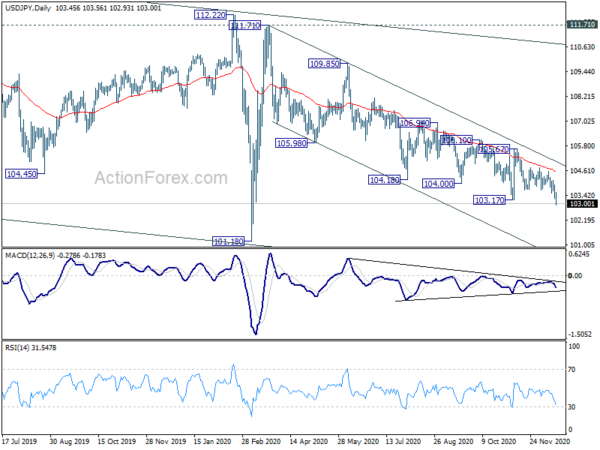