Canadian and New Zealand Dollar are both in the driving seats in the markets this week. Return of risk appetite is providing the base for rally. Meanwhile, Kiwi is lifted by stronger than expected job data while Loonie follows oil prices higher. Aussie is lagging behind on RBA, however. Euro and Swiss Franc continue to trade as the weakest ones, with more downside prospect for the near term. Dollar and Yen are mixed for now.

Technically, Sterling is apparently struggling to extend recent rally with much loss in momentum too. 1.3608 support in GBP/USD is a level to watch and break will bring deeper near term pull back. If that happens, we’d also monitor the reaction in EUR/GBP, on whether is would rebound from the current level through 0.8917 resistance to mark short term bottoming. BoE announcement tomorrow could be the trigger for the moves. 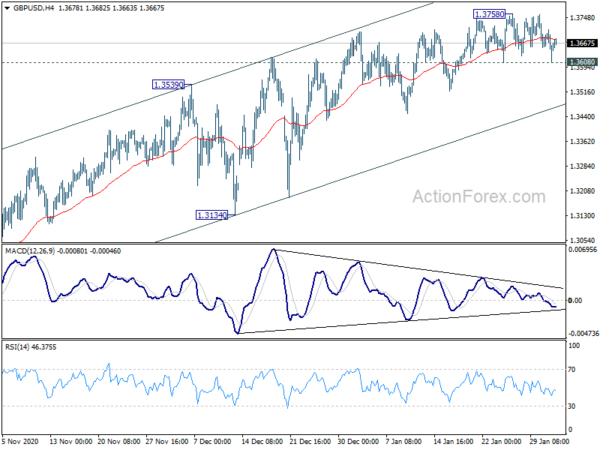 Labor costs index rose 1.6% yoy, slowed from Q3’s 1.9% yoy. “In the LCI, we can see that annual wage inflation is slowing as fewer employees have received wage increases,” StatsNZ business prices delivery manager Bryan Downes said. “Over the past year, more than half of the positions surveyed received no wage increase.”

NZD/JPY resumes up trend, targeting 77.07 next 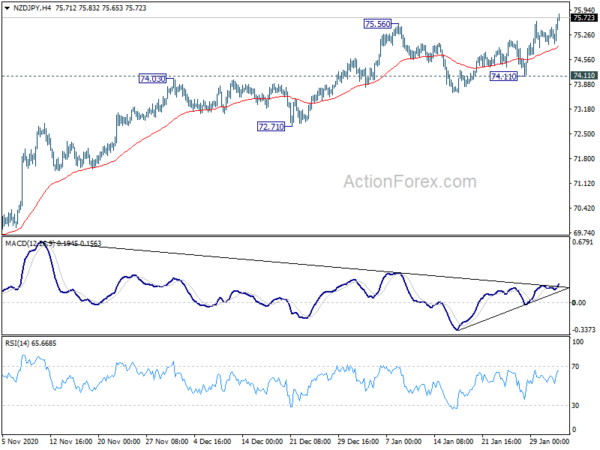 Current rise from 68.86 could be the fifth wave in the five wave sequence from 59.49. Hence, we’d be cautious on loss of upside momentum as it approaches 77.07 and tops around there. 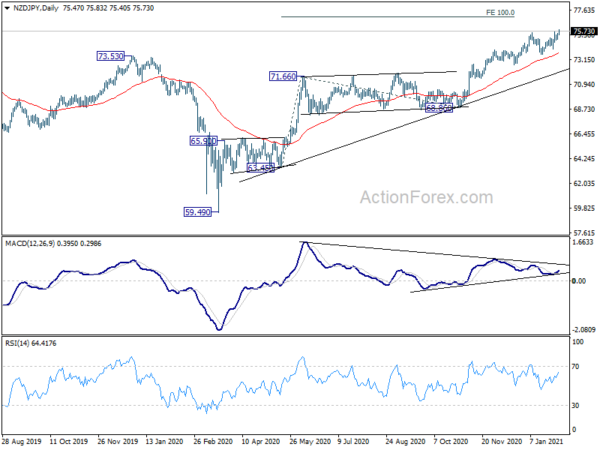 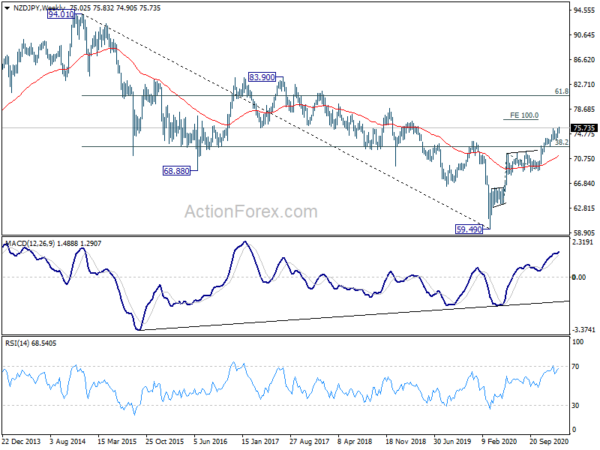 RBA Lowe: Very significant monetary support to be maintained for some time to come

In a speech, RBA Governor Philip Lowe said “very significant monetary support will need to be maintained for some time to come”. And, “it is going to be some years before the goals for inflation and unemployment are achieved.” It is “premature” to be considering withdrawal of monetary stimulus.

As other central banks have recently announced extensions of their bond purchases, if RBA were to cease bond purchases in April, “it is likely that there would be unwelcome upward pressure on the exchange rate.” The decision to purchase an additional AUD 100B of bonds beyond April, as announced yesterday, would also “ensure a continuation of the RBA’s monetary support for the Australian economy.”

Lowe also reiterated that RBA doesn’t expect to raise interest rate before 2024, an “it is possible that it will be later than this.” “So the message is: interest rates are going to be low for quite a while yet. The Reserve Bank is committed to provide the support the economy needs as its recovers from the pandemic.”

Release from Australia, AiG Performance of Construction rose to 57.6 in December, up from 55.3. Building permits jumped 10.9% mom, above expectation of 2.5% mom.

In a speech, BoJ Deputy Governor Masazumi Wakatabe said “downward pressure” on the economy from the resurgence of COVID-19 is “likely to remain strong for the time being”. But the economy thereafter “will follow an improving trend, albeit only moderately”. The economy would be “supported by a recovery in external demand, accommodative financial conditions, and the government’s economic measures.” Risks are “skewed to the downside” though, and BoJ will “continue to examine developments in domestic and overseas economies carefully.”

Wakatabe added that the “the price stability target of 2 percent and the framework of “QQE with Yield Curve Control” have been working well to date”. There is “no need to change them”. The upcoming policy assessment will be conducted “on the manner of operations and various measures such as asset purchases.”

“In conducting the upcoming assessment, I would like to emphasize that the Bank does not intend to tighten monetary easing,” he added. “It also does not aim at only containing costs of policy measures. Rather, the Bank will consider how to be nimble in conducting effective monetary easing while taking care of costs.”

China Caixin PMI Services dropped to 52.0 in January, down from 56.3, missed expectation of 55.5. Markit noted that business activity expanded only modestly amid weaker up turn in sales. Staffing levels increased at slower rate. Input costs inflation accelerated to second-sharpest since early-2012. PMI Composite dropped to 52.2, down from 55.8.

Wang Zhe, Senior Economist at Caixin Insight Group said: “Overall, the manufacturing and services industries continued to recover in January, but the momentum of both supply and demand weakened, dragged by subdued overseas demand. The employment market was under pressure, especially in manufacturing. In addition, we should be careful about rising inflationary pressure in the coming months. This year, we need to keep an eye on the effectiveness of domestic epidemic prevention, and look at how to add momentum to the Chinese economy as uncertainties about overseas demand continue.” 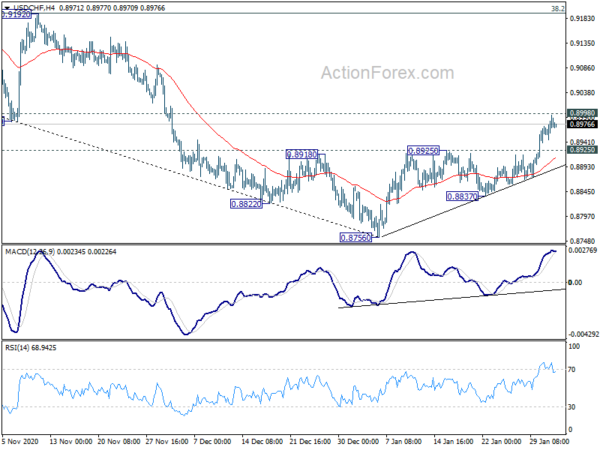 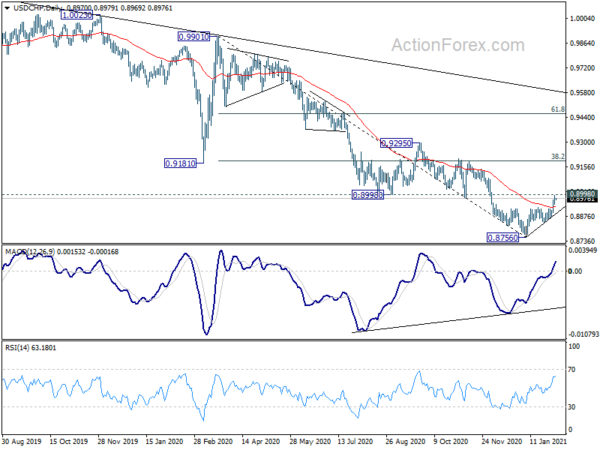