Surging global yields remain the major focus today, with Germany 10-year bund yield hitting as high as -0.234, while UK 10-year gilt yield reaching as high as 0.818. Earlier in Asia, Japan 10-year JGB yield closed strongly at 0.152. US 10-year yield is also trading above 1.45. In the currency markets, Euro is trying to have a come back today and is currently trading as the strongest, followed by Canadian and then Aussie. Yen and Swiss Franc remain the weakest while Sterling softens as recent rally seems exhausted.

Technically, EUR/USD’s break of 1.2188 resistance should set the stage for further rise to retest 1.2348 high. EUR/GBP is worth a watch to gauge the strength of Euro’s rebound. Extending yesterday’s recovery, focus is now on 0.8653 minor resistance in EUR/GBP. Break there will indicate short term bottoming and bring strong rise back to 0.8737 support turned resistance. 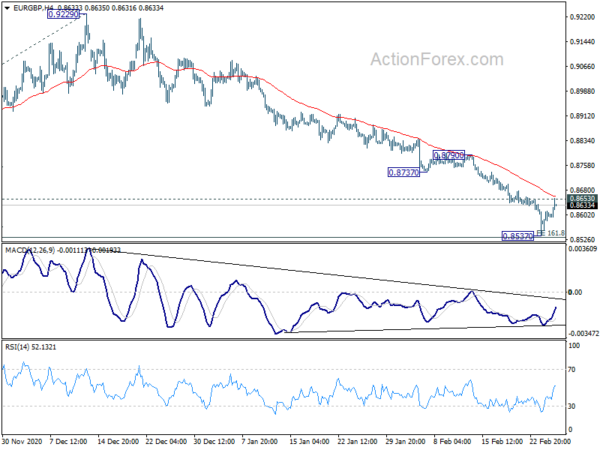 Q4 GDP growth was revised up to 4.1% annualized, according to the second estimate. That compared to Q3’s 33.4% annualized growth. The increase in real GDP reflected increases in exports, non-residential fixed investment, PCE, residential fixed investment, and private inventory investment that were partly offset by decreases in state and local government spending and federal government spending. Imports, which are a subtraction in the calculation of GDP, increased.

Within the broad-based set of indicators, “the downstream conditions facing the households and firms that rely on bank-based credit play a prominent role,” he said”. “Upstream indicators of risk-free OIS rates and sovereign yields are particularly important”.

“Consumers are recovering to some extent from the shock they suffered after the tough lockdown in mid-December. The recent dip in infection rates and the launch of the vaccination program are fueling hopes of a speedy easing of measures,” says Rolf Bürkl, consumer expert at GfK.

New Zealand ANZ Business Confidence dropped to 7.0 in February, down from December’s 9.4, and preliminary reading of 11.8. Confidence was highest in retails at at 15.6, followed by construction at 12.9, services at 10.8 and manufacturing at 3.6. Agriculture confidence was at -38.1.

ANZ said, “overshoot in demand resulting from the disruptions of 2020 is beginning to dissipate, and we expect the economy to go broadly sideways for a while as it digests the national income hit from the decimated tourism industry and as the housing market cools to something more sustainable.”

From Australia, private capital expenditure rose 3.0% in Q4 versus expectation of 0.6%. 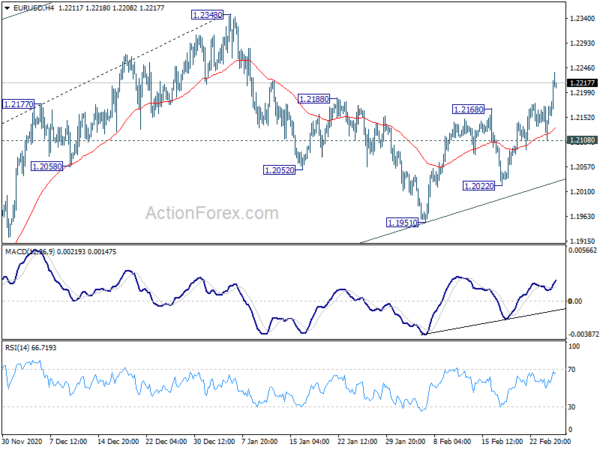 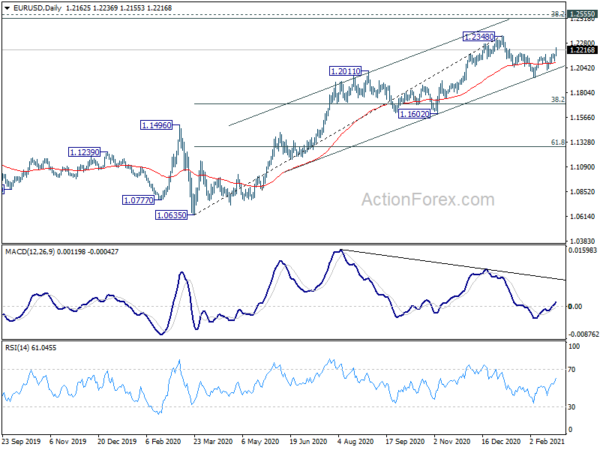