Global treasury yields softened mildly this week, which helped the rebound in US and European stocks yesterday. But the positive sentiment is not much reflected in Asian session today so far. Selloff in Swiss Franc and Yen, and to a lesser extent Euro, appears to be slowing. But these three remain generally weak. Dollar is trying to extend its rebound but struggles to gain momentum against commodity currencies. Australian Dollar is steady after uninspiring RBA statement.

Technically, WTI crude oil appears to be losing much upside momentum just ahead of 65.43 key resistance. Focus is back on 58.57 support and break should confirm the start of a near term correction, at least. That might drag down the Canadian Dollar as well overall risk markets. Correspondingly, in this case, we might see CAD/JPY dropping through 83.18 support to start a near term correction too. 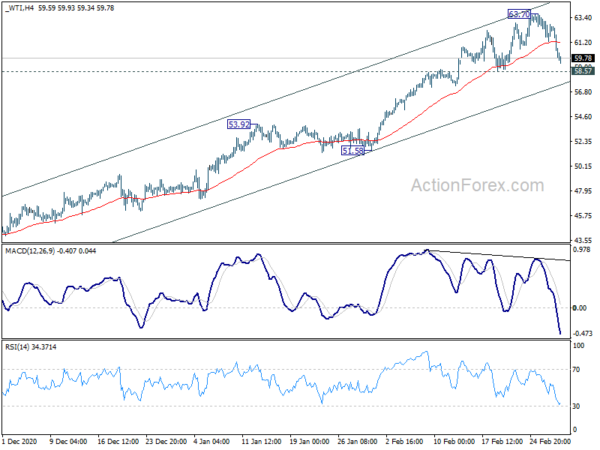 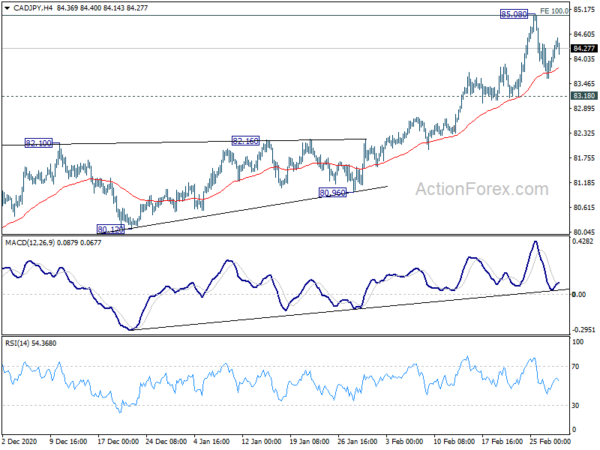 RBA left monetary policy unchanged as widely expected. Cash rate and 3-year yield target are held at 0.10%. Parameters of the Term Funding Facility and the government bond purchase program are kept unchanged too. The central bank also keep the pledge to “maintaining highly supportive monetary conditions until its goals are achieved”. The conditions for raising cash rate is not expected to be met “until 2024 at the earliest”.

The bond purchases were “brought forward this week to assist with the smooth functioning of the market”. A cumulative AUD 74B of government bonds has been purchased under the initial AUD 100B program. A further AUD 100B will be purchases after the current program completes. And RBA is “prepared to do more if that is necessary”.

Globally, RBA noted that longer-term bond yields increased “considerably over the past month”. That “partly reflects a lift in expected inflation over the medium term to rates that are closer to central banks’ targets”. The movement in yields have been associated with volatility in other asset prices including foreign exchange rates, Australian Dollar “remains in the upper end of the range of recent years”.

Australian economic recovery is “well under way” and has been “stronger than was earlier expected”. GDP is expected to grow3.5% over both 2021 and 2022. Also GDP is expected to return to its end-2019 level “by the middle of this year”. But wage and prices pressures “subdued” and are expected to “remain so for some years”. CPI is expected to be at 1.25% over 2021 and 1.50% over 2022. CPI inflation is expected to “rise temporarily because of the reversal of some COVID-19-related price reductions.”

Also from Australia, current account surplus widened to UAD 14.5B in Q4, above expectation of AUD 13.B. Building permits dropped -19.4% mom in January, versus expectation of -3.0% mom.

RBNZ Hawkesby: We are in no hurry to remove stimulus

RBNZ Assistant Governor Christian Hawkesby said today that the central bank is in no rush to remove monetary stimulus. “Markets are keen to get ahead of central banks but there will inevitably be false starts,” he said. “And that is why we are seeing some of the volatility in bond markets at the moment.”

“Our approach is to continually remind markets that we are going to be patient, and we are in no hurry to remove stimulus,” he emphasized. The comment was consistent with the central bank’s message last week, about keeping easy monetary policy for a prolonged period of time.

While New Zealand has reopened earlier than many other countries, “there are pockets, regions and sectors that are still struggling”, Hawkesby said.

Japan unemployment rate was unchanged at 2.9% in January, slightly better than expectation of 3.0%. Job availability ratio rose to 1.10, up from 1.05. The data suggested that new job offers are rebounding, leading to resumption of recovery later in the quarter. “We can’t deny that the impact of the pandemic was felt but concerns that the state of emergency would worsen (the jobless rate) did not materialize,” an official of the internal affairs ministry said.

Capital spending dropped -4.8% in Q4, much worse than expectation of -2.0%. That’s the third straight quarter of decline, after the sharp -10.6% contraction in Q3. The data argued there might be downward revision in the 12.7% annualized Q4 GDP growth.

Also released, monetary base rose 19.6% yoy in February, versus expectation of 20.1% yoy rise.

Germany retail sales and unemployment will be featured in European session. Eurozone CPI flash will also be released. Later in the day, Canada GDP will be a focus.

Intraday bias in AUD/USD is turned neutral with 4 hour MACD crossed above signal line. Consolidation from 0.8006 might still extend. But overall, outlook will remain bullish as long as 0.7563 support holds. On the upside, above 0.7844 minor resistance will turn bias to the upside for retesting 0.8006. Break till extend larger up trend from 0.5506. However, decisive break of 0.7563 will bring deeper correction. 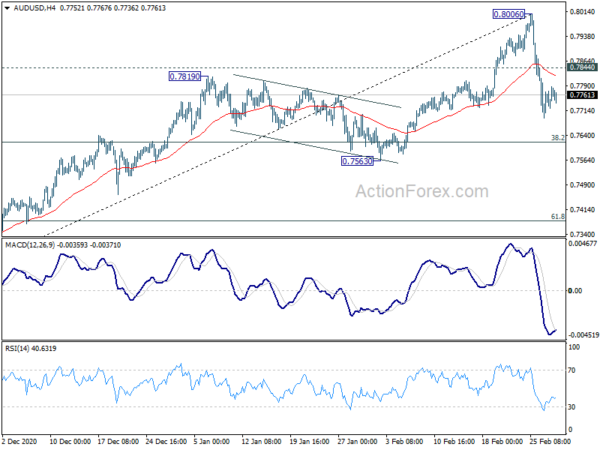 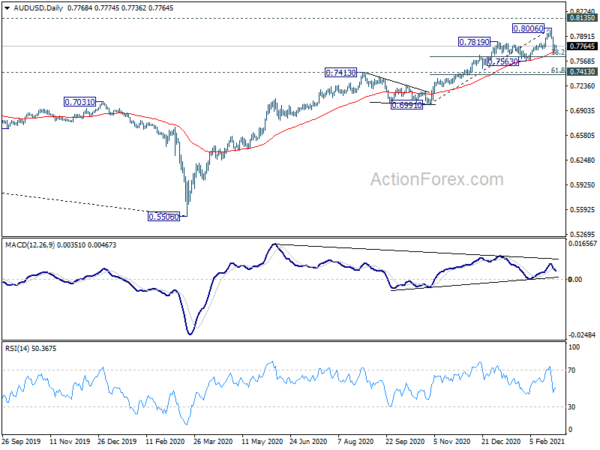