Selloff in Yen and Swiss Franc remain a main theme in the markets in Asia today, while Euro is also weak. Dollar is staying firm but it’s struggling to extend gain against commodity currencies and Sterling for now. Indeed, Aussie and Loonie are now trying to reverse some of this week’s losses against the greenback. Rally in US treasury yields continues to be a main driving force overall, as supported by upbeat comments from Fed officials Focuses will turn to US ADP job report today, as prelude to Friday’s non-farm payrolls.

Technically, EUR/USD is going to enter into an important support zone between 1.1602 and 38.2% retracement of 1.0635 to 1.2348 at 1.1694. We’re expecting strong support from this zone to complete the correction from 1.2348. But firm break there will raise the odds of larger bearishness, that could shape the trend for Q2 at least. 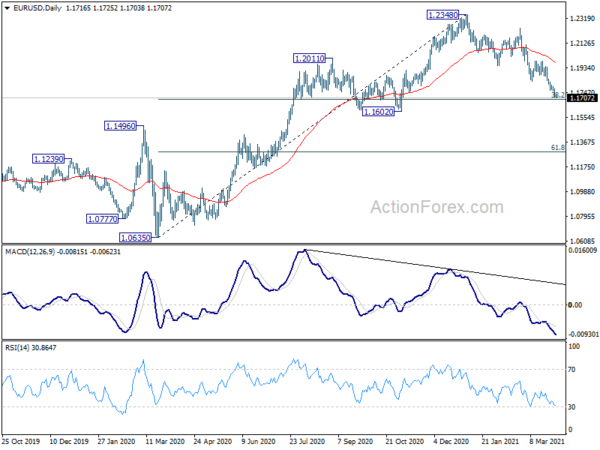 Japan industrial production dropped -2.1% mom in February, worse than expectation of -1.3% mom. In addition to pandemic restrictions, production was disrupted by the 7.3-earthquake off the coast of eastern Japan on February 13.

Manufacturers surveyed by the Ministry of Economy, Trade and Industry expected output to drop another -1.9% mom in March, followed by 9.3% mom rebound in April. But the actual figure could be worse as the impact of the March 19 fire at a Renesas Electronics chip-making plant was not reflected in the forecasts yet.

“After the Lunar New Year, the recovery of production accelerated, and the manufacturing industry rebounded significantly in March,” said Zhao Qinghe, a senior statistician at the NBS. “As the results of pandemic controls being consolidated, consumer demand continues to be released, and the service industry accelerated its recovery.”

ANZ said: “The March snap lockdowns make Business Outlook data a little harder to interpret. However, it is consistent with our view that as the demand overshoot wanes and the tourists are missed more and more, the economy will go largely sideways this year. The quicker cooling we now expect in the housing market plays into this theme as well. The vaccine rollout and the subsequent border re-opening will be game-changers, though it won’t be click-of-a-switch stuff. But there’s a path to the new normal, whatever precisely that looks like, and we’re on it. We’ll be keeping an eye on construction for possible bumps in the road.”

Some Fed official expressed their optimism over the economic recovery ahead. Atlanta Fed President Raphael Bostic said, “we could see a burst of activity and performance coming into the summer which could lead us to see even more robust recovery.” He’s upbeat about the economy, as “a million jobs a month could become the standard through the summer.”

Richmond Fed President Thomas Barkin said he’s “bullish” on the economy this year. “People just have a lot of money in their pockets,” he said. The money will be spent as people are comfortable to go out again. that would help fuel growth into 2022 and 2023 too.

Fed Vice Chair Randal Quarles said he’s “one of the biggest optimist” on the economy. Yet, “we shouldn’t jump the gun. Let’s wait until we see those outcomes,” he added. “And clearly the performance of the macro economy, and the performance of monetary policy, not just over the last decade but really even 15, 20 years, would argue that that leads to superior outcomes.”

Later in the day, US will release ADP employment, Chicago PMI and pending home sales. Canada will release GDP, IPPI and RMPI.

USD/JPY’s rise accelerates to as high as 110.95 so far. Intraday bias stays on the upside for 111.71/112.22 resistance. Firm break there will solidify medium term bullishness. On the downside, below 110.17 minor support will turn intraday bias neutral and bring consolidations first. But outlook will remain bullish as long as 108.40 support holds, in case of pull back. 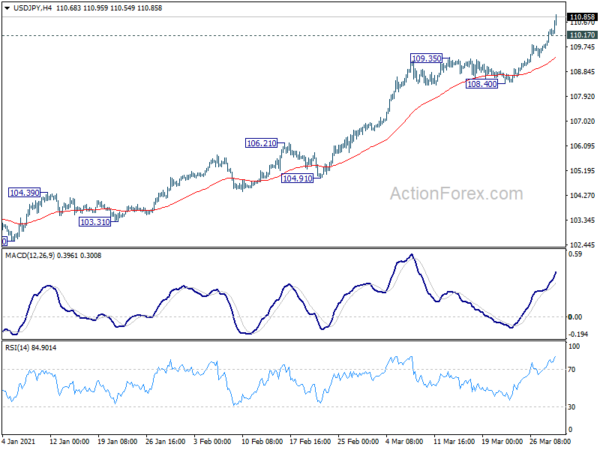 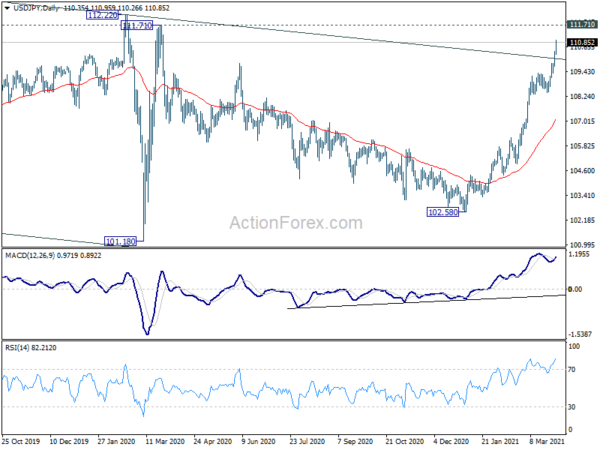 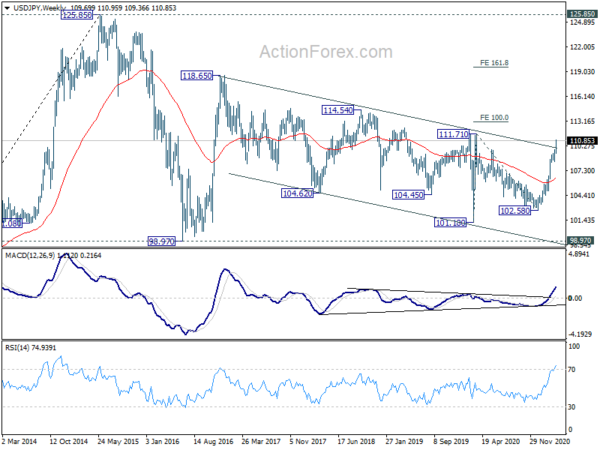