While US stocks hit another record high overnight, the path reversed with the three major indexes closing lower, with particular heavy selling in NASDAQ. Bearish sentiment continues in Asia session today, with Nikkei and Hong Kong HSI in deep red. Reactions in currency markets are mild, however, with commodity currencies just in shallow retreat. Yen is also not gaining much from risk aversion. Almost all major pairs and crosses are trading inside yesterday’s range so far.

Technically, Sterling will remain a focus for today. EUR/GBP’s breach of 0.8587 support suggests that deeper fall is under way to retest 0.8470 low. GBP/USD is also on track to retest 1.4240 high and break will resume larger up trend. We’d pay special attention to GBP/CHF, which is pressing 1.2733 resistance now. Sustained break there will indication completion of the correction from 1.3070. Stronger rally would then be seen back to retest this high. Such development could spillover to more strength in the Pound elsewhere. 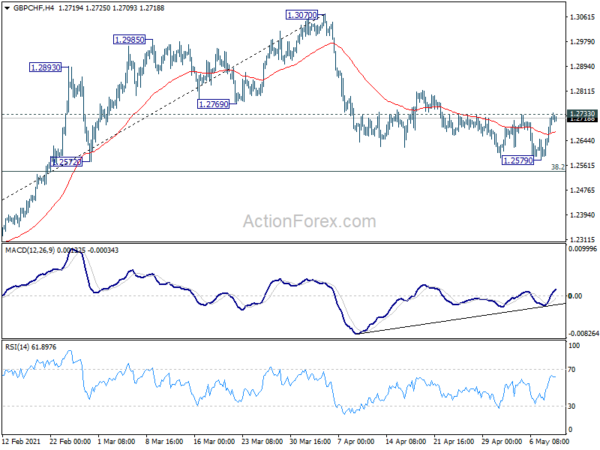 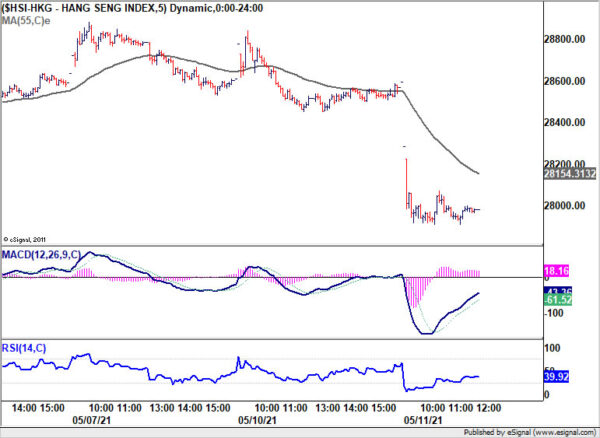 In the Summary of Opinions of BoJ’s April 26-27 meeting, board members noted that risks to economic activity are “skewed to the downside” due to the impact of COVID-19, including the “current spread of variants” and “recent reinstatement of state of emergency”. Also uncertainties remain high, such as “progress with vaccinations”.

One member warned, “if vaccinations do not proceed smoothly in Japan in contrast to the progress abroad, it is concerning that the country might be left behind even in terms of economic growth.”

One member also noted, “in order to bring Japan’s economy back onto a growth path early, it is important to have an acceleration in the pace of vaccinations while mitigating deterioration in consumer sentiment and volatile movements in financial markets.”

Another member also said, “reflecting differences in progress with vaccinations and policy responses, varied and uneven developments have been seen across regions and industries, which can be characterized as K-shaped recovery”. The member added, “there is some possibility that the recovery will stall and policy responses will be terminated prematurely. There also are political and geopolitical risks to a certain extent.

Fed Daly: Not yet time to start thinking about relaxing accommodations

She also noted that “bottlenecks” like shipping costs and lumber shortages would “cause inflation to pop in the next several months”. Inflation might rise above 2% level, but that’s going to be transitory in my judgment,” Daly said.

Chicago Fed President Charles Evans told CNBC yesterday that “hopefully it is a one month kind of thing associated with restarting the economy,” referring to the huge NFP data miss last week. He added, “I am looking for continued strong employment growth the rest of the year”.

“Fed will have to watch carefully how wages impact inflation over time,” he said. “Inflation rates of 2.5% don’t bother me if they are leading the US to average 2% over time.”

He also noted, it’s “going to take quite some time for Fed to see enough data to shift policy.”

ECB Executive Board member Isabel Schnabel said that German inflation “may well exceed 3%” this year. Be she emphasized that “our monetary policy strategy is medium-term and that means that we look through all these short-term fluctuations”.

Separately, chief economist Philip Lane said yesterday that at June meeting, “we can increase or decrease our purchases depending on what is necessary to keep financing conditions favorable.”

Italy industrial output, Germany ZEW economic sentiment will be released in European session. US will release NFIB business optimism later in the day.

USD/CAD’s decline is still in progress and intraday bias stays on the downside for 1.2061 long term cluster support. We’d be cautious on strong support from there to bring reversal. On the upside, break of 1.2265 support turned resistance will turn bias back to the upside for stronger rebound. However, sustained break of 1.2061 will carry larger bearish implications. Next near term target will be 161.8% projection of 1.2880 to 1.2363 from 1.2653 at 1.1816. 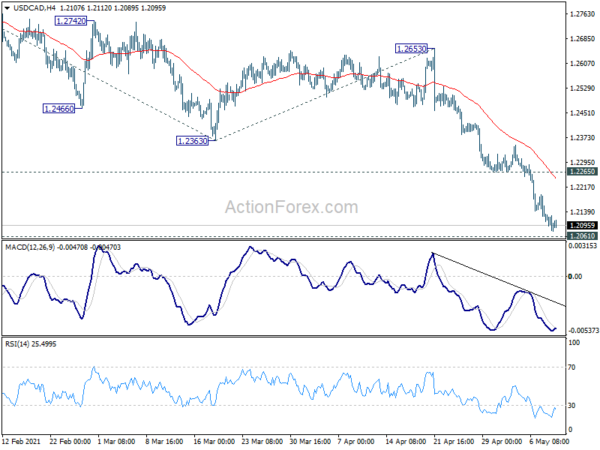 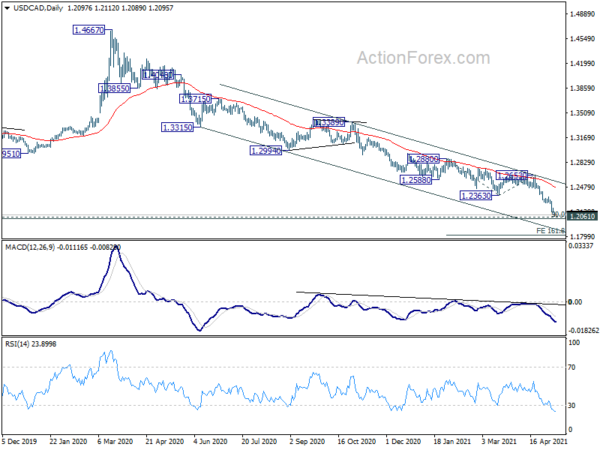