Dollar surges sharply against Yen today and maintains gain after better than expected job data. Though, the greenback is retreating mildly against other major currencies, as traders are probably lightening up their positions first ahead of tomorrow’s non-farm payrolls. Comments from ECB and BoE officials gave Euro and Sterling some support. But they’re not enough to trigger a notable rebound. Meanwhile, commodity currencies turned mixed. European stock indexes are trading in slight black but US futures are mixed. 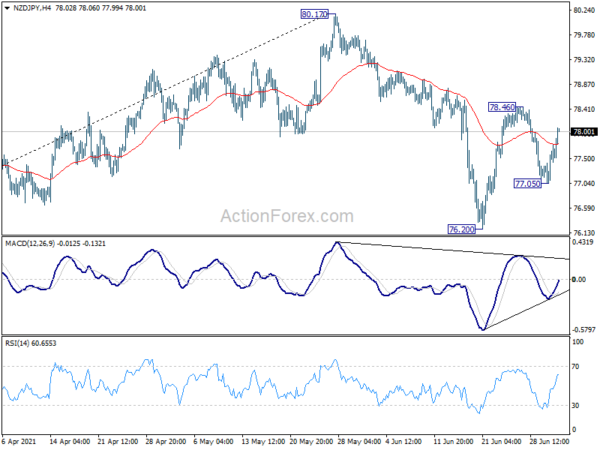 US initial jobless claims dropped to 364k, better than expected

ECB President Christine Lagarde said “the improved economic outlook on the back of rapid progress in vaccination campaigns has reduced the probability of severe scenarios.” But, “the nascent recovery still faces uncertainty also due to the spread of virus mutations.”

Meanwhile, the European Systemic Risk Board warned in a report that spillover effects from higher US bonds yields “could weigh on EU economic activity if the steepening of the yield curve were to perceptibly precede the economic recovery in the EU.”

“A perceptibly-stronger-than-currently-observed rise in European sovereign bond yields could have an adverse impact on debt dynamics, most notably in countries that already entered the COVID-19 crisis with an elevated debt burden,” the ESRB added.

BoE Bailey: It’s important not to over-react to temporarily strong growth and inflation

BoE Governor Andrew Bailey urged in a speech that, “it is important not to over-react to temporarily strong growth and inflation, to ensure that the recovery is not undermined by a premature tightening in monetary conditions.”

Though, he admitted, “it is also important that we watch the outlook for inflation very carefully, which of course we do at all times, particularly for signs of more persistent pressure and for a move of medium term inflation expectations to a higher level.”

“And if we see those signs, we are prepared to respond with the tools of monetary policy,” he pledged.

PMI Manufacturing was finalized at 52.4 in June, down from May’s 53.0. Markit said output and new orders both rose at softest rates for five months. Input prices rose at fastest pace in over 10 years. Optimism was strongest on record.

Intraday bias in USD/JPY remains on the upside for 111.71 resistance. Sustained break there will carry larger bullish implication. Next target is 61.8% projection of 102.58 to 110.95 from 107.47 at 112.64. On the downside, break of 110.41 support is needed to indicate short term topping. Otherwise, outlook will stay bullish in case of retreat. 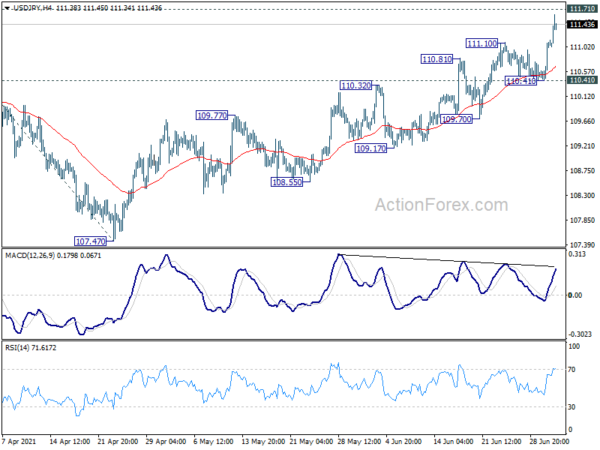 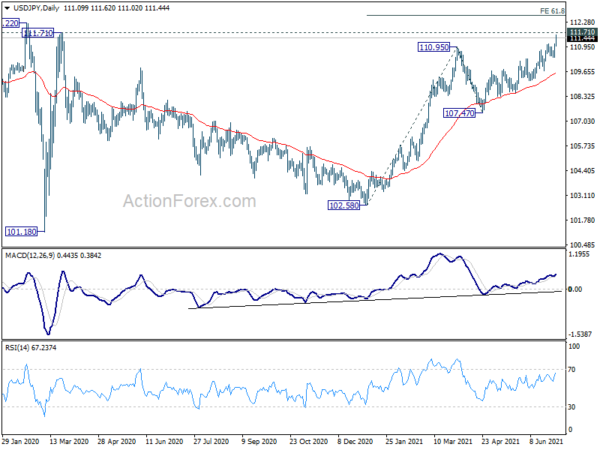