Dollar rebounds strongly in early US session after much stronger than expected CPI inflation reading. The headline reading has indeed been trend up every month since January and showed no sign of slowing yet. Yen also rebounds following the greenback. Meanwhile Sterling and Canadian Dollar are the weakest ones for today for the moment.

Technically, focus will now be on near term resistance for the greenback. In particular, levels to watch include 1.1780 support in EUR/USD, 1.3730 support in GBP/USD, 0.7480 support in AUD/USD, and 1.2589 resistance in USD/CAD. Dollar will need to overcome these levels to confirm that it’s resuming near term rally. Otherwise, the moves are just seen as another leg inside range patterns.

Fed Bullard: The time is right to pull back emergency measures

St. Louis Fed President James Bullard said in a WSJ interview, “I think with the economy growing at 7% and the pandemic coming under better and better control, I think the time is right to pull back emergency measures.”

Bullard also said recent fall in bond yields was a “bullish” development. He’s “comfortable with the idea that the economy will continue to grow very robustly through the second half of this year, and go through the first half of 2022, and all of 2022.”

In an FT interview, ECB President Christine Lagarde said the old inflation target of “below, but close to, two per cent” was “vaguely ambiguous and a little bit complex”.  The target with the new strategy was a “simple, solid, symmetric two per cent target”

The 2% target now is “solid because it gives us space to manoeuvre our monetary policy, it is a well-accepted measurement of price stability around the world and it limits the welfare cost of too high inflation.”

She added that the third “s” of symmetry is really important, because “we affirm very clearly that there may be deviations up or down… we know that it’s not going to be a straight two per cent linearly forever once we reach the target and we’ll recognise that it will oscillate around two per cent. ”

Lagarde also said ECB’s policy rebound will be especially forceful or persistent”, intending to signal that” we will not prematurely tighten”.

“After reaching a record high last month, business conditions pulled back in the month. The decline in conditions was broad-based across states but led by a significant decline in Victoria coming off the back of the lockdown that started in late May but was eased, in a series of steps, over June” said NAB.

“Confidence took a hit in the month with the survey undertaken in the week of the NSW lockdown and with some overlap to brief shutdowns in the smaller capitals. The threat of closing borders also appears to have weighed everywhere”.

EUR/USD dips notably in early US session, but stays above 1.1780 temporary low. Intraday bias remains neutral first. Considering bullish convergence condition in 4 hour MACD, beak of 1.1894 minor resistance will indicate short term bottoming at 1.1780. Corrective pattern from 1.2348 might have completed too. Intraday bias will be turned back to the upside for 1.1974 resistance for confirmation. Sustained break there will pave the way back to 1.2265/2348 resistance zone. On the downside, break of 1.1780 will extend the correction to retest 1.1703 support instead. 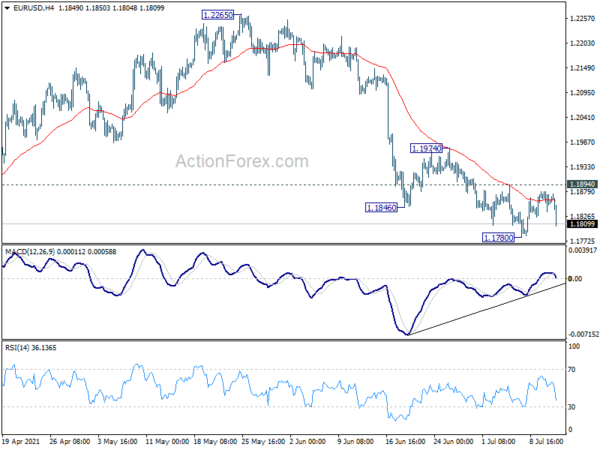 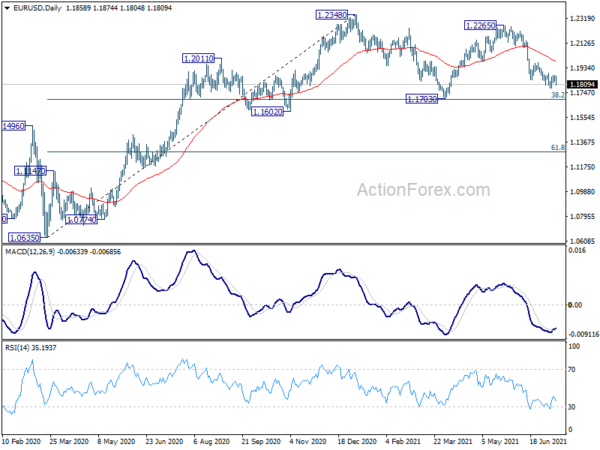