Dollar is back under selling pressure in early US session after all the way bad non-farm payroll report. NFP showed only 156k growth in August, below expectation of 180k. Prior month’s figure was revised down from 209k to 189k. Unemployment rate rose to 4.4%, up from 4.3%. And more disappointingly, average hourly earnings grew a mere 0.1% mom, below expectation of 0.2% mom and slowed from prior month’s 0.3% mom. EUR/USD took out 1.1928 minor resistance and should have completed this week’s pull back. Further rise is now in favor through 1.2 handle back to retest 1.2069 high. USD/CAD dives through 1.2412 low and is now resuming medium term down trend. US will also release ISM manufacturing later today but it’s unlikely to help the greenback.

Former ECB President Jean-Claude Trichet said that there are a lot of factors behind Euro’s strength. One of them is that "real economy in Europe is picking up now very, very visibly." But he emphasized that "U.S. difficulty and particularly the hesitation on what to do as regards (with) new investment, as regards (with) taxation and so forth – and the difficulty of the present (U.S.) administration are playing also an important role. And, "because the problem is more that the dollar is weak vis-à-vis all currencies (rather) than the euro is very strong vis-à-vis all currencies."

According to a Reuters poll, nearly 3/4 of 66 economists surveyed expected ECB to announce a change in the quantitative easing program in October. Only 15 expected it at the September 7 meeting next week. All respondents expected that ECB will extend the asset purchase beyond December, but reduce the monthly amount from EUR 60b. Most expected a EUR 20b reduction to EUR 40b a month. Meanwhile, 58 of 63 economists who answered an extra question said ECB will completely end the asset purchase by the end of next year. Among them, 10 expected it to end by June.

In our report ECB Policy Stance Not to be Affected by Strong Euro, we also argue that recent strength is due to the unattractiveness of other currencies. And, while September may not be the timing for an announcement, the strength of Euro is unlikely to alter ECB’s stance. And the central bank will still conclude the tapering plan latest in October.

More verbal changes between EU and UK on Brexit

The verbal exchanges between EU and UK officials regarding Brexit negotiation continue to heat up. EU Parliament’s Brexit coordinator Guy Verhofstadt said that "UK ministers seem to want to devise a new customs union and seek to recreate all of the EU’s structures, in order to continue to benefit from the best elements of the EU, without it being called the EU". He criticized that as "not serious, fair or even possible given the negotiating time remaining". Verhofstadt emphasized that "The UK has informed us it is leaving, which we regret — but all we have ever asked for is that this disruptive decision is implemented in an orderly fashion and that we first agree to the divorce before planning a new future together."

UK International Trade Secretary Liam Fox hit back at EU chief negotiator Michel Barnier, who said that UK is being mired in "nostalgia" rather than taking a realistic approach in the Brexit negotiation. Fox said that "We can’t be blackmailed into paying a price on the first part". And, we think we should begin discussions on the final settlement because that’s good for business, and it’s good for the prosperity both of the British people and of the rest of the people of the European Union."

Meanwhile, UK’s Brexit Secretary David Davis said that the’s a "determined optimist" about Brexit talks. "Because I fundamentally believe that a good deal is in the interests of both the UK and the EU and the whole of the developed world." And he emphasized that "the answer to that concern is not to turn inwards and become isolationist. And that is where a strong, outward looking United Kingdom can play an instrumental role."

There are only two more rounds of meeting scheduled before EU summit on October 19-20. It’s looking rather unlikely that "sufficient progress" would be made by then for moving on to trade agreement.

UK PMI manufacturing rose to 56.9 in August, up from 55.1, beat expectation of 55.0. That’s also the highest level in four months. Director at IHS Markit Rob Dobson noted in the statement that "the manufacturing economy remains in good health despite Brexit uncertainty". And, that "should help support ongoing growth in the economy in the third quarter, which will add fuel to hawkish policy makers’ calls for higher interest rates."

China PMI Caixin PMI manufacturing rose to 51.6 in August, up from 51.1, above expectation of 51.0. Caixin and IHS Markit noted in the statement that "companies expanded their production schedules and buying activity, while business confidence rose to its highest for five months." And, that was result of solid foreign demand that drove new order growth and export sales. Zhengsheng Zhong, Director of Macroeconomic Analysis at CEBM Group, also said in the accompanying statement that "overall operating conditions of the manufacturing sector improved further as market demand strengthens, but if prices rise too quickly the profitability of companies in the middle of a supply chain may be under pressure."

Also released in Asian session, Japan consumer confidence dropped to 4.3.3 in August, down from 43.8 and missed expectation of 43.6. PMI manufacturing was revised down to 52.2 in August. Capital spending rose only 1.5% in Q2. From New Zealand, terms of tarde index rose 1.5% qoq in Q2, below expectation of 3.0% qoq.

EUR/USD’s strong rebound suggests that pull back from 1.2069 has completed at 1.1822 already. Intraday bias is turned back to the upside for retesting. 1.2069 first. Break there will resume medium term rise from 1.0339 and should target next key fibonacci level at 1.2516. On the downside, below 1.1878 minor support will extend the correction from 1.2069 with another fall. But downside should be contained well above 1.1661 support to bring rally resumption. 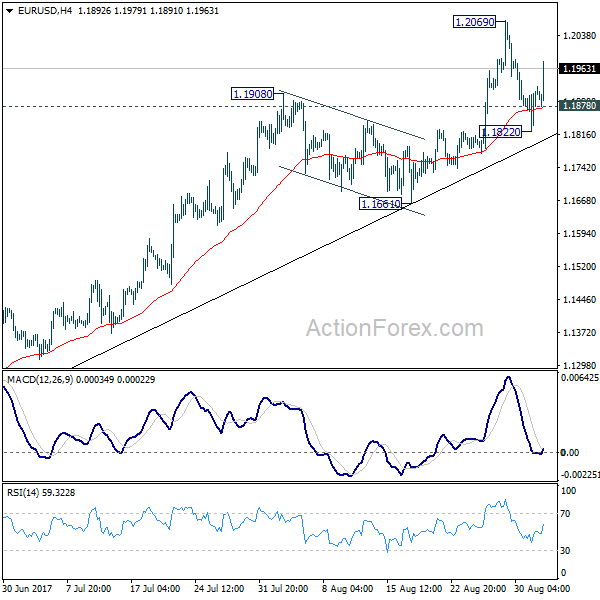 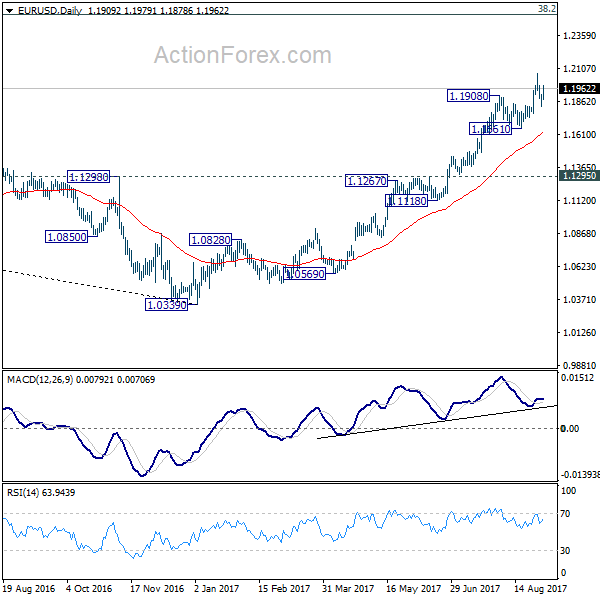 Weekly Economic and Financial Commentary: A Solid Week To Be Sure, But Keep an Eye on the Details

US Employment (Still) Strong in January

Dollar Firm after Strong NFP Growth, But No Follow Through Buying Yet

Oil Under Pressure As Russia Refuses To Cut Production. NFP In Focus

EU Morning: Cable On The Back Foot