Risk-on sentiment firms up slightly after better than expected jobless claims from the US. Dollar, Yen and Swiss Franc continue to trade as the weakest ones. On the other hand, New Zealand and Australian Dollars are the strongest. But the moves in risk markets are limited so far. Investors could turn cautious quickly again and stay calm before tomorrow’s non-farm payroll report.

Technically, NZD/USD’s break of 0.7087 resistance suggests that corrective pattern from 0.7463 could have completed with three waves down to 0.6804 already. Stronger rise would be seen back to 0.7315 resistance. Break will likely resume larger up trend from 0.5467 through 0.7463 high. We’ll firstly see if NZD/USD’s move could extend into next week. Secondly, we’ll pay attention to whether AUD/USD would follow and break through 0.7425 resistance. 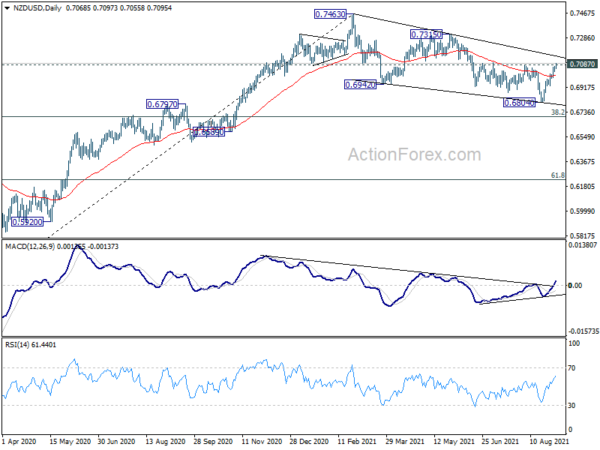 Australia goods and services exports rose 5% mom in July to AUD 45.94B. The strong rise is exports was based on strong Asian demand for LNG and thermal coal, combined with sharply higher prices for iron ore. Exports to China also rose to record AUD 19.4B. Goods and services imports rose 3% mom to AUD 33.83B, due to sharp increase in parts and accessories for telecommunications equipment.

Trade surplus widened to AUD 12.12B, above expectation of AUD 10.1B., hitting a new record.

BoJ board member Goushi Kataoka, a known persistent dove, warned that the Japan economy remained in a “severe state”. The economy is heading toward recovery but “not fast enough.

He added that risks to the outlook are skewed to the downside. In particular, “risks to consumption are heightening” due to surge in Delta infections. “There’s a good chance the impact of the pandemic may last longer than expected,” he added.

Kataoka also continued his push for more aggressive monetary policy easing. “Personally, I believe the BoJ must strengthen monetary easing,” he said, as inflation would remain distant from the 2% target for years.

With 1.1778 minor support intact, intraday bias in EUR/USD remains mildly on the upside. Rise from 1.1663 short term bottom is on track to 1.1907 resistance first. Decisive break there will indicate that fall from 1.2265, as well as the consolidation pattern from 1.2348, have completed. Near term outlook will be turned bullish for 1.2265/2348 resistance. On the downside, break of 1.1778 resistance turned support will turn bias back to the downside for 1.1602/63 support zone instead. 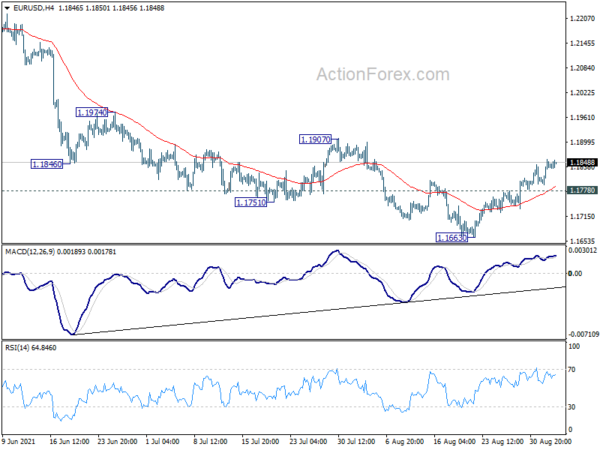 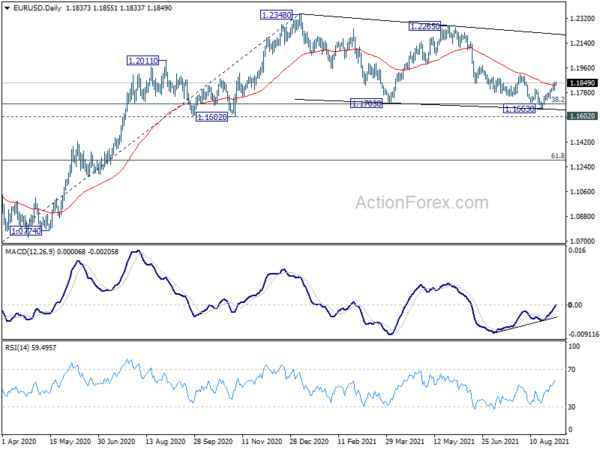