Strong rally in treasury yields is currently the main theme driving the markets. On the back on hawkish Fed rhetorics, 2-year yield rose to 18-month high, above 0.3%. Benchmark 10-year yield also breaks above 1.5% handle. Yen is currently the worst performing one, with persistent selling pressure. Euro and Swiss Franc are also weak. On the other hand, commodity currencies are the better performers, as led by Canadian, with WTI oil breaching 76 handle. Dollar is mixed for the moment, partly supported by the strength in yield.

Technically, CAD/JPY’s break of 87.87 resistance, as well as the sustained trading above 55 day EMA, suggests that correction from 91.16 has completed at 84.65. Immediate focus is now on 88.44 resistance. Decisive break there will further affirm this bullish case and bring retest of 91.16 high. At the same time, USD/JPY is also accelerating up towards 111.65/71 key resistance zone. Sustained break there will carry larger bullish implication. We’ll see if Yen’s selloff would extend, or even accelerate, for the rest of the week. 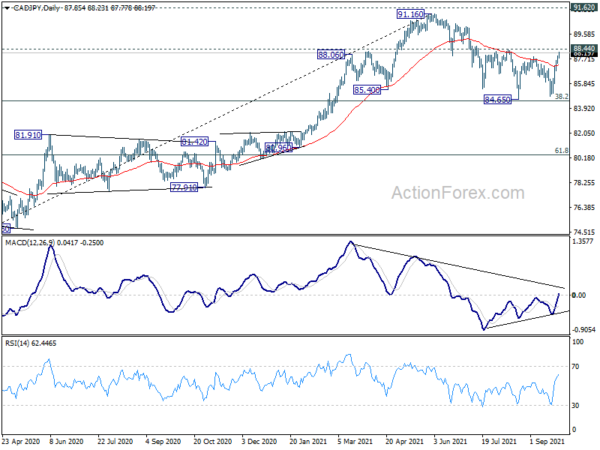 Fed Brainard: Bar much higher for rate hike than tapering

Fed Governor Lael Brainard said “employment is still a bit short of the mark on what I consider to be substantial further progress.. But if progress continues as I hope, it may soon meet the mark,” for tapering asset purchases.

“The forward guidance on maximum employment and average inflation sets a much higher bar for the liftoff of the policy rate than for slowing the pace of asset purchases,” she added. “I would emphasize that no signal about the timing of liftoff should be taken from any decision to announce a slowing of asset purchases.”

New York Fed President John Williams said, “assuming the economy continues to improve as I anticipate, a moderation in the pace of asset purchases may soon be warranted.”

Williams expected the economy to grow between 5.5% to 6% this year. Inflation will drop back to 2% next year.

“There is still a long way to go before reaching maximum employment,” Williams said. “And over time it should become clearer whether we have reached 2 percent inflation on a sustained basis.”

Both Minneapolis Fed President Neel Kashkari and Atlanta Fed President Raphael Bostic appeared to be more concerned with getting the job market back to normal, than the higher transitory inflation.

Kashkari said yesterday, “putting Americans back to work…to me that’s our highest priority.” He also emphasized “we don’t want to overreact to short-term price movements.”

Separately, Bostic said, “without clear data demonstrating that an inflationary problem has arrived and is likely to last, we will allow labor markets to run their course, which can further our pursuit of long-run maximum employment.”

In the minutes of BoJ’s July meeting, a few members said “the timing of a full-fledged recovery in Japan’s economy was likely to be somewhat delayed” comparing with the expectations in April.

Many members warned of the high uncertainty on overseas outlook. In particular, one member noted the deceleration in China’s economy “should be born in mind.” Also, one member warned, “if the rise in U.S. long-term interest rates accelerated, we must be vigilant to the risk of capital outflows from emerging economies.”

Ben James, Director of Quarterly Economy Wide Surveys, said: “Retail turnover continues to be negatively impacted by lockdown restrictions, with each of the eastern mainland states experiencing falls in line with their respective level of restrictions. In direct contrast, states with no lockdowns performed well with Western Australia and South Australia enjoying strong rises as physical stores were open for trade.”

USD/JPY’s rally is still in progress and intraday bias stays on the upside for retesting 111.65 high. Larger up trend from 102.58 might be ready to resume. Decisive break of 111.65/71 will confirm this case and carry larger bullish implication. Nevertheless, on the downside, below 110.52 will delay the breakout and turn intraday bias neutral first. 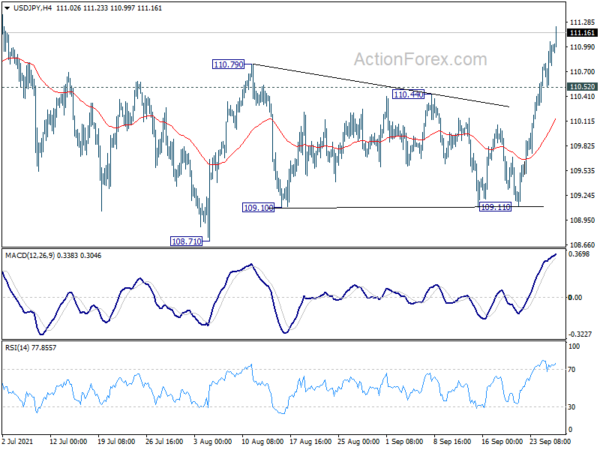 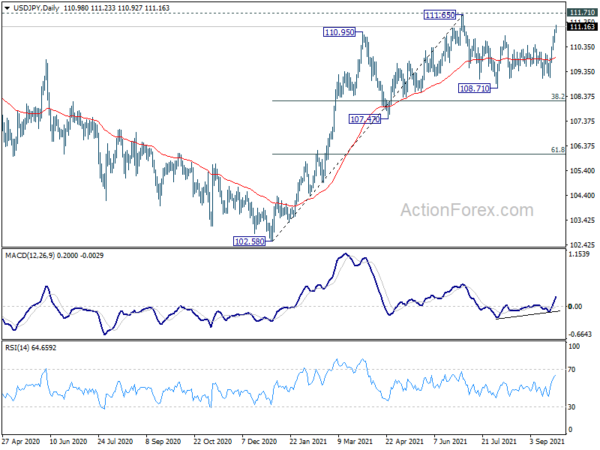