Canadian Dollar soars sharply in early US session after BoC shocked the markets by raising overnight rate by 25bps to 1.00%. Correspondingly, the Bank rate is lifted to 1.25% and deposit rate to 0.75%. While there were speculations of a rate hike, markets generally believed that BoC will hold their hands till October, as it has just raised interest rate back in July. Nonetheless, after the rate hike, BoC remains open to further tightening It noted that "future monetary policy decisions are not predetermined and will be guided by incoming economic data and financial market developments as they inform the outlook for inflation." Meanwhile, it doesn’t sound concerned with strength of the Canadian Dollar as it is "reflecting the relative strength of Canada’s economy."

BoC noted that "recent economic data have been stronger than expected, supporting the Bank’s view that growth in Canada is becoming more broadly-based and self-sustaining." While BoC still anticipate moderation of growth in second half, "the level of GDP is now higher than the Bank had expected." Inflation remains below 2% target but recent pick up is "consistent with the dissipating negative impact of temporary price shocks and the absorption of economic slack." Overall, given the stronger-than-expected economic performance, Governing Council judges that today’s removal of some of the considerable monetary policy stimulus in place is warranted.

Just ahead of the highly anticipated ECB policy decision and press conference. Germany is piling up pressure for the central bank to start exiting its massive stimulus. German Finance Minister Wolfgang Schäuble said that "unusual monetary policy implies it is not usual or normal – we should get back to a normal monetary policy." And he also pointed out that "we have come back to a normal situation much quicker than people thought."

Deutsche Bank chief executive John Cryan called on the central bank to end the ultra low interest rate policy. He urged in a conference that "the era of cheap money in Europe should come to an end – despite the strong euro." He pointed out that "the real economy is doing well, the market is expecting I think an increase in interest rates or a reduction in the negative nature of interest rates… Let’s start doing that."At the same time, ECB’s policies has battered bank’s profitability for some time. And Cryan said that "it can’t be forever that deposit taking is a loss making… for banks."

In UK, the leaked document regarding the government’s post-Brexit immigration plan attracted much criticism from businesses. The chief executive of the British Hospitality Association, Ufi Ibrahim, warned that "if these proposals are implemented it could be catastrophic for the UK hospitality industry." Director general of Food and Drink Federation said that "if this does represent the government’s thinking it shows a deep lack of understanding of the vital contribution that EU migrant workers make – at all skill levels – across the food chain." Manufacturers’ organization EEE’s director of employment and skills said "we would have grave concerns that at lower skill levels accessing EU workers will be on a completely different basis." CBI managing director for people and infrastructure Neil Carberry urged that "an open approach to our closest trading partners is vital for business, as it attracts investment to the UK."

A draft document on UK’s plan for post-Brexit immigration system was leaked to the Guardian and published. The proposals in the document are to be endorsed by ministers and subject to negotiation with EU. But it’s also triggered much controversies as some believed that it targets low skilled EU migrants. Some MPs reacted furiously to the document as criticized it as a "mean and cynical approach". Chair of the home affairs select committee Yvette Copper said the document "seems to contradicts the home secretary’s decision just over a month ago". Meanwhile, German MEP Elmar Brok, who’s one of European Parliament’s Brexit officials, warned that the proposal will " increase the lack of credibility and deepen mistrust". It would make it even harder to reach agreement on divorce by October.

In Japan, former currency head at the Finance Ministry, Hiroshi Watanabe, said that there is no reason for BoJ to wait for inflation to hit target before exiting stimulus. And he criticized that BoJ is "caught on its own trap by insisting inflation has to exceed 2 percent on a consistent basis." He pointed out that the 2% target "isn’t legally binding", and it’s not something BoJ should "strictly adhere to". He said that "just as an endless intravenous drip becomes ineffective, monetary policy should be changed to reduce stimulus once the economy is no longer facing any headwinds." And that would create a "buffer for future needs". Watanabe emphasized that "there is absolutely no reason to deter such a decision by saying we have to wait for inflation to reach 2 percent."

US ISM services rose to 55.3 in August, up from 53.9 but missed expectation of 55.5. Trade deficit widened slightly to USD -3.7b in July. Canada trade deficit narrowed to CAD -3.0b in July. Labor productivity dropped -0.1% qoq in Q2. Eurozone retail PMI dropped to 50.8 in August. German factory orders dropped -0.7% mom in July. Japan labor cash earnings dropped -0.3% yoy in July. Australia GDP grew 0.8% qoq in Q2, in line with expectation.

In the bigger picture, price actions from 1.4689 medium term top are seen as a correction pattern. Such corrective fall is expected to extend to 50% retracement of 0.9406 to 1.4869 at 1.2048. At this point, we’d look for strong support from there to contain downside and bring rebound. Break of 1.2777 resistance will indicate reversal and turn outlook bullish for 1.3793 key resistance. However, sustained break of 1.2048 will dampen this view and carry larger bearish implications and bring deeper decline to 61.8% retracement at 1.1424 and below. 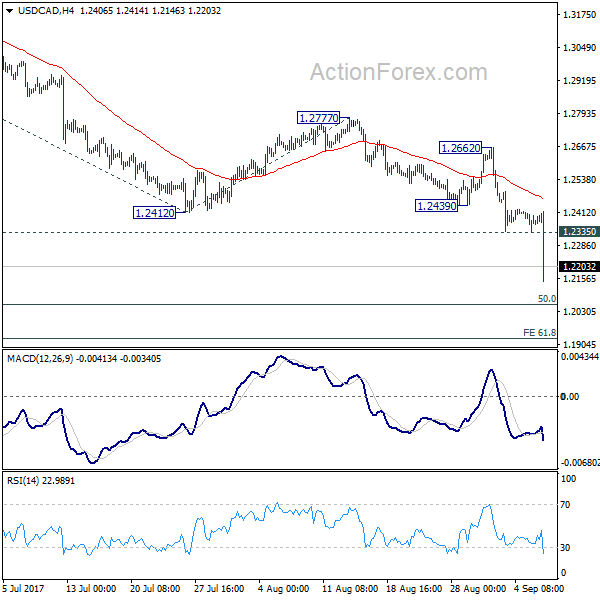 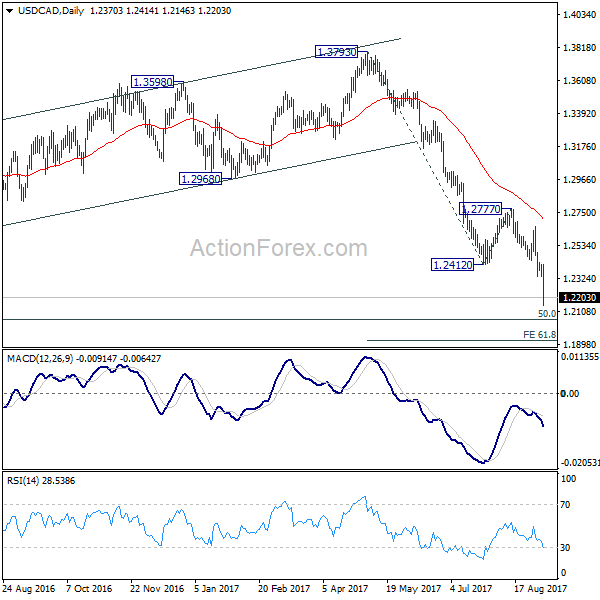 Inflation Ticks up in January, But Core Measures Edge Lower

Canadian Data On The Right Path