Yen’s rally resumes today while overall market sentiments are mixed. Asian stocks are treading water but US benchmark yield takes another dive. Swiss Franc is following as the second strongest for now. On the other hand, commodity currencies are trading broadly lower, as led by Aussie. Euro and Sterling are mixed. Main focuses will now turn to German ZEW economic sentiment and US PPI.

Technically, we’d pay some attention to Gold today, as it now in proximity to 1388.79 key near term resistance again. Decisive break there will finally affirm the case that whole correction from 2074.84 has completed. Stronger rally would be seen to 1916.30 resistance for confirmation. That might come together with some selloff in Dollar elsewhere, in particular against Yen. But break of 1798.67 support will indicate another rejection by 1833.79 and bring near term reversal, which could be accompanied by rebound in Dollar. 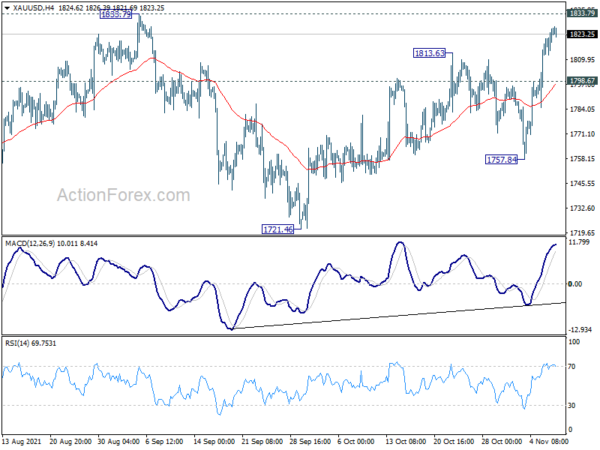 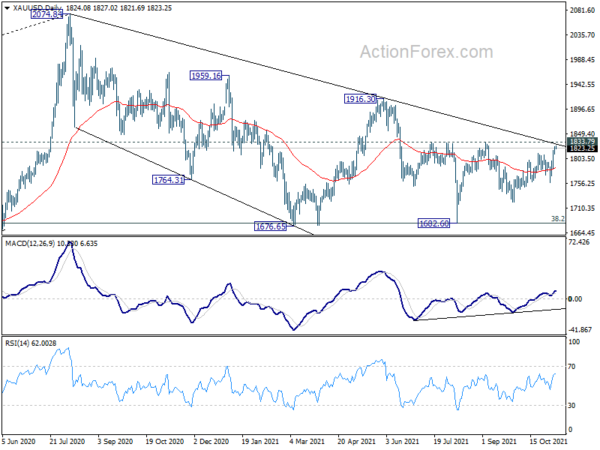 Fed Harker: No rate hike before tapering is complete

Philadelphia Fed President Patrick Harker said yesterday “I don’t expect that the federal funds rate will rise before the tapering is complete.” But he added, “we are monitoring inflation very closely and are prepared to take action, should circumstances warrant it.”

Harker expected the economy to grow by around 5.5% this year and 4% next, provided that there is no further wave of COVID-19 infections. Then growth was slow to 2-3% in 2023.

Chicago Fed President Charles Evans said, “inflation will stay more elevated in 2022”, but “we have time to be patient”. In his own view, Fed will not need to raise interest rates until 2023.

Nevertheless, in a speech, he said there are signs that inflation pressures could build up more broadly. “These developments deserve careful monitoring and present a greater upside risk to my inflation outlook than I had thought last summer.”

Separately, Fed Governor Michelle Bowman said, “housing supply issues are unlikely to reverse materially in the short term, which suggests that we are likely to see higher inflation from housing for a while.”

BoE Bailey: We will have to act on interest rates if evidence becomes clear

BoE Governor Andrew Bailey there was “a risk of more bottlenecks in the economy, especially in demand for labour which could fuel expectations of higher inflation.”

And, “once you start to get an increase in inflation of this sort we want to stop it becoming generalized in the economy.”

“That’s why we would, and will, have to act on interest rates if we see that evidence becoming clear,” he said.

“The large improvement in forward orders provides further evidence of the strong rebound in economic activity that is underway,” said NAB Chief Economist Alan Oster. “Businesses can see that conditions are improving and that momentum should continue over coming months.”

“We are starting to see some price pressures, but these remain largely in the form of pressure on input costs,” said Oster. “These pressures should pull back as global supply chain disruptions ease and labour markets normalise, although this process may take some time yet.”

USD/JPY’s pull back from 114.69 resumes by breaking 113.24 and intraday bias is mildly on the downside. While deeper fall could be seen, we’d still expect downside to be contained above 112.07 resistance turned support to bring rebound. On the upside, break of 113.65 minor resistance will turn bias back to the upside for retesting 114.69. However, sustained break of 112.07 will dampen our bullish view and bring deeper fall back towards 109.11 structural support. 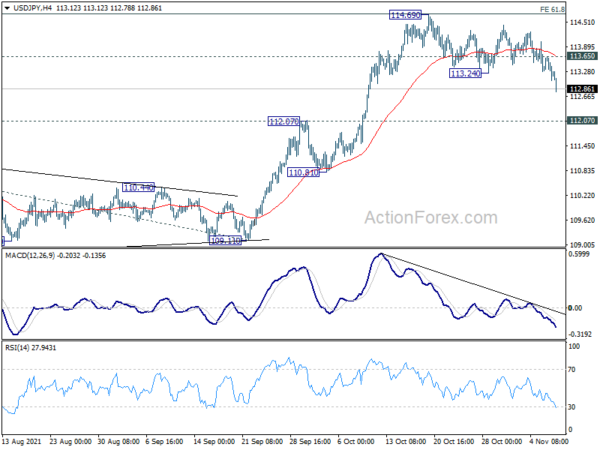 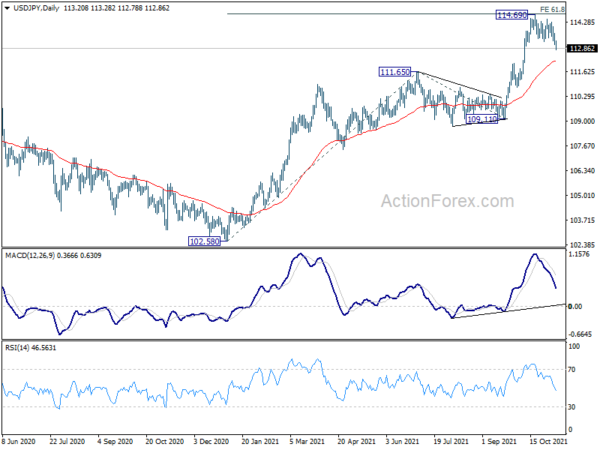