Market sentiment is generally positive in Asian session today. Australian and New Zealand Dollar are extending near term rebound. Other currencies are mixed, though. Canadian Dollar is paring some gains, after the non-eventful BoC rate decision. Sterling is trying to recover from yesterday’s selloff. Dollar and Yen are mixed.

Technically, we’ll pay attention to both AUD/USD and USD/CAD today. AUD/USD is now trying to break through 0.7272 minor resistance. Sustained trading above there should confirm short term bottoming at 0.6992, just after drawing support from 0.6991 medium term support level. Stronger rise should at least be seen back to 55 day EMA (now at 0.7278, with prospect of bullish reversal.

Meanwhile, sustained break of 1.2639 support in USD/CAD would argue that rebound from 1.2286 is completed at 1.2852, and deeper fall would be seen back to 1.2286 support. Both developments, if happen, could affirm that risk-on sentiment is fully back in the markets. 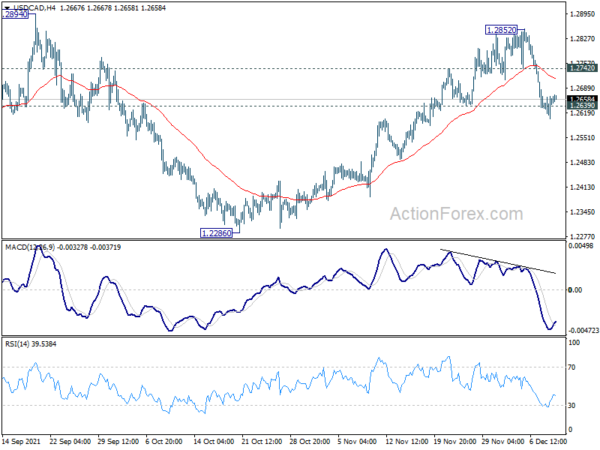 Conditions for mid-sized companies also rose sharply from 0.2 to 10.7. Conditions for small companies rose from -18.0 to -3.0, but stayed negative for the 31st successive quarter.

“With the severe situation caused by the impact of virus infections gradually easing, the survey results showed that (the economy) has been picking up, although some fields remain weak,” a government official told reporters.

“As policies to stabilise prices and ensure supply have stepped up, the rapid surge in coal, metal and other energy and raw material prices has been initially contained, leading to a slowdown in PPI,” NBS senior statistician Dong Lijuan said in a statement accompanying the release.

New Zealand Manufacturing sales dropped -2.2% qoq, or NZD 674m in Q3. When adjusted for seasonal effects, 10 of the 13 manufacturing industries had lower volumes of sales in the quarter.

Germany trade balance and Swiss SECO economic forecasts will be release in European session. Later in the day, US will release jobless claims and wholesale inventories.

Immediate focus is now on 0.7172 resistance in AUD/USD. Sustained break there should confirm short term bottoming at 0.6992. More importantly, whole corrective fall from 0.8006 might be finished too after defending 0.6991 key structural support. Stronger rise should then be seen to 55 day EMA (now at 0.7275). Firm break there will target 0.7555 resistance to confirm this bullish case. On the downside, however, firm break of 0.6991 will carry larger bearish implication and extend the down trend from 0.8006. 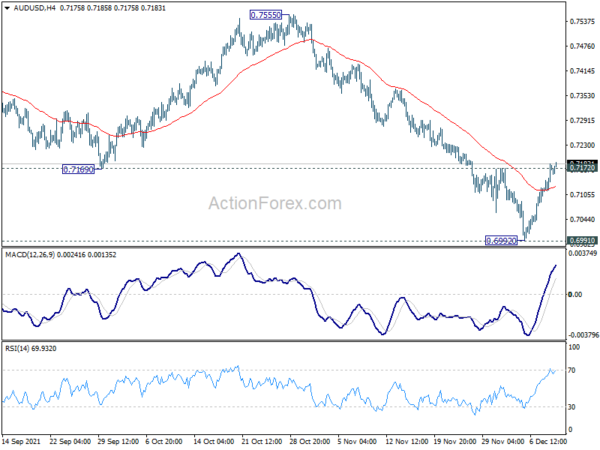 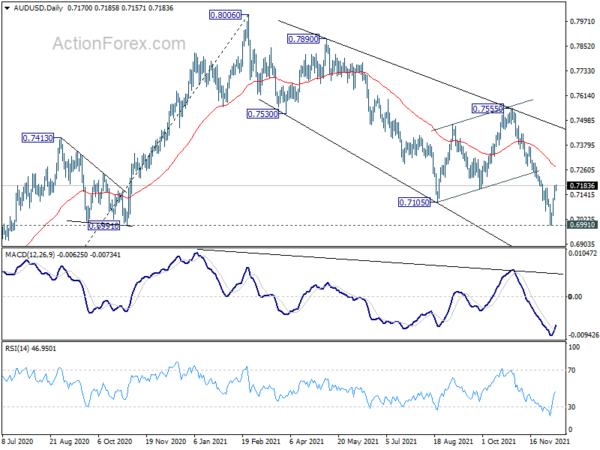