The British Pound surges sharply today as boosted by strong inflation reading. BoE is still widely expected to keep bank rates and asset purchase target unchanged on Thursday. But there is now more reasons for the central bank to reiterate its stance on interest rates. That is, BoE would like to remind households and businesses that markets are under-estimating the scale of interest rate hikes in the coming years. Following Sterling, commodity currencies and Dollar are the strong ones on full return of risk appetite. But Canadian Dollar lags behind as it continues to digest recent gains. Meanwhile, Yen and Swiss Franc remain the weakest ones. Both maintains this week’s loss after United Nations Security Council approved watered down sanctions on North Korea. And risks of immediate military conflicts are much reduced.

The data come just two day ahead of BoE rate decisions. With re-acceleration in headline CPI, there is very little chance that hawks Michael Saunders and Ian McCafferty would change their mind. Both are very likely to continue to vote for a 25bps hike. The question is now on whether chief economist Andy Haldane would finally put his hawkish comments into a vote for hike. But still even, if Haldane votes for hike, two more are needed in the 9-member MPC to approve it. BoE is still generally expected to keep bank rate unchanged at historical low at 0.25%. Money markets are pricing in one-in-three chance of a rise by the end of the year, comparing with one-in-five a week ago. And based on Sonia fixings, markets are pricing in a full 25bps rise by August 2018. 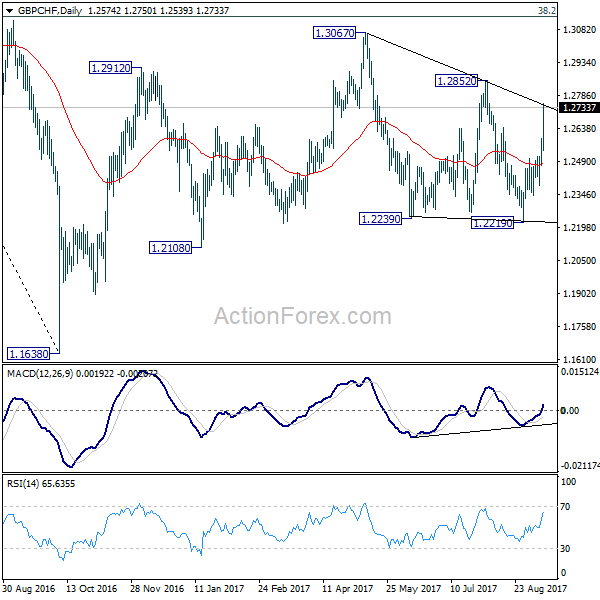 In Germany, ahead of the federal election on September 24, Chancellor Angela Merkel ruled out imposing an upper limit on refugee intake. She told voter yesterday that a cap of refugees entering into Germany would not be "practical". And she "guaranteed" she will reject any such policy. Meanwhile, she also warned Hungary that it’s unacceptable to ignore a ruling by the European Court of Justice. And Hungary must accept refugees under the EU-wide plan.

Based on recent polls, Merkel’s Christian Democrats (CDU) is likely to win the election. CDU is generally in high 30’s, with running up Social Democrats (SDP) at low 20%. The ex-Communist Left, Greens, Free Democrats (FDP) and right wing Alternative for Germany (AFD) are all between 7% and 11%. Should FDP and and CDU win a combined majority, it’s highly likely that they will form a coalition.

USDCNY continues to recover after the pair slumped to the lowest level since December 2015 last Friday. The rebound is long-awaited as the broad-based USD weakness has caused the pair to decline over the past 4 months. It is facilitated by PBOC’s announcement to remove the requirement for banks to hold the equivalent of 20% of clients’ FX forward positions as reserve for a year at 0% interest. For more than a decade, China has been implementing reforms in its currency, with the ultimate goal of achieving a floating exchange rate regime and convertibility for renminbi – a movement widely described as renminbi internationalization. However, the government has only been moving back and forth, without making significant progress in transforming renminbi into a market-oriented exchange rate. More in PBOC Removes Capital Control. Yet, Renminbi Internationalization Remains Distant

Australia NAB business condition rose to 15 in August up from 14, and hit the highest level since 2008. However, business confidence tumbled notably to 5, down from 12. It’s also the first time it dropped below its long-term average since mid-2016. NAB chief economist Alan Oster noted that "for those indicating deterioration in confidence, the biggest concerns appear to be customer demand, government policy, as well as cost pressures – both energy and wages." But, it’s "it is probably too early to read much into the drop in confidence this month." And, "household consumption is a notable point of difference between our relatively subdued growth outlook and the RBA’s more sanguine forecasts, and will be key to the economy’s sustained return to trend growth."

GBP/USD’s rally resumed quickly after brief consolidations. Break of 1.3267 resistance also confirms resumption of whole rise from 1.1946. Intraday bias is back on the upside for 1.3444 key resistance next. At this point, we’d maintain that price actions from 1.1946 are still seen as a corrective pattern. Hence, we’d expect strong resistance from 1.3444 to limit upside to bring larger down trend reversal eventually. On the downside below, 1.3158 minor support will turn intraday bias neutral again.

In the bigger picture, overall, price actions from 1.1946 medium term low are seen as a corrective pattern. While further rise cannot be ruled out, larger outlook remains bearish as long as 1.3444 key resistance holds. Down trend from 1.7190 (2014 high) is expected to resume later after the correction completes. And break of 1.2773 support will be the first sign that such down trend is resuming. 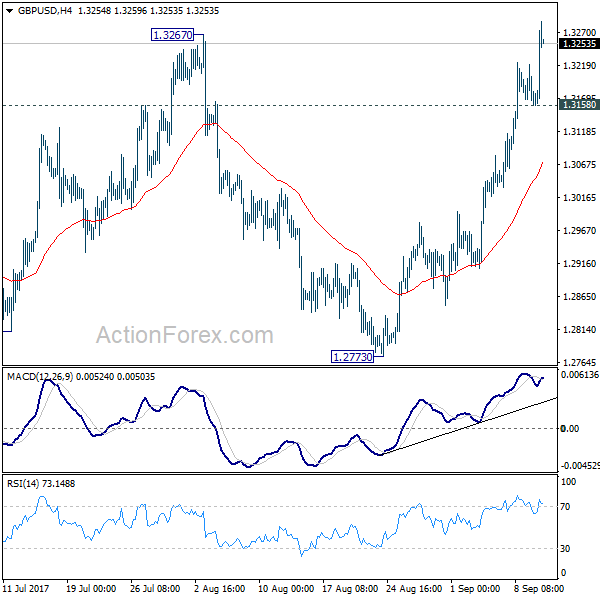 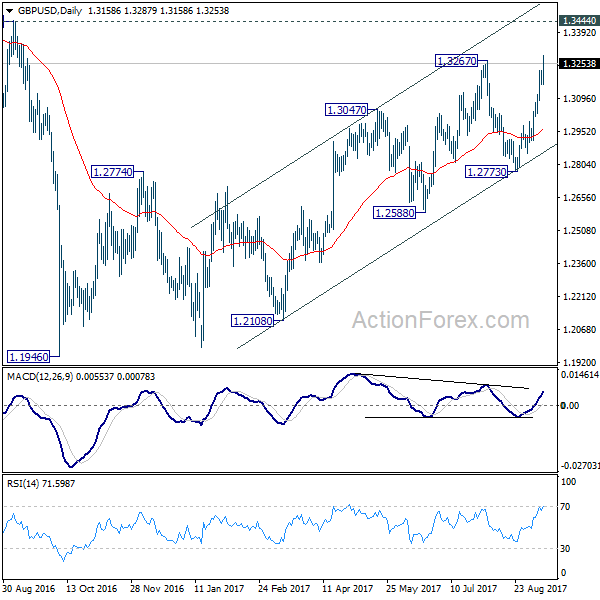