Russia’s invasion of Ukraine remain the dominant theme in the markets, and Euro and Sterling stay pressured as a result. Swiss Franc is the biggest winner for now on safe haven flow, but Aussie and Yen are also supported. On the other hand, Dollar is dragged down by the steep fall in treasury yield overnight. Canadian Dollar is mixed and BoC rate hike is unlikely to give it much boost. In other markets, WTI crude oil surged again and breached 110 handle. Gold is staying firm above 1900 for now, but still lacks follow through buying. Asian stocks are weak, following the selloff in US overnight. 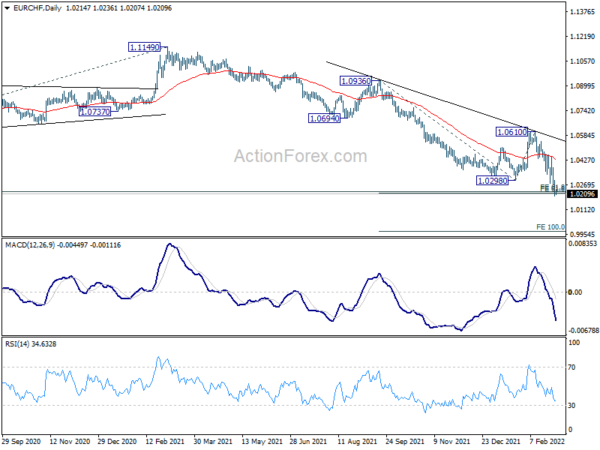 Oil price surged to highest level since 2014 on concern of supply disruptions related to Russia invasion of Ukraine. The International Energy Agency’s 31 member countries have just agreed to release 60 million barrels of oil from their strategic reserves. But that’s apparently not enough to calm the markets.

It’s still early to say. But is should be noted that fear driven moves in commodity markets could be extremely powerful. Just remember oil price was negative less than two years ago. So, decisive break of 115.32 could easily prompt more acceleration to 161.8% projection at 147.71, in rather quick manner. 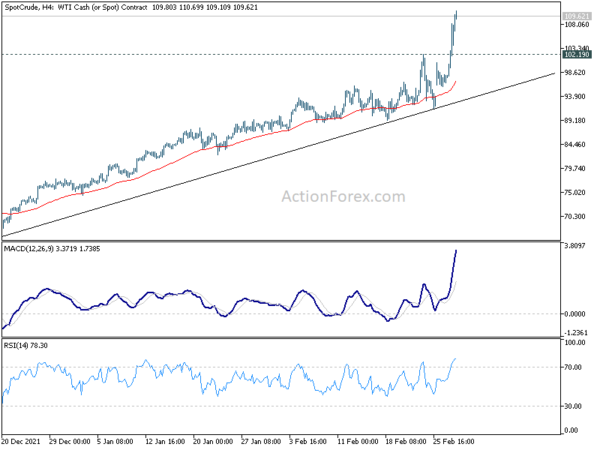 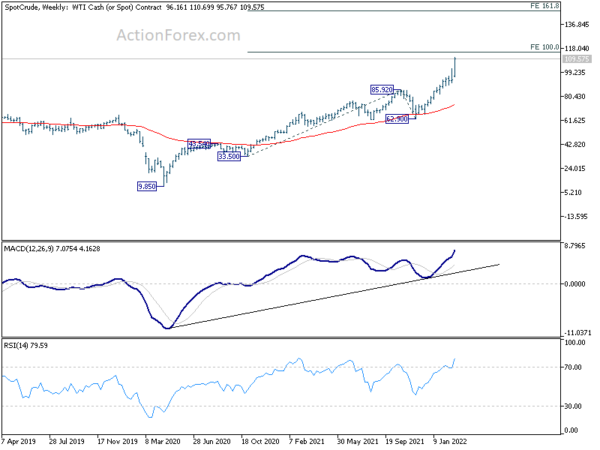 Cleveland Fed President Loretta Mester said yesterday that Russia’s invasion of Ukraine could push inflation up higher. “The unfolding event has implications for the economic outlook, adding upside risk to inflation even as it puts downside risks to the growth forecast,” she said.

“The challenge facing Fed policymakers is how to recalibrate monetary policy, reducing the accommodation from the emergency levels needed earlier in the pandemic in order now to get inflation under control and at the same time sustain the expansion and maintain healthy labor markets,” Mester added.

BoE Saunders prefers to move rates quite quickly towards neutral

BoE MPC member Michael Saunders said yesterday, “the economy is in significant excess demand, and inflation expectations are not as well anchored as I would like.”

“My preference is to move quite quickly towards a more neutral stance in order to prevent the recent trend of higher inflation expectations and rising pay growth from becoming more firmly embedded,” he said.

However, he emphasized that his vote for 50bps hike in February “does not necessarily imply that I would vote for a 50 basis-point hike in the event that further tightening is required.”

” All else equal, the case for policy to move in a larger step probably is greater when Bank Rate is clearly further away from the approximate level that, if maintained, would return inflation to target and keep it there,” he added.

BoE MPC member Catherine Mann said yesterday, “we already have very rapid increase in oil prices… In the U.K., that it becomes embedded by virtue of the institution mechanism of the price cap” on domestic energy bills.

“That embeddedness becomes a domestic inflationary problem that we have to deal with on the monetary policy stage,” she said.

SNB Vice Chairman Fritz Zurbruegg said in a l’agefi interview, “Switzerland has always had lower rates than others since the financial crisis. It is very important for us to keep this differential to avoid an excessive appreciation of the Swiss franc.”

“As soon as the situation requires it, we’ll raise our interest rate,” he said. But, “we’ll keep this ability to intervene in foreign exchange markets if needed to ensure price stability.”

“Experience has shown that having some leeway within the range we associate with price stability has worked well in the past in Switzerland,” he added. “We are a small, open economy with capital flows linked to our safe-haven status. We cannot always achieve a precise target and inflation can fluctuate in the short term because we aim for the medium term.”

Australia GDP grew 3.4% qoq in Q4, above expectation of 2.9% qoq. Real net national disposable income rose 1.7%. Terms of trade fell -5.1%. GDP in the December quarter 2021 was 3.4% above December 2019 pre-pandemic levels.  The emergence of the Omicron variant over the second half of December 2021 did not have a material impact on activity this quarter.

BoC to hike, EUR/CAD breaking to the downside

BoC is widely expected to raise interest rate by 25bps to 0.50% today to kick start the tightening cycle. The central bank might also announce the plan to shrink its balance sheet. Overall tone of the statement should remain hawkish, setting the stages for more rate hikes ahead. Some analysts are expecting the policy rate to hit 1.25% by the end of the year.

Some previews on BoC

Above 1.4303 minor resistance will delay the bearish case and bring some consolidations. But outlook will remain bearish as long as 1.4633 resistance holds. 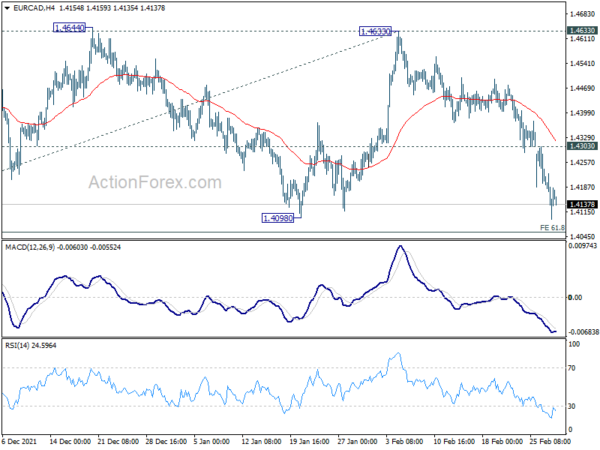 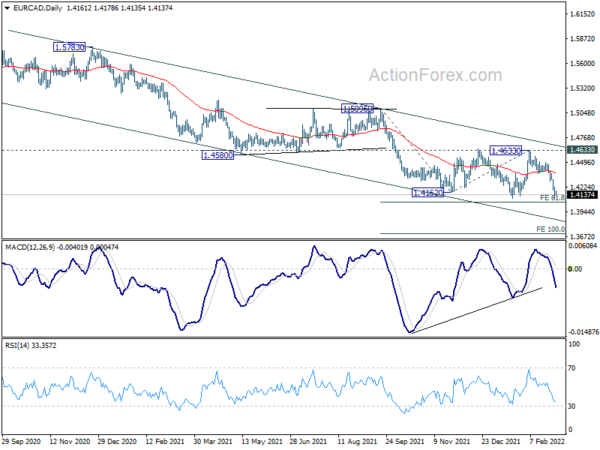 Germany unemployment and Eurozone CPI flash will be featured in European session. In addition to BoC rate decision, US will release ADP employment and Fed’s Beige Book report. 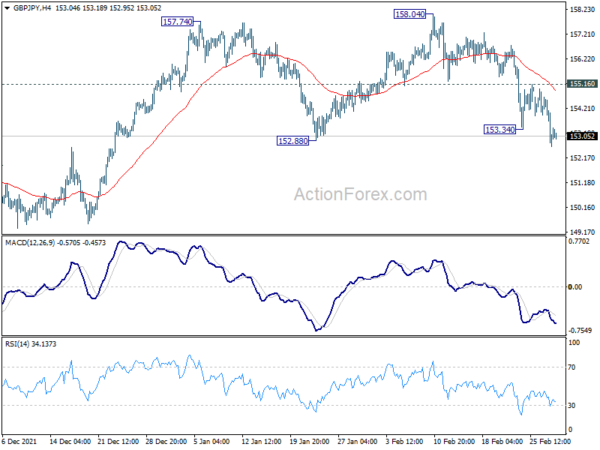 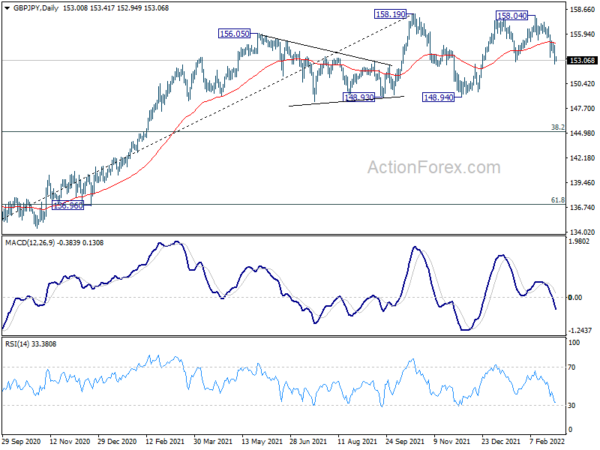