Yen’s selloff resumes in early US session as selloff in bonds resume. Dollar picks up some buying after strong job data. But Swiss Franc is stronger with help from selloff in Euro. On the other hand. commodity currencies are turning weaker together with Euro, but pressure on them is still far from that on Yen.

Technically, both EUR/CAD and EUR/AUD are now getting closer to near support levels of 1.3760 and 1.4561 respectively. Firm break of these levels will resume larger down trend. If that happens, we’ll see if EUR/USD would finally make up its mind to fall through 1.0899 minor support, or even 1.0805 low. 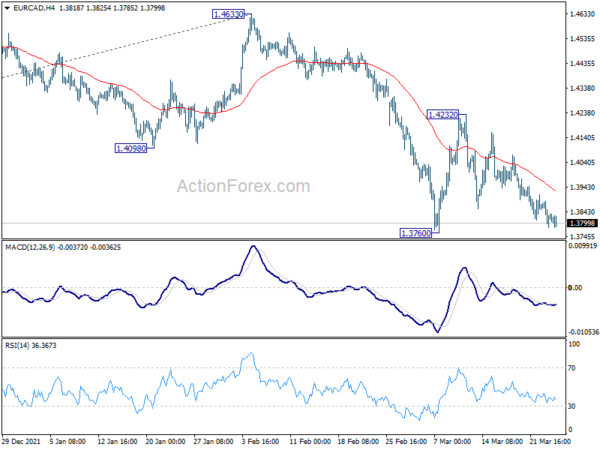 US initial jobless claims dropped to 187k, lowest since 1969

US initial jobless claims dropped -28k to 187k in the week ending March 19, much better than expectation of 210k. That’s also the lowest level since September 6, 1969, when it was 183k. Four-week moving average of initial claims dropped -12k to 212k.

SNB keeps sight deposit rate unchanged at -0.75% as widely expected. It reiterated that is is “willing to intervene in the foreign exchange market as necessary, in order to counter upward pressure on the Swiss franc”. The Swiss franc remains “highly valued”.

SNB said, “the war in Ukraine has had an effect on the Swiss economy above all via the strong increase in commodity prices”, and are likely to “weigh on consumption and increase companies’ production costs”. Trade is likely to be affected by “albeit not severely given Switzerland’s limited direct economic ties to Ukraine and Russia”. Supply bottlenecks “could deteriorate further” and uncertainty could have an “adverse impact on investment activity.”. 2022 growth forecasts was revised lower to around 2.5%.

Chris Williamson, Chief Business Economist at S&P Global said: “The survey indicators point to potentially sharply slower growth in the coming months, accompanied by a further acceleration of inflation and a worsening cost of living crisis, which paints an unwelcome picture of ‘stagflation’ for the economy in the months ahead.”

ECB Executive Board member Frank Elderson said in a speech that there are two channels through which Russia invasion of Ukraine weighs Eurozone outlook. They are “negative confidence effects, which have an impact on both international trade and on financial markets, and high energy prices.”

But he noted that outlook prevailing the invasion was “quite favorable”. And, “this implies that in our updated baseline outlook, and also in more adverse and severe scenarios for the impact of the war, stagnation is not foreseen.”

“It is a well-established practice in monetary policy that in times of uncertainty prudent policy calls for gradualism,” Elderson said. “This holds particularly true when we approach potential turning points in the monetary policy cycle.”

“If the evolution of the inflation outlook supported by incoming data allows a further normalisation of monetary policy, we stand ready to adjust our instruments accordingly.”

Chris Williamson, Chief Business Economic at S&P Global said: “The survey data underscore how the Russia-Ukraine war is having an immediate and material impact on the eurozone economy, and highlights the risk of the eurozone falling into decline in the second quarter…

“The war has aggravated existing pandemic-related price pressures and supply chain constraints, leading to record inflation rates for firms’ costs and selling prices, which will inevitably fee through to higher consumer prices in the months ahead…

“Businesses are themselves bracing for weaker economic growth, with expectations of future output collapsing in march as firms growth increasingly concerned about the impact of the war”.

BoJ board member Goushi Kataoka warned in a speech to business leaders, “disruptions in Russia-related trade will weigh not just on Russia’s economy but global growth by prolonging worldwide supply constraints.” And for the time being, “we must pay attention to downside risks to Japan’s economy…as well as upside risks to prices.”

Another member said, “many companies are feeling the limit of sticking to a business model that was effective deflation. As they change their price-setting behaviour, inflationary pressure may heighten.”

However, “nominal wage growth must exceed 2per cent for Japan to stably meet the BOJ’s price target,” on member was quoted.

Usamah Bhatti, Economist at S&P Global, said: “Flash PMI data indicated that activity at Japanese private sector businesses fell for the third month running during March. The decline in output eased from the previous survey period however, and was only marginal as companies noted that COVID-19 cases had continued to reduce, allowing the lifting of the quasi-state of emergency across Japan. By sector, manufacturers noted a renewed rise in output in at the end of the first quarter, while service providers indicated a softer deterioration in business activity.

“Higher employment levels in March had been a positive sign, though firms also widely reported higher wages. Meanwhile the reopening of the international borders led to the first new export business growth in the service sector since June 2021.”

In a report, IMF urged RBNZ to have “significant increases” in interest range in the near term to address inflation as a priority.

IMF said, “with the recovery well-entrenched, tight labor market conditions, and elevated inflation, it is appropriate to withdraw fiscal and monetary support as envisaged.”

Fiscal policy should “remain agile”. “While the scheduled tightening of fiscal policy is appropriate, the authorities should calibrate the fiscal stance to the evolution of the pandemic and economic conditions, providing additional, targeted support where needed.”

As for monetary policy, IMF said it should remain “data dependent, and continued, swift policy normalization will be appropriate under baseline conditions.”

“Given New Zealand’s strong cyclical position and inflationary pressures, significant increases in the Official Cash Rate in the near term are appropriate, signaling the RBNZ’s commitment to addressing inflation as a priority.”

USD/JPY’s rally continues today and hit target of 100% projection of 109.11 to 116.34 from 114.40 at 121.63. There no sign of topping yet. Intraday bias stays on the upside for the moment. Sustained trading above 121.63 will pave the way to 125.85 long term resistance. On the downside, below 120.58 minor support will turn intraday bias neutral and bring consolidations first, before staging another rally. 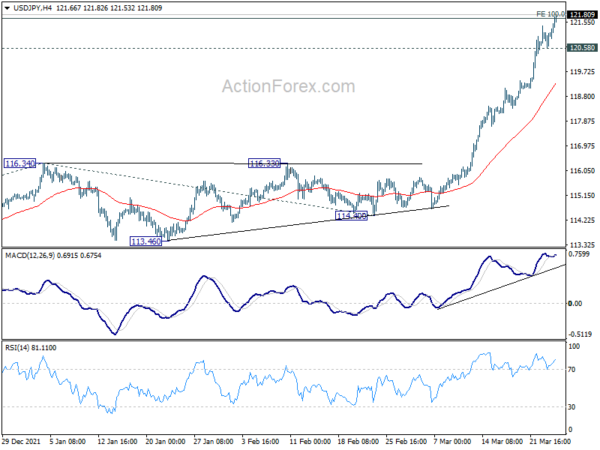 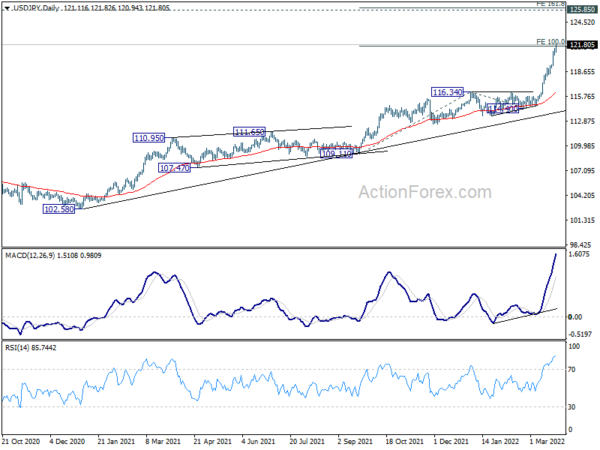