Risk aversion seems to back in indecisive markets today, with major European indexes and US futures trading down. Yen and Swiss Franc are trading mildly higher, followed by Dollar. Sterling and Canadian receive little support from strong consumer inflation reading. But Aussie and Kiwi are the worse performers while Euro is mixed. Focus will turn to Fed Chair Jerome Powell’s testimony.

Technically, Aussie bears seem to be making some progresses. EUR/AUD is now pressing 1.5277 resistance and break will put 1.5354 support turned resistance in focus. Sustained break there will be a sign of larger bullish reversal and could prompt further buying. At the same time, AUD/USD might extend lower to take on 0.6828 low. Firm break there will also resume larger down trend to 0.6756/60 cluster support. 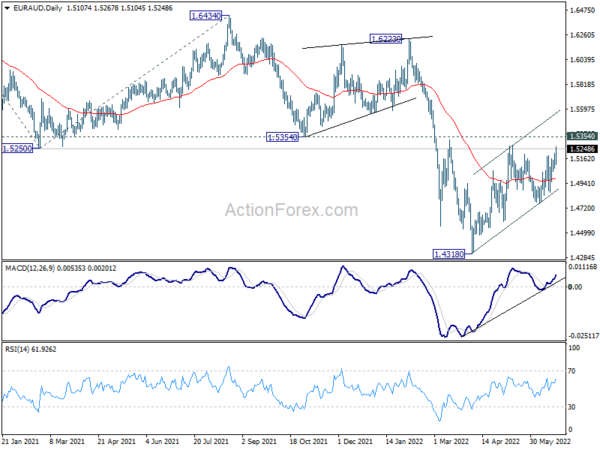 ECB Vice-President Luis de Guindos said today “fragmentation is a significant worry.” The central bank is ” speeding up process to ready a tool against fragmentation,” but the governing council has “still not discussed the details yet”.

But he emphasized, “fragmentation instruments should not interfere with the overall monetary policy approach, which should be focused on fighting inflation.” Also, the new tool should be different to previous PEPP, APP or OMT programs as “circumstances are not the same.

In the minutes of April 27-28 meeting of BoJ indicated that while the board was concerned with fluctuation in Yen’s exchanger rate, it remained firm on the stance to continue with ultra-loose monetary policy.

One board member noted that Japan’s economy was “still on its way to recovery”. As a “commodity importer”, the rise in commodity prices would “lead to an outflow of income from Japan and thus exert downward pressure on the economy.” Hence, it’s “necessary” to “continue with the current powerful monetary easing and thereby firmly support the economy.”

Another member noted that “the challenge of monetary policy in Japan was not to curb inflation, as in the case of the United States and Europe, but to overcome inflation that was still too low”. A different member commented that,” with the addition of Russia’s invasion of Ukraine to the existing downside risks to the economy, the situation had further changed significantly; against this backdrop, it was not appropriate for the Bank to make any big changes to its monetary policy stance.”

Regarding Yen’s depreciation, “a few members said excessive fluctuations in the foreign exchange market over a short period of time, such as those observed recently, would raise uncertainties about the future and make it more difficult for firms to formulate their business plans”.

Some member noted, “it was necessary for the Bank to clearly communicate to the public that the aim of monetary policy conduct was to fulfill its mandate of achieving price stability, rather than to control foreign exchange rates.”

Australia Westpac leading index dropped to 0.58 in May

Australia Westpac leading index dropped form 1.09% to 0.58% in May, still indicating above trend growth for 2022. Westpac said, “the components of the Index are indicating an important emerging theme around Australia’s growth prospects – a significant shock to consumer confidence.”

On RBA policy, Westpac expects the central bank to hike a further 50bps in July. It assessed that at 1.35% after the hike, interest rate is still below the neutral setting. Given the tight labor market and rising inflation, further monetary tightening can be expected through 2022.

Intraday bias in GBP/USD remains neutral and outlook is unchanged. Outlook stays bearish as long as 1.2666 resistance holds. On the downside, break of 1.1932 will resume larger down trend from 1.4248. However, firm break of 1.2666 will suggest medium term bottoming and bring stronger rebound back towards 1.3158 support turned resistance. 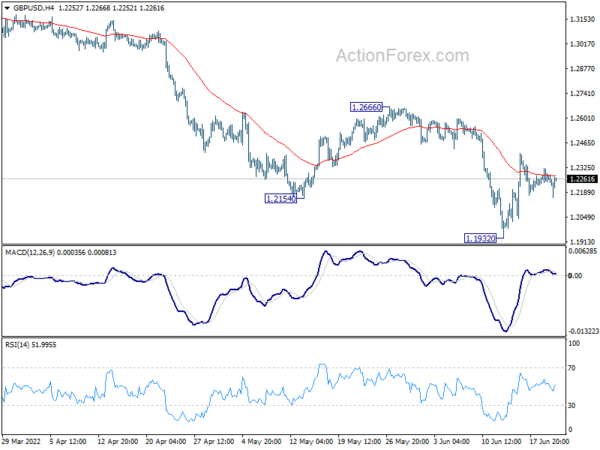 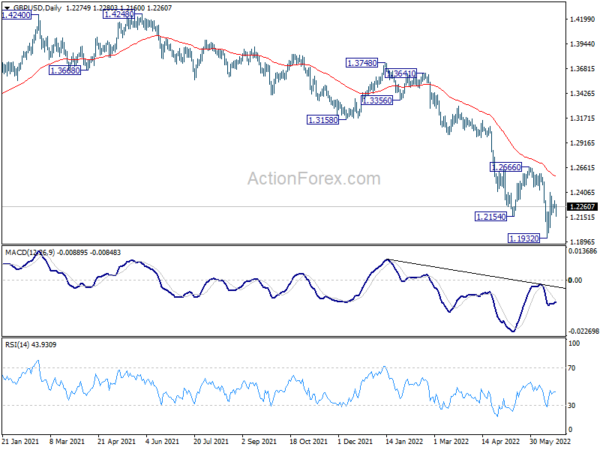