The stock markets are starting to display some resilience, despite hawkish FOMC minutes. US stocks managed to close higher after initial selloff. Nikkei is also showing some strength in Asian session. Dollar and Yen are retreating mildly while Aussie and Kiwi are trading higher. As for the week, Euro and Sterling remain the runaway loser, followed by Canadian. On the other hand, Aussie has overtaken the first place, followed by Dollar and then Yen.

Technically, as Aussie and Kiwi are displaying some resilience, focuses will be on AUD/USD and NZD/USD. Though, the more decisive moves could only come after tomorrow’s non-farm payrolls. Anyway, AUD/USD is still defending 0.6756/60 cluster support. Break of 0.6918 minor resistance will suggest short term bottoming and raise the chance of bullish reversal. Similarly, break of 0.6251 minor resistance in NZD/USD should also bring rebound to 0.6395 resistance and possibly above. 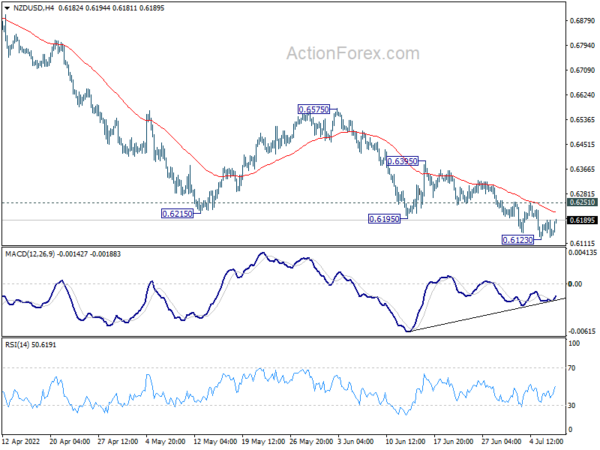 Fed minutes: As even more restrictive stance could be appropriate

In the minutes of the June 14–15 FOMC meeting, Fed noted, “participants concurred that the economic outlook warranted moving to a restrictive stance of policy, and they recognized the possibility that an even more restrictive stance could be appropriate if elevated inflation pressures were to persist.”

Also, “participants recognized that policy firming could slow the pace of economic growth for a time, but they saw the return of inflation to 2 percent as critical to achieving maximum employment on a sustained basis.”

“Many participants judged that a significant risk now facing the Committee was that elevated inflation could become entrenched if the public began to question the resolve of the Committee to adjust the stance of policy as warranted,” the minutes noted.

Innes Willox, Chief Executive Ai Group, said: “With interest rates rising for the first time in a decade, we have seen a ‘two-speed’ services sector emerge in June. Industries which are sensitive to sentiment changes – such as business & property, and personal & recreational services – declined into contraction. Less interest-rate-exposed services remained in a growth phase. With the RBA increasing rates by 50 basis points again this week, we would expect this two-speed pattern to gather pace.”

Intraday bias in AUD/USD is staying neutral at this point. Strong support could still be seen from 0.6756/60 cluster support to complete the whole correction from 0.8006, and bring rebound. On the upside, above 0.6918 resistance will indicate short term bottoming, and turn bias back to the upside for 0.7282 resistance. However, sustained break of 0.6756/60 will carry larger bearish implication and target 0.6461 fibonacci level next. 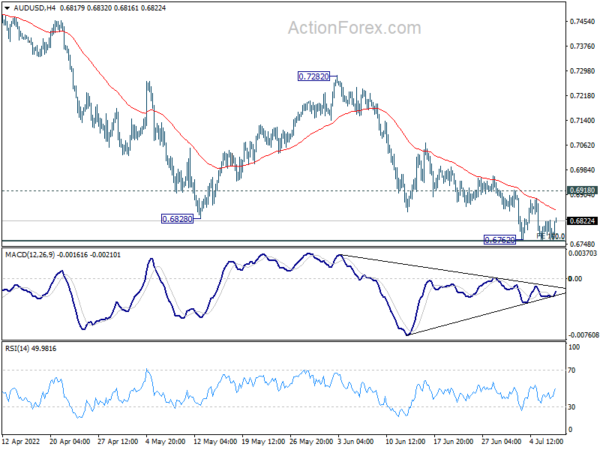 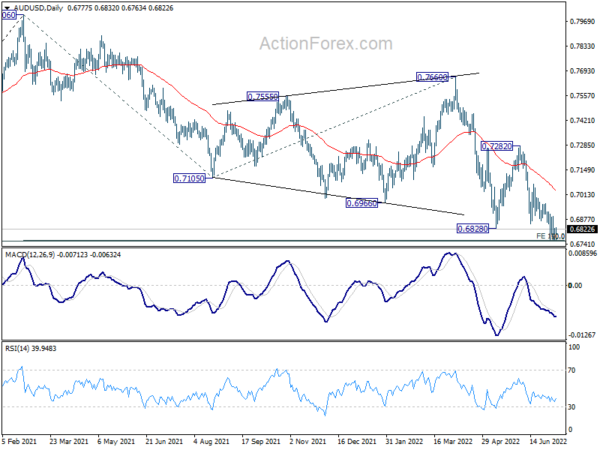