European majors, including the Swiss Franc, are under much selling pressure currently. EUR/USD dived through parity, and hit a new low. The development came on worries that Russia will further weaponize its natural gas supplies to Europe, adding further weight to the already troubled economy. Dollar is strong as supported by rising treasury yield, with 10-year yield back above 3% handle. But Aussie and Kiwi are so far also resilient. Yen is mixed with counter forces of risk-aversion and rising yields.

Technically, a focus for the week is US 10-year yield’s reaction to 3.101 resistance, as reaction to Jackson Hole symposium too. Firm break there could prompt some upside acceleration towards 3.483 high before the end of the quarter. Such development, if happens, could also come with deeper selloff in stocks, and give support to the greenback. Anyway, a roller coaster is probably awaiting in September. 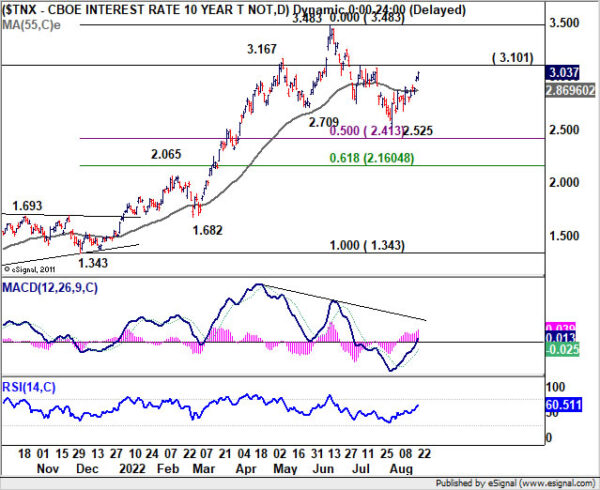 Japan PMI manufacturing dropped to 51 in Aug, services down to 49.2

Usamah Bhatti, Economist at S&P Global Market Intelligence, said: “The latest Flash PMI data showed that Japanese private sector activity declined for the first time since February midway through the third quarter. Both manufacturing and services companies recorded a contraction in output in August, with the former falling at the fastest pace for 11 months.

“August data signalled the second-weakest reading in the composite index so far this year, though the rate of deterioration was only mild. Of concern was the amount of new business received by private sector firms, which reduced for the first time in six months and pointed to further weaknesses to come.”

Laura Denman, Economist at S&P Global Market Intelligence said: “A renewed contraction in Australia’s private sector economy indicates that recent interest rate hikes made by the RBA, as well as sustained inflationary pressures, have begun to take a toll on overall demand levels.

“Should new order growth remain subdued, this may help reduce demand-pull inflation factors, but survey data continue to highlight the supply issues that remain prevalent globally, which will continue to keep price levels elevated for the foreseeable.

“As such, the RBA will likely continue along its rate-hiking path, which bodes ill for the wider economy given the latest survey data highlight clear signs of underlying weakness.”

Following broad-based selloff in Euro, EUR/CAD finally broke out of range this week and it’s now resuming long term down trend. Outlook is clearly bearish with the cross staying well inside falling channel, with recovered capped by falling 55 day EMA. 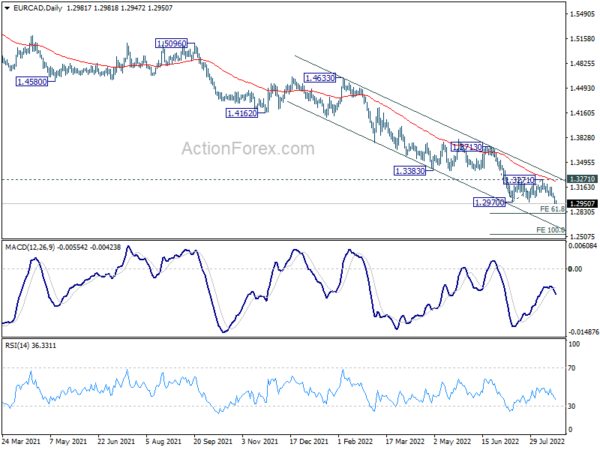 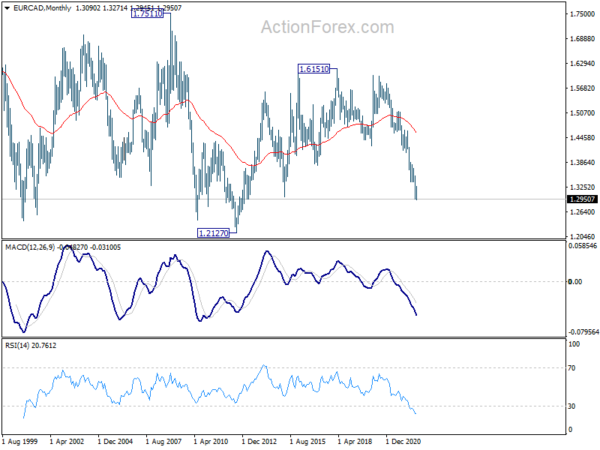 PMI data from Eurozone, the UK, and the US are the main features for today. US will also release new home sales.

EUR/USD’s break of 0.9951 support confirms down trend resumption. Intraday bias stays on the downside for 61.8% projection of 1.0773 to 0.9951 from 1.0368 at 0.9860. Firm break there should prompt downside acceleration to 100% projection at 0.9546. On the upside, above 1.0045 minor resistance will turn intraday bias neutral and bring consolidations. But recovery should be limited well below 1.0368 resistance to bring fall resumption. 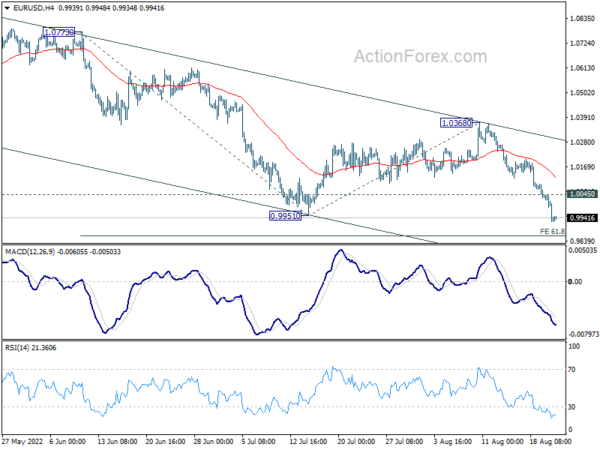 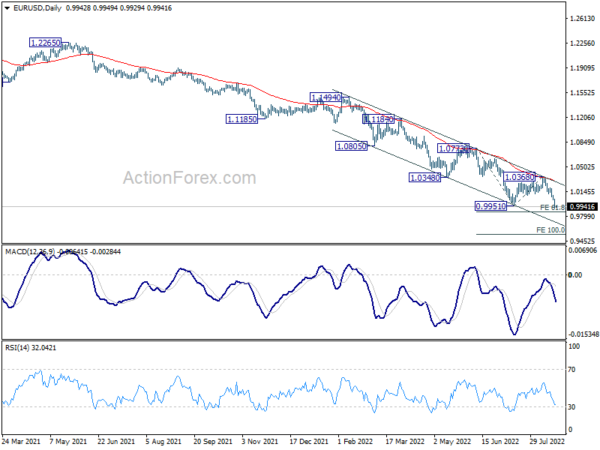