Canadian Dollar is steady in early US session after BoC delivered 75bps rate hike and maintained hawkish bias. Dollar remains the strongest one for the week, but continues to pick up momentum against Euro. Yen is still the runaway loser, while selloff in Sterling is intensifying. Aussie and Kiwi are clearly weighed down by risk-off sentiment for now.

Technically, GBP/CHF’s down trend resumed after brief recovery and breaks through 1.1244 temporary low. Next target is 1.1107 (2020 low). Some support might be seen there to bring rebound on first attempt. But that would depends on GBP/USD’s reaction to 1.1409 (2020 low too). 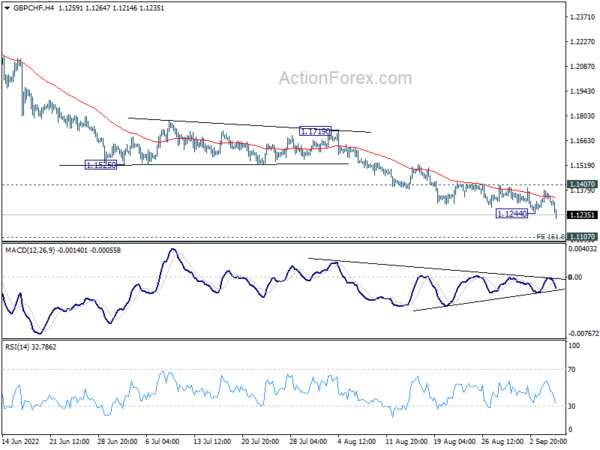 BoC raises the overnight rate target by 75bps to 3.25%. Correspondingly, the Bank Rate and deposit rate are now at 3.50% and 3.25% respectively. Hawkish bias is maintained as the Governing Council “still judges that the policy interest rate will need to rise further.”

“As the effects of tighter monetary policy work through the economy, we will be assessing how much higher interest rates need to go to return inflation to target,” BoC added.

BoC also noted that core inflation “continued to move up” with data indicating a “further broadening of price pressures, particularly in services”. It warned, “the longer this continues, the greater the risk that elevated inflation becomes entrenched.”

The economy “continues to operate in excess demand and labour markets remain tight”. BoC expects the economy to “moderate in the second half of this year,  as global demand weakens and tighter monetary policy here in Canada begins to bring demand more in line with supply.”

Trade surplus narrowed from CAD 4.9B to CAD 4.1B, larger than expectation of CAD 3.8B.

US trade deficit narrowed to USD 70.6B in Jul

BoE Chief Economist Huw Pill said plans by new Prime Minister Liz Truss on energy costs could help slowing inflation. He told the Parliament’s Treasury Committee today, “one of the things that does seem to be under consideration … is a change to the relationship between gas prices and retail gas prices in a direction that will lower headline inflation, relative to what we were forecasting,”

Governor Andrew Bailey said, “It’s not for us to comment on what fiscal policy will be and we will wait and see what it is … but I do very much welcome the fact that there will be, as I understand it, announcements this week because I think that will help to, in a sense, frame policy and that’s important.”

MPC member Silvana Tenreyr favors a more tentative approach on tightening. She said, “When close to the equilibrium rate, gradual rate rises allow us to react before we tighten too far into contractionary territory, as we observe the lagged impact of policy and demand on the labor market. They also do not preclude voting for more forceful rate increases in future, should adverse wage-price dynamics take hold.”

On the other hand Catherine Mann reiterated her stance that “a more forceful set of moves in Bank Rate earlier on opens the potential for a policy hold, or even reversal, later depending on the evolution of both inflation and demand relative to supply.”

As Yen tumbles further to fresh 24-year low against Dollar, Japan Finance Minister Shunichi Suzuki  cautioned that “recent moves are rather rapid and one-sided . We need to be watching developments with strong interest.”

Chief Cabinet Secretary Hirokazu Matsun said at a news briefing, “I’m concerned about rapid, one-sided moves in the currency market recently. If such moves continue, we will take necessary action.”

Sean Crick, head of National Accounts at the ABS, said: “Rises in household spending and exports drove growth in the June quarter. This is the third consecutive quarter of economic growth, following a contraction in the September quarter 2021, which was impacted by the Delta outbreak.”

Innes Willox, Chief Executive of Ai Group, said: “Services remained in expansion in August, pointing to the overall resilience of the sector with sales, employment and new orders all higher than in July…. Price and wages pressures continued into August although the pace of increase in input prices eased somewhat. With service businesses highlighting interest rates as a key area of concern, the Reserve Bank’s decision yesterday to raise the cash rate by another 50 basis points to 2.35% will further fuel their fears of a fall in spending in the months ahead.” 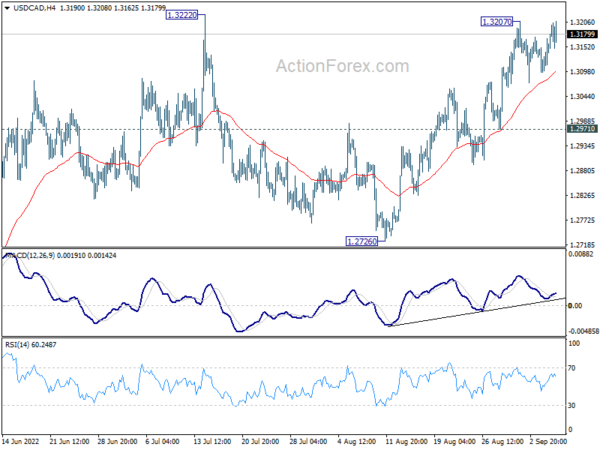 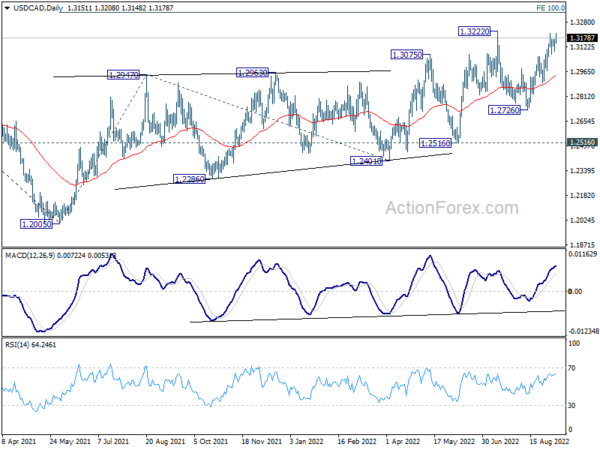