USD Jumps on Rising Yields and Risk Aversion, CAD Down after CPI Miss

Canadian Dollar falls broadly in early US session after weaker than expected inflation reading. Yet, it’s still undecided on which currency is worst. Dollar is current in the driving seat, as lifted by extended rally in treasury yield. 10-year yield is trading up above 3.5 handle for the first time in more than a decade. Swiss Franc and Yen are steady on risk aversion. But Sterling is more resilient with help from buying against Euro.

Technically, immediate focus in on 1.3343 temporary top in USD/CAD. Firm break there will resume larger up trend to medium term fibonacci level at 1.3650. That would be a leading signal of more rally in Dollar elsewhere. 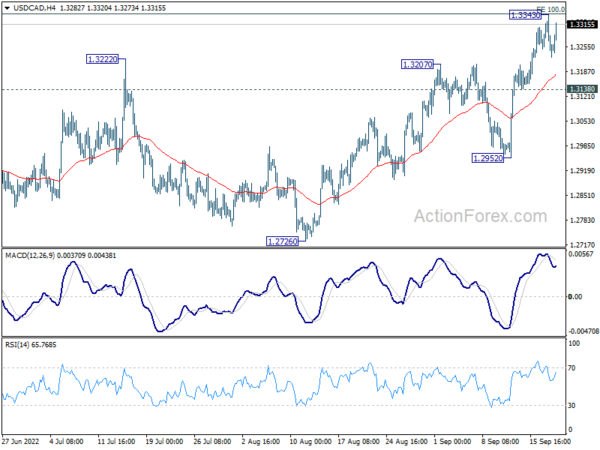 Canada CPI dropped -0.3% mom in August, below expectation of -0.1% mom. That’s the largest monthly decline since early months of the pandemic.

For the 12-month period, CPI slowed from 7.6% yoy to 7.0% yoy, below expectation of 7.3% yoy. That’s also the second consecutive slowdown in the year-over-year rate, largely driven by lower gasoline prices. CPI excluding gasoline slowed from 6.6% yoy to 6.3% yoy, first deceleration since June 2021.

It said, “after a positive first half of the year 2022, the Swiss economy now faces a deteriorating outlook. A tense energy situation and sharp price increases are weighing on economic prospects, especially in Europe.”

It also warned of risks from “serious gas or electricity shortages” in Europe, and “large-scale production stoppages and a marked downturn”. Such a negative scenario would likely lead to “high domestic price pressures” and “downward trend in the economy economy. With rising interest rates, ” risks associated with the surge in global debt are intensifying.

BoJ is widely expected to continue to stand pat, and maintain negative interest rate later this week. But there are expectations that core inflation could hit 3% later in the year, and stay above the 2% target in the near term. That might start to change BoJ’s view on prices and policy at a later stage.

Minutes of RBA’s September 6 meeting revealed that there were discussions on whether to hike by 25bps or 50bps. But, “given the importance of returning inflation to target, the potential damage to the economy from persistent high inflation and the still relatively low level of the cash rate, the Board decided to increase the cash rate by a further 50 basis points.”

RBA reiterated that there will be further interest rate hikes “over the months ahead”, but it’s it “not on a pre-set path”. The full effects of higher interest rates were “yet to be felt” on mortgages, activity and inflation.

The board was “mindful” that the path to bring inflation back to target “needed to account for the risks to growth and employment. RBA is seeking to return inflation to target “while keeping the economy on an even keel”.

Size of timing of future rate hikes will be “guided by the incoming data” and outlook for inflation and job market, and risks. “All else equal, members saw the case for a slower pace of increase in interest rates as becoming stronger as the level of the cash rate rises”.

No change in USD/CHF’s outlook and intraday bias stays mildly on the upside. Rise from 0.9478 would target 0.9868 resistance. Break there will argue that larger up trend is ready to resume through 1.0063. Overall, the corrective pattern from 1.0063 high could still extend. Below 0.9554 minor support will turn bias back to the downside for 0.9478 and below. 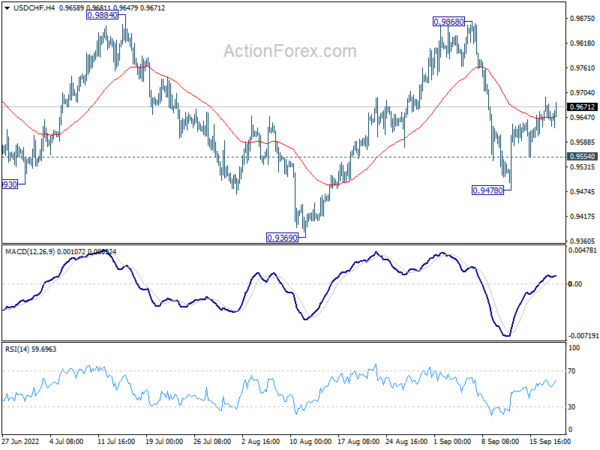 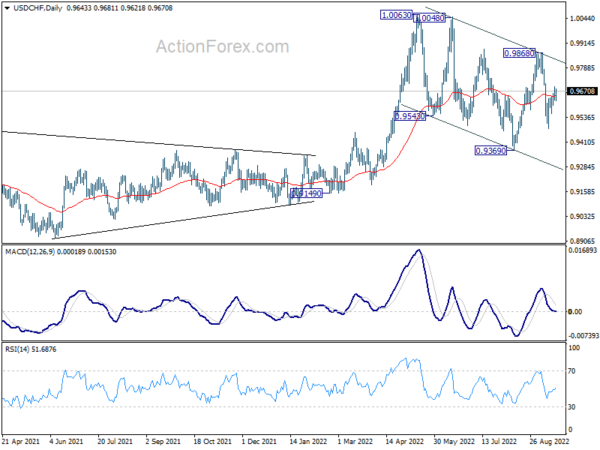