The forex markets are generally in consolidation mode today. Risk sentiment is slightly on the off side, but there is no serious selloff in stocks. Treasury yields in US, Germany and UK are trading mildly higher, giving Yen a little pressure. But commodity currencies are the weaker ones. On the other hand, Dollar is firmer together with Euro and Sterling.

Technically, Sterling is trying to extend recovery again today, but upside is so far very limited. Some attention will be on 1.0794 minor resistance in GBP/CHF. Break there would extend the rebound from 1.0183 towards 1.1146 key near term resistance. If happens, that could be an early signal for stronger rise in the Pound against Euro and Yen, and possibly Dollar too. 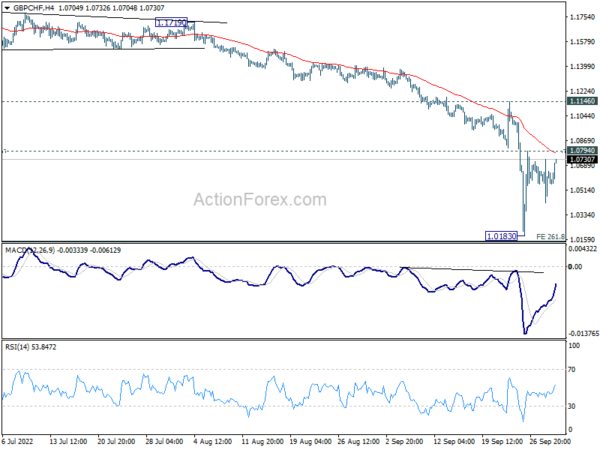 Advance information indicates that real GDP was essentially unchanged in August. Increases in retail and wholesale trade, as well as in agriculture, forestry, fishing, and hunting were offset by decreases in manufacturing and oil and gas extraction.

BoE Governor Deputy Governor Dave Ramdsen reiterated in a speech that the target gilt purchases announced this week, after severe repricing of assets, are “strictly time limited until 14 October”.

“They are intended to tackle a specific problem in the long-dated government bond market,” he added. “The purchases will be unwound in a smooth and orderly fashion once risks to market functioning are judged to have subsided.

ECB Simkus: My choice is 75bps for next hike

ECB Governing Council member Gediminas Simkus said he choice for the next rate hike is 75, adding that “a couple of options may be on the table but 50 is the minimum.” He indicated that ECB should target “as soon as possible” on reducing its balance sheet.

At the same event another Governing Council member Madis Muller said “inflation calls for significant rate hikes,” but it’s “too early to say how much in basis points.”

Also Governing Count member Mario Council said, “Right now frontloading other debates may in my opinion have a destabilizing effect that we really need to avoid. We have a path towards normalization of monetary policy and that’s the focus right now.”

In its first monthly release, Australia CPI rose 6.8% yoy in June, accelerated to 7.0% yoy in July, and slowed to 6.8% yoy in August

Monthly CPI excluding fruit, vegetables and fuel rose 5.5% yoy in June, accelerated to 6.1% yoy in July, then 6.2% yoy in August.

ANZ said: “It’s fair to say that demand has not yet rolled over as feared as the Reserve Bank has raised interest rates. But insofar as the RBNZ can just keep on going until they see the cooling in demand they need to tame inflation, that’s likely to be a temporary reprieve, if not an outright double-edged sword for firms that have considerable debt.”

“Inflation pressures are easing, but painfully slowly. It’s not enough for the RBNZ to see inflation pressures top out and ever so gradually fall. They will be concerned about the chance that wage and price-setting behaviour will change in structural ways that make bringing inflation down more difficult. We expect that the RBNZ will need to deliver a policy rate closer to 5% than 4% to get on top of inflation pressures.”

Intraday bias in GBP/USD stays neutral for the moment, as recovery from 1.0351 is extending. While stronger recovery cannot be ruled out, upside should be limited by 4 hour 55 EMA (now at 1.1017). On the downside, break of 1.0351 will resume larger down trend towards parity next. Nevertheless, sustained trading above 4 hour 55 EMA will bring stronger rebound towards 1.1404 support turned resistance. 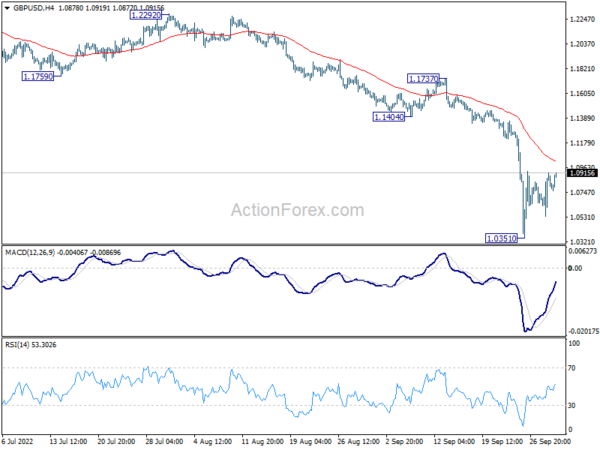 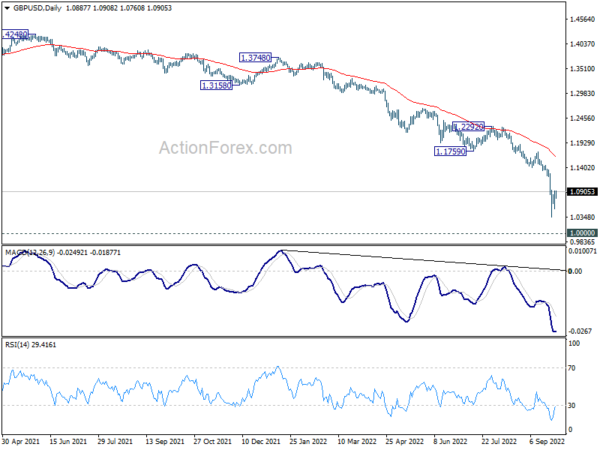