Sterling weakens sharply today as pressured by weaker than expected manufacturing data. Indeed, the Pound performs even worse than Euro, which is troubled by the political tensions in Spain. And, in spite of the early selloff, EUR/USD is holding above last week’s low at 1.1716 and no follow through selling is seen yet. Meanwhile, commodity currencies are trading broadly higher, recovering part of last week’s loss. In other markets, gold extends recent fall and dips to as low as 1273.7 so far. WTI crude oil also declines sharply and breaches 50.5, comparing to last week’s high at 52.86.

Despite government’s violent intervention, Catalonia’s referendum took place and resulted in an overwhelmingly "yes" to seceding the region from the rest of Spain. Peripheral European markets’ reactions are rather negative to the outcome. Spanish equities fell with the benchmark IBEX index losing over -1% in the morning session. Treasuries fell, sending yields higher. The 10-year Spanish government bond yields soared to a 2.5-month high of 1.68%. Spread between Spanish-German 10 yields rose to the highest in 3 weeks. Last Friday, S&P affirmed Spain’s sovereign credit rating at BBB+/A-2 with a positive outlook. Despite optimism over the economic outlook, the rating agency warned of the current tensions between the central government and the regional government of Catalonia. It suggested that rating outlook would be revised to "stable from "positive" if the tensions "escalated and started weighing on business confidence and investment, leading to less predictable future policy responses". More in Government Misstep Exacerbates Political Instability in Spain.

UK PMI manufacturing dropped to 55.9 in September, down from 56.7, missed expectation of 56.2. Markit noted that "the growth slowdown in September is a further sign that momentum is being lost across the broader UK economy." And, "on balance, the continued solid progress of manufacturing and export growth is unlikely to offset concerns about a wider economic slowdown, but the upward march of price pressures will add to expectations that the Bank of England may soon decide that the inflation outlook warrants a rate hike."

In China, PBoC announced targeted cuts to the reserve requirement ratio (RRR) ranging from 0.5% to 1.5%. The moves should apply to the majority of banks (90% of city commercial banks, and 95% of rural commercial lenders) in order to spur lending to small firms. This is the first reduction in RRR since February 2016. An RRR cut is regarded as an accommodative monetary policy in nature and the PBoC’s move is estimated to release around RMB300-400B to the market. But the central bank claimed that it has not derailed from the prudent and neutral policy stance.

Intraday bias in GBP/USD remains on the downside for the moment as fall from. Deeper decline would be seen to 61.8% retracement of 1.2773 to 1.3651 at 1.3108. On the upside, break of 1.3454 minor resistance is needed to signal completion of the decline. Otherwise, near term outlook remains mildly bearish in case of recovery. 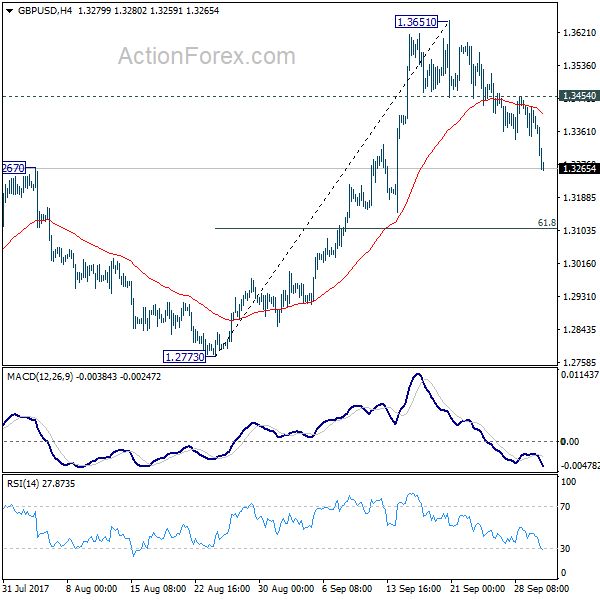 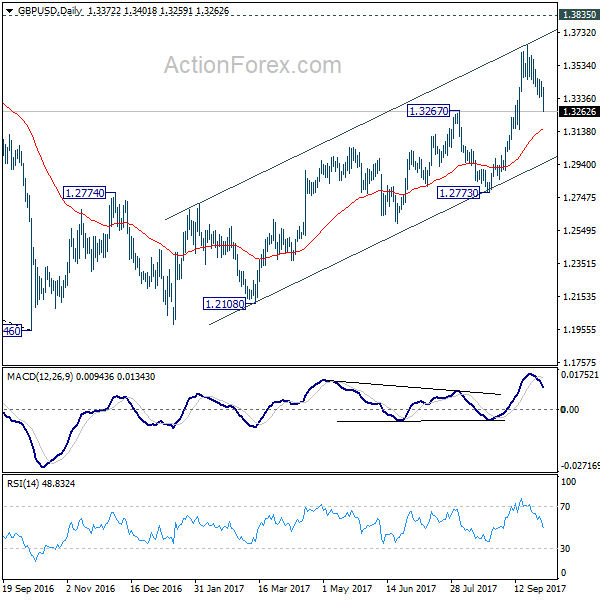