Technically, Euro is making progresses in some crosses with EUR/JPY breaking through 145.33 temporary top. EUR/AUD is on the verge of breaking 1.5747 resistance. EUR/CAD is also extending near term rally. A question now is when EUR/GBP would break through 0.8674 minor resistance to confirm short term bottoming at 0.8545. Euro’s strength in crosses will keep EUR/USD in range. 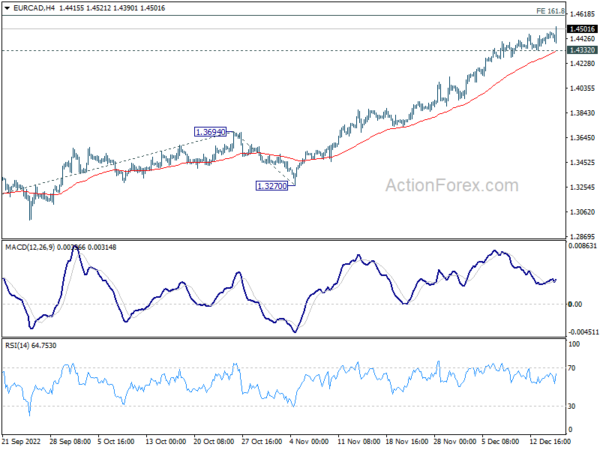 ECB raises the three key interest rates by 50bps today as expected. The main refinancing, marginal lending, and deposit rates are 2.50%, 2.75% and 2.00% respectively. The Governing Council expects to “raise them further” based on “substantial upward revision to the inflation outlook”.

Also ECB noted that “keeping interest rates at restrictive levels will over time reduce inflation by dampening demand and will also guard against the risk of a persistent upward shift in inflation expectations.” Future policy decisions will continue to be “data-dependent”, following a “meeting-by-meeting approach”.

BoE raises Bank Rate by 50bps to 3.50% as expected, by 6-3 vote. Two members, Swati Dhingra and Silvana Tenreyro voted for no change. On the other hand, Catherine Mann voted for 75bps hike.

The “majority” of the MPC judged that “should the economy evolve broadly in line with the November Monetary Policy Report projections, further increases in Bank Rate may be required”.

It’s also reiterated that “The Committee continues to judge that, if the outlook suggests more persistent inflationary pressures, it will respond forcefully, as necessary.”

SNB raises the policy rate by 50bps to 1.00% as widely expected, to “countering increased inflation pressure and a further spread of inflation”. The central added that additional rate hikes “cannot be ruled out”. It also maintained the willingness to be “active in the foreign exchange markets as necessary”.

The highest inflation forecasts was “attributable to stronger inflationary pressure from abroad and the fact that price increases are spreading across the various categories of goods and services in the consumer price index.”

Regarding GDP growth, SNB expects its to be at around 2.0% this year. But weaker overseas demand and higher energy prices are likely to “curb economic activity marked in the coming year”. SNB expects GDP growth to slow to 0.5% in 2023.

SNB Jordan: We will continue to sell foreign currency if appropriate

In the post meeting press conference, SNB Chairman Thomas Jordan said that this year’s 4% appreciation in Swiss Franc exchange rate “has helped ensure that less inflation has been imported from abroad, thus curbing the rise in inflation.”

Bjorn Jarvis, head of labour statistics at the ABS, said: “The participation rate increased by 0.2 percentage points to 66.8 per cent in November, returning to the record high we saw in June 2022. It was 1.0 percentage point higher than before the pandemic.”

“The record high participation rate continues to show that it is a tight labour market, especially when coupled with very low unemployment.”

Trade deficit came in at JPY -2.03T. That the 16th straight month of trade deficit, and the fourth month in a row at the JPY 2T level.

“The consumption market was under pressure in November due to the impact of Covid and other factors, and the decline in market sales widened,” said NBS statistician Fu Jiaqi.

EUR/JPY’s rebound from 140.75 resumed after brief retreat and intraday bias is back on the upside. Outlook is unchanged that correction from 148.38 could have completed at 140.75. Break of 146.12 resistance will target a retest on 148.38 high. For now, further rise will remain in favor as long as 143.48 support holds, in case of retreat. 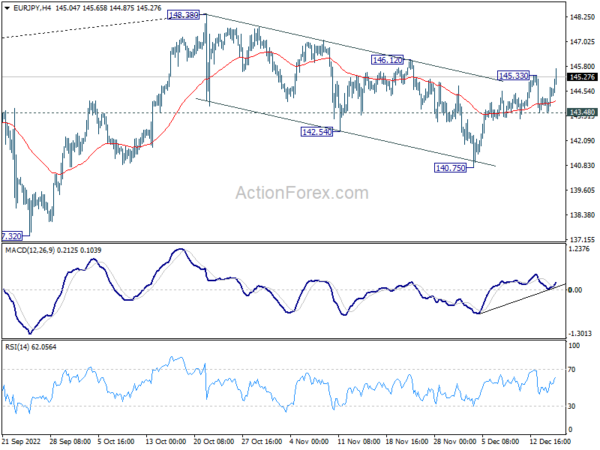 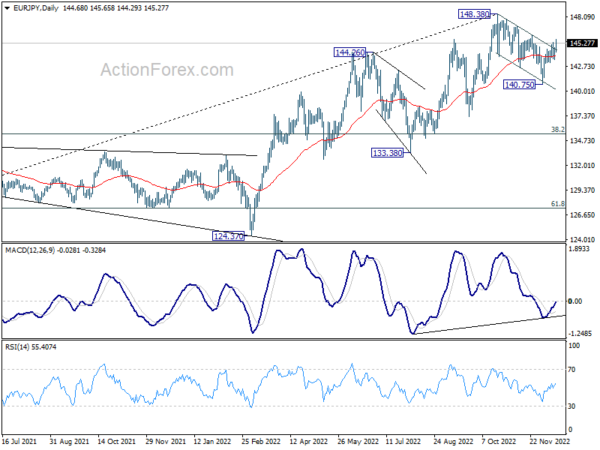