Sterling jumps sharply after BoE left monetary policies unchanged as widely expected. That is, benchmark interest rate was kept at 0.25%, asset purchase target was kept at GBP 435b. Most importantly, the decision for interest rate was not unanimous. Kristin Forbes voted for a 25bps hike. That’s seen by the markets as sign of a split in the MPC with some policymakers getting more intolerant to the surge in inflation. As noted in the minutes, "some members noted that it would take relatively little further upside news on the prospects of activity or inflation for them to consider that a more immediate reduction in policy support might be warranted." On the other hand, the majority stayed cautious on inflation outlook as wage growth has been "notably softer than expected, despite a further fall in the unemployment rate". Also, "estimates of retail sales had weakened notably" and that other indicators were "mixed".

SNB kept monetary policies unchanged as widely expected. Site deposit rate was held at -0.75%. Libor target range was kept at -1.25% to -0.25% too. The central bank noted in the statement that "a more extensive analysis of the available economic indicators points to an ongoing moderate recovery in the final months of the year; developments on the labour market support this view." Meanwhile, "compared to December, the new conditional inflation forecast is slightly higher for the next few quarters. Increased oil prices in particular contribute to the rise in inflation in the short term." SNB raised inflation forecast for 2017 to 0.3%, up from 0.1%.

On the other hand, it also pointed out that considerable risks remain for the global economy. And, "chief among these are political uncertainty with respect to the future course of economic policy in the US, upcoming elections in Europe, and the complex exit negotiations between the UK and the EU." SNB also reiterated that the Swiss Franc’s exchange rate is "significantly overvalued" and kept itself open to intervention.

Dollar stays as the weakest for the week

Dollar pares back some of post FOMC loss today but stays as the weakest major currency for the week. Released from US, housing start rose to 1.29m annualized rate in February. Building permits dropped to 1.21m. Initial jobless claims dropped 2k to 241k in the week ended March 11, better than expectation of 245k. Continuing claims dropped 30k to 2.03m in the week ended March 4. Philly Fed survey dropped to 32.8 in March, but beat expectation of 25.0. From Canada, international securities transactions dropped to CAD 6.2b in January.

Euro is somewhat supported by the result of Dutch election. The election is seen by many as the first test on populism in Europe. Conservative prime minister Mark Rutte claimed victory and said that "this night is a night for the Netherlands — after Brexit, after the American elections — where we said stop it, stop it to the wrong kind of populism." The turnout rate for the election was 81%, highest in three decades. Rutte’s Party for Freedom and Democracy is projected to win 33 seats out of 150 total. That’s significantly higher than 20 seats of far rightist Geert Wilder’s Freedom Party. Released from Eurozone, CPI was finalized at 0.4% mom, 2.8% yoy in February. Core CPI was finalized at 0.9% yoy.

BoJ on hold as widely expected

BoJ left monetary policies unchanged today as widely expected. Policy makers voted 7-2 to keep the Yield Curve Control unchanged. Short term policy rate is held at -0.1%. And BoJ will continue asset purchase at JPY 80T per annum. T. Sato and . T. Kiuchi voted against the decision. Regarding the economy, BoJ noted that it has "continued its moderate recovery trend", "exports have picked up". BoJ is optimistic that "Japan’s economy is likely to turn to a moderate expansion." Risks to outlook include development in US and Fed’s rate hikes, emerging economies, the consequences of Brexit.

BoJ governor said at the post meeting press conference that "the momentum for inflation to accelerate to 2 percent remains in place but lacks strength." And he pledged that BoJ will "continue to promote powerful monetary easing under the yield curve control framework to achieve its price target at the earliest date possible."

Both Aussie and Kiwi pare some gains against Dollar after weak economic data. The Australian economy lost -6.4k jobs in February, much worse than expectation of 16.3k growth. Unemployment rate jumped 0.2% to 5.9%, above expectation of 5.7%. That’s also the highest rate in more than a year. Contraction in job markets was led by -33.5k loss in part-time jobs. The 27.1k rise in full-time jobs couldn’t make up the number. Some economists noted that there is basically no inflationary pressure from the labor market and wage growth. Meanwhile, further surge in unemployment rate could pressure the RBA for a rate cut despite facing bubbling in the housing markets. Also from Australia, consumer inflation expectation dropped to 4.0% in March.

New Zealand GDP rose only 0.4% qoq in Q4, slowed from prior quarter’s downwardly revised 0.8 qoq. It also missed expectation of 0.7% qoq. The earthquake near Kaikoura back in November is seen as a factor skewing the data. But StatsNZ didn’t directly mention any disruption to activity due to that earthquake. Meanwhile, weakness in manufacturing, which contracted by -1.6%, has trimmed -0.2% from GDP growth. For 2016 growth averaged 3.1%, which was an improvement over 2.5% in 2016. That’s also the second straight year of above 3% growth.

GBP/USD’s rebound from 1.2108 extends higher today. The break of 1.2346 resistance argues that fall from 1.2705 is completed. And, the consolidation pattern from 1.1946 is extending with another rising leg. Intraday bias is turned back to the upside for 1.2569 resistance first. Break will target 1.2705/2774 resistance zone next. On the downside, below 1.2240 minor support will turn bias back to the downside for 1.2108 instead. 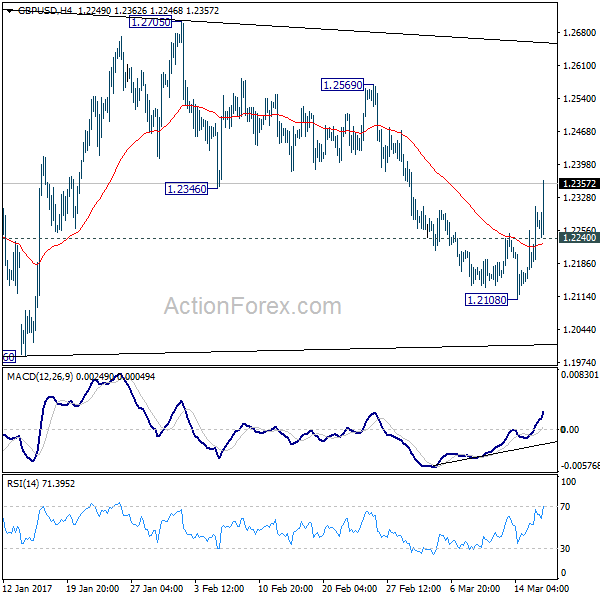 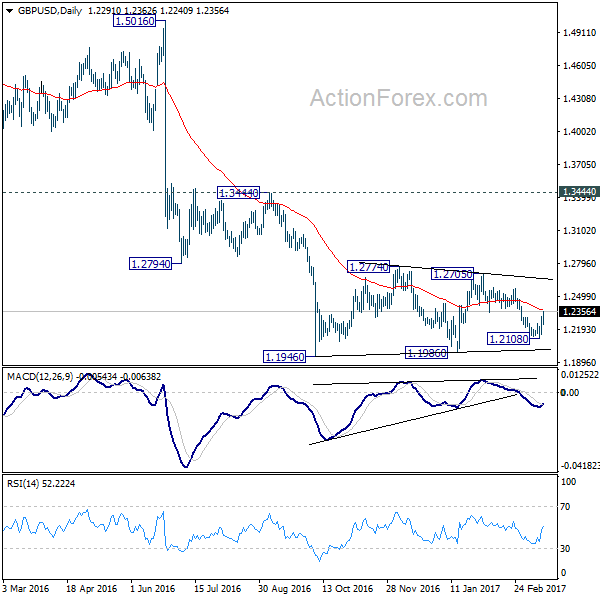