Global stock markets rebounded impressively today as traders looked past the first chapter of US-China trade war. Nikkei closed up 1.53% at 21645.42 earlier today. European indices are all trading up at the time of writing, with DAX gaining 2.44% being most impressive. CAC is up 2.07% while FTSE is up 1.68%. After the massive 700ps come back yesterday, DOW futures point to higher open and could have triple digit gain at open.

In the currency markets, Dollar is trading broadly higher for the day, followed by Kiwi. Swiss Franc is also trying to stage a come back after yesterday’s selloff. Worst than expected trade and job data is having no impact on the greenback. EUR/USD has indeed breached 1.2238 support, suggesting that it’s probably ready to head back to 1.22 handle. Sterling is trading as the weakest one today, after PMI services miss. In particular, GBP/USD breaches 1.4008 and is now having 1.3982 key near term support in radar.

What could China do after soybean weapon?

While stocks markets rebounded strongly today, the initial reaction to China’s retaliation tariff announcement was admittedly astonishing. In particular, announcement of soybean tariff came earlier than we, as well as the majority of market participants, had anticipated. What else can China do after this weapon has already been used? Some suggest that China can shift from tariff to financial markets, e,g.: to deliberately depreciate renminibi and reduce purchase of US government bonds. Here is an articular detailing the two options – China Announced Tariff on US Soybean Exports. What Next?

US trade deficit widened to USD -57.6b

UK PMI services dropped sharply to 51.7 in March, down from 54.5 and missed expectation of 54.0. That’s the lowest level in 20 months and it’s “partly linked to snow disruption”. Chris Williamson, Chief Business Economist at IHS Markit noted that the services sector suffered the “”weakest increase in business activity since the Brexit vote amid widespread disruptions caused by some of the heaviest snowfall in years. And as a result, Q1 growth will be “adversely affected”. The PMI surveys pointed to Q1 growth as just under 0.3%, slowed from Q4’s 0.4%. Markit also warned that inflationary pressures “picked up again in March”.

Eurozone PMI services was revised down by -0.1 to 54.9 in March. Markit noted in the release that “the final PMI numbers showed the weakest rise in business activity since the start of last year, adding to signs that the growth spurt has peaked”. PMI data indicates a 0.6% quarterly growth, still “impressive”. Meanwhile, some of the factors for loss in momentum was due to temporary factors, such as “bad weather and short-term capacity constraints”. April’s PMI data will be “particularly important” in “ascertaining true underlying growth momentum and in providing a steer on the likely timing of any ECB policy changes.”

Swiss CPI rose 0.4% mom, 0.8% yoy in March, above expectation of 0.3% mom, 0.7% yoy. Annual rate also accelerated from February’s 0.6% yoy. But it’s way off the level that will trigger a change in SNB policy. Swiss Federal Statistical Office (FSO) noted that “various factors contributed to the 0.4% rise compared with the previous month, such as an increase in the price of international package holidays, air transport and hotel accommodation. However, prices fell for medicines and fuel.” 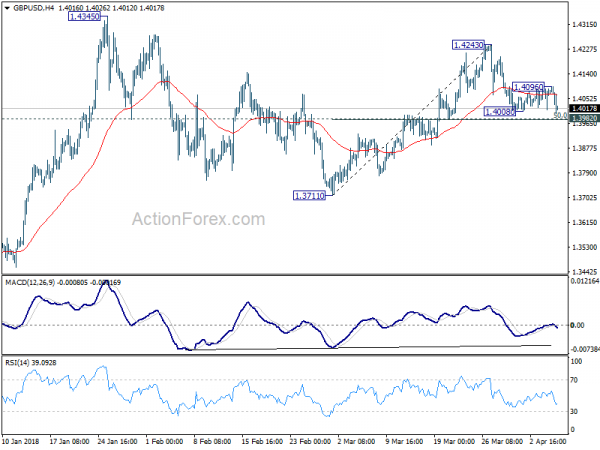 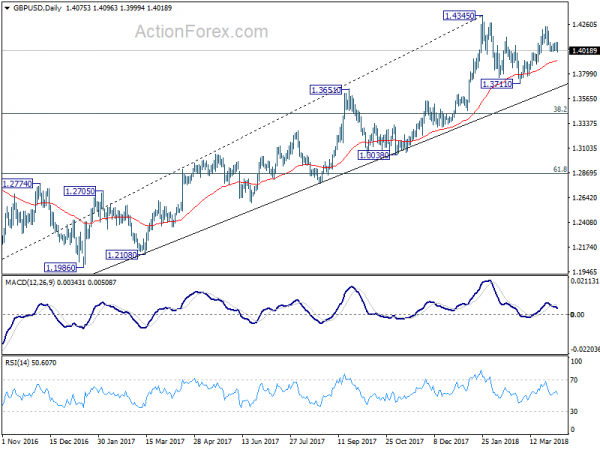