UK CPI and BoC to Guide the Markets as Sentiments Improved

Markets sentiments turned positive as there were now continuous flow of bad news. All three of DOW, S&P 500 and NASDAQ closed higher overnight, with NASDAQ scoring the best performance. Technically, all three have taken out 55 day EMA decisively which suggests more near term upside. Nikkei follow and is trading up more than 1.4% at the time of writing. In such environment, Japanese yen is trading broadly lower while Euro is generally higher in Asian session.

Looking at the currency markets, Sterling remains the strongest one for the week, together with Euro, despite yesterday’s setback. Swiss Franc is trading as the weakest one. EUR/CHF is now back trading at 1.1970 and is on track for the historical level at 1.2000, which SNB tried to defend and gave up in 2015. Many of us remember that day.

Sterling retreated, but stays strong on expectation of May BoE hike

The Pound has pared back some gains after yesterday’s mixed job. Unemployment rate dropped to 4.2%, lowest level since 1975. Employment also rose to a record high between December and February, adding 55k jobs. However, average weekly earnings grew only 2.8% 3moy, unchanged from January’s reading. That’s a disappointing to markets who expected 3.0% 3moy growth.

Nonetheless, the retreat is Sterling is so far shallow and it’s quickly regained some ground in Asian session. Also for the moment, the Pound remains the strongest one for the week, and the second strongest for the month, on firm expectation of May BoE hike.

According to the latest Reuters poll, all but 7 of the 76 economists surveyed expected a 25bps hike in the Bank rate to 0.75% in May. The question is indeed on whether BoE would hike again in November. According to the poll, only 37 of 62 economists expected the Bank Rate to be at 1.00% or higher by the end of Q1 next year.

Sterling needs something from there CPI report to give it another bull run.

BoC to stand pat, but may signal readiness for another hike

BoC rate decision is another major focus of today. For now OSI is only pricing 20% chance of a hike today. And it’s generally expected that BoC will keep the policy interest rate unchanged at 1.25%. Strong employment data and business outlook survey prompted speculation that BoC would hike again soon. And sentiments were also lifted by surge in oil price, as well as positive sign in NAFTA talks. It’s know that Trump is pushing to have a quick resolution to NAFTA for many reasons.

However, it should be noted that trade dispute with the US could remain an ongoing problem. And the 232 steel and aluminum tariff could come back should NAFTA talks collapse. That’s seen as one of the biggest risks for the Canadian economy. Additionally, we’d like to point out that IMF has lowered Canada growth projection by -0.2% to 2.1% in 2018. (A summary table can be found here). All advanced economy but Japan’s and Canada’s projection for 2018 were revised up. The outlook of the Canadian economy might not be as strong as others think.

Traders will certainly look for clues that BoC is ready for another rate hike. If not, focus will turn to Friday’s CPI and retail sales.

Japanese Prime Minister Shinzo Abe is meeting Trump in Florida now. Facing domestic political turmoil, Abe is seeking to achieve something out of the summit. The first and foremost is the 232 steel and aluminum tariff of the US. While most other major partners, like South Korea, got exemptions, there is no progress for Japan yet. White House economic advisor Larry Kudlow said waiver on the tariffs, negotiation of new trade agreement are “all on the table”.

Abe could try to persuade Trump in rejoining the Trans-Pacific Partnership, which Japan has been leading since Trump’s withdrawal. There were signs that Trump is reconsidering. But he continued to pour cold water. Trump just tweeted today that “while Japan and South Korea would like us to go back into TPP, I don’t like the deal for the United States. Too many contingencies and no way to get out if it doesn’t work. Bilateral deals are far more efficient, profitable and better for OUR workers. Look how bad WTO is to U.S.”

The Korean Peninsula issue is another focus of the summit. Japan, as the leader and closet ally of the US in the region, has so far been bypassed regarding the issue. There could be public perception that Abe is not being consulted, or even being involved in the talks between the US and North Korea. And that would hurt Abe’s own political credibility, which is already at risk.

Regarding the summit between North Korea and the US, Trump said that “we have had talks at the highest level.” But later White house spokesman Sarah Huckabee Sanders clarified those talks were not with Trump directly. Meanwhile, give locations are being considered for the highly anticipated between Trump and North Korean leader Kim Jong-un.

Chicago Fed President Charles Evans he didn’t see an “outsized risk of a breakout in inflation”. And as long as that picture continues Fed can “increase rates gradually while monitoring any rising inflationary pressures.”

Evans was indeed referring to the risk of 70s style overheating in inflation, as central banks fell behind the curve. And Fed was forced to push up interest rates aggressively in response, which ensued a recession.

But this time, he didn’t expect inflation to pick up as quickly or as problematically as it did in the 70s. And therefore, “the federal funds rate does not need to be increased as much above its neutral setting as in the past when trend inflation needed to be taken down several notches.” And, “gradual policy increases in this context make sense—certainly as a way to limit the damage if policy ever actually becomes overly tight too soon.”

San Francisco Fed Williams: Inflation will stay above target for another couple of years

San Francisco Fed President John Williams said yesterday that inflation is going to rise to and then stay above the 2% target for “another couple of years” even though Fed continues with its tightening path. And he’s not worried because “there are global factors that are holding inflation down.”

Also, Williams was not concerned with the problem on inverted yield curve. Fed’s rate hike will push up short term rates. But at the same time, Fed is unwinding its balance sheet and that will also push up long-term rates. He added that “I personally don’t anticipate having an inverted yield curve in the next few years.” But he would see “an inversion of the yield curve as a warning sign that sentiment is that growth is going to slow markedly.”

Regarding the trade spat between Trump and other countries, he said “what worries me about trade discussion beyond what’s happened is if we have continued uncertainty over trade policy what’s going to happen over the next few years.” And, the uncertainty itself can have a “negative” effect of businesses.

USD/CAD’s decline from 1.3124 resumed and dipped to 1.2526. But downside momentum is weak and there is no follow through selling yet. Nonetheless, intraday bias will now stay on the downside. Further fall would be seen to 1.2061/2246 support zone. However, break of 1.2622 minor resistance will indicate short term bottoming. And lengthier consolidation would be seen before another fall. 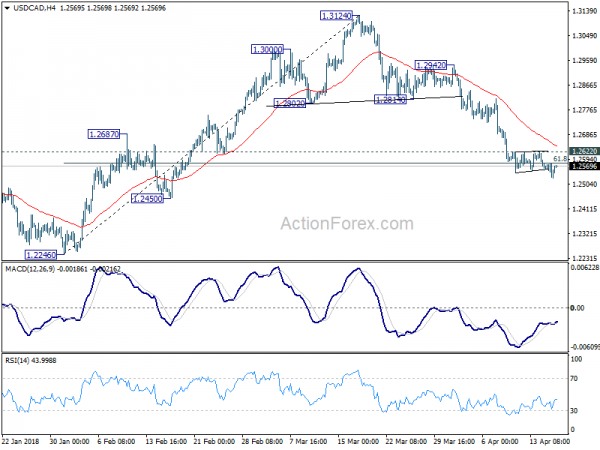 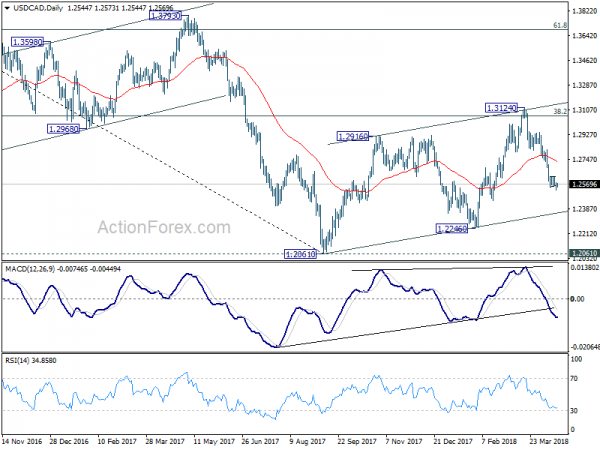