Australian dollar is steady after RBA left cash rate unchanged at 1.50% as widely expected. Governor Philip Lowe continued to be confident on the economy. He noted in the accompanying statement that “the bank’s central forecast for the Australian economy remains for growth to pick up, to average a bit above 3 percent in 2018 and 2019.” RBA forecasts growth to be “a bit above 3%” in both 2018 and 2019.

Nonetheless, growth in employment “has slowed over recent months”. Unemployment rate steadied at around 5.5% as participation rate rose with employment. While the job market will have “solid growth” ahead, low wage growth is “likely to continue for a while”. Inflation data were “in line” with RBA’s expectations and is expected to be “a bit above 2%” in 2018.

Overall, the statement suggested that RBA is in no rush to raise interest rates even though the economic outlook remains upbeat.

The Australian Industry Group Australian Performance of Manufacturing Index dropped -4.8 pts to 58.3 in April. AiG noted in the release that it indicated a “slower – but still buoyant – rate of expansion”, after reaching a record high in march. April was also the nineteenth month of expanding or stable conditions, the longest run of continuous expansion since 2005.

Stocks dropped -6.2 to 49.8. Exports dropped -10.9 to 48.0, first contraction since October 2017. AiG noted that “Exports weakened in the food and beverages and the petroleum, coal, chemicals and rubber products sub-sectors.”

New Zealand’s Finance Minister Grant Robertson emphasized is his pre-budget speech today that the center-left coalition government will stick to the “Budget Responsibility Rules”. He added that means Budget 2018 will deliver a surplus, and surpluses in subsequent years.”

Robertson added that “we will reduce the level of net core Crown debt to 20 per cent of GDP within five years of taking office.: And, “we owe it to future generations to be fiscally responsible, given the risks New Zealand faces in terms of natural disasters and global economic shock.”

The budget will be announced on May 17.

Just before the temporary exemptions on the steel and aluminum tariffs expire today, Trump announced to a 30-day extension on European Union, Mexico and Canada, allowing for further negotiation. Meanwhile, the US has reached trade agreements-in-principle with Argentina, Australia and Brazil and details with be finalized “shortly”.

The White House said in a statement that “in all of these negotiations, the administration is focused on quotas that will restrain imports, prevent transshipment, and protect the national security.” And it added that “these agreements underscore the Trump administration’s successful strategy to reach fair outcomes with allies to protect our national security and address global challenges to the steel and aluminum industries.”

UK data is the major focus in European session with Germany, France and Italy on bank holiday. PMI manufacturing is expected to dropped to 54.8 in April, down from 55.1. After a string of weak economic data, including last week’s Q1 GDP, the expectation of a May BoE rate hike is rather low. The PMI data to be released this week will give some hint on how the UK economy is rebounding in Q2. That’s still important in gauging the chance of BoE hike this year, maybe in November. UK will also release mortgage approvals and M4 money supply.

Later in the data, Canada GDP will be one major focus as BoC could still raise interest rate one more time in first half, given that NAFTA negotiations could be closed satisfactorily. US will release ISM manufacturing and construction spending.

AUD/USD dips lower to 0.7524 as recent fall resumes. Intraday bias is back on the downside with focus on 0.7500 key support level. Decisive break there will indicate medium term reversal and target next support at 0.7328. On the upside, above 0.7583 minor resistance will suggest short term bottoming. In that case, stronger rebound would be seen back to 0.7642 support turned resistance.

In the bigger picture, medium term rebound from 0.6826 is seen as a corrective move. Decisive break of 0.7500 key support will suggest that such correction is completed. In that case, deeper decline would be seen back to retest 0.6826 low. In case of another rise, we’d expect strong resistance from 38.2% retracement of 1.1079 to 0.6826 at 0.8451 to limit upside to bring long term down trend resumption eventually. 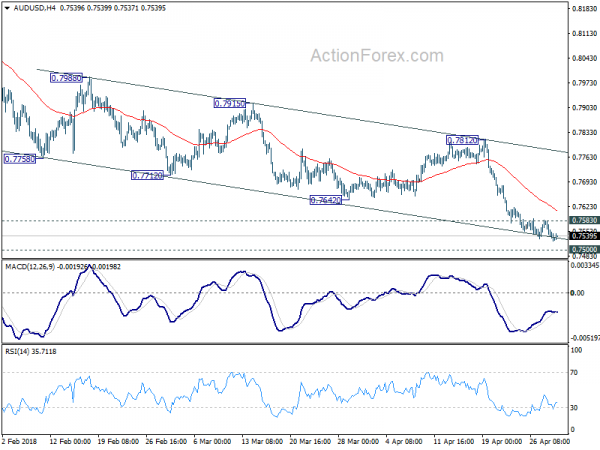 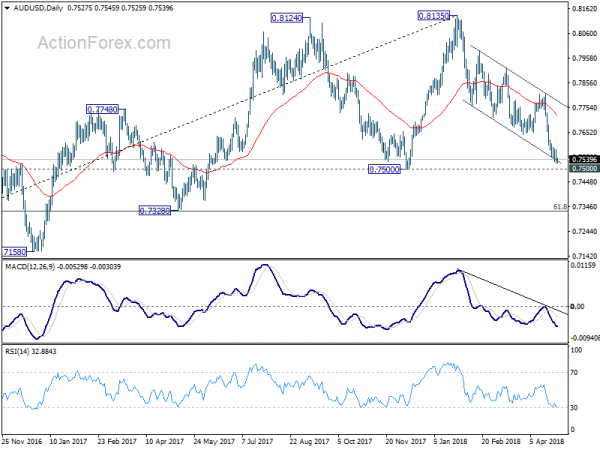