Action Forex
HomeAction InsightMarket OverviewYen Continues to Shine as Sentiments Weighed Down by Italy and Trade...

Italy political turmoil and trade tensions are weighing on market sentiments on two fronts. Italy will now likely go into a snap election soon. And the eurosceptic parties will frame that as referendum on Euro membership. US President Donald Trump reignites trade spat with China while NAFTA negotiation is going nowhere. More importantly, probably no one knows what’s coming next when temporary exemption on US steel tariffs expire on June 1, this Friday.

Technically, Yen crosses remains in near term down trend in general. USD/JPY’s strong break of 108.82 now opens up the case for deeper fall to 107.20 fibonacci level. USD/CHF recovers after touching near term trend line support and could be heading back up. EUR/CHF broke a key support level at 1.1445 and could be heading to 1.12 handle. The contrasting outlook in USD/CHF and EUR/CHF is worth some attention.

Italian Prime Minister designate Carlo Cottarelli didn’t present his cabinet to President Sergio Mattarella at the meeting yesterday. The president’s spokesman Giovanni Grasso said that “the prime minister-designate met with the president and told him about the current situation. The two will meet again tomorrow morning.”

It’s obvious that the caretaker government won’t have enough confidence vote. Whether Cottarelli make up a list of ministers or not, an early election is the most likely outcome. It’s possible that Mattarella could dissolve the parliament in the coming days. With that, a snap election could be held as soon as July 29 or in early August. The anti-establishment parties could frame the election as a referendum on staying or leaving Euro.

From a fact sheet titled “President Donald J. Trump is Confronting China’s Unfair Trade Policies“, it’s said that “China has consistently taken advantage of the American economy with practices that undermine fair and reciprocal trade.” And it accused that “China has aggressively sought to obtain technology from American companies and undermine American innovation and creativity.”

The statement noted that “President Trump has taken long overdue action to finally address the source of the problem, China’s unfair trade practices that hurt America’s workers and our innovative industries.” And, “President Trump has worked to defend America’s intellectual property and proprietary technology from theft and other threats.”

The Chinese Ministry of Commerce responded in a statement that the US statements were unexpected yet expected. It said the today’s statement contradict the consensus reached in Washington not long ago. And the MOFCOM pledged that “China has confidence, ability, and experience to safeguard the interests of the Chinese people and the country’s core interests. China urges the United States to act in accordance with the spirit of the joint statement.”

Canada PM Trudeau: No Nafta is better than a bad deal

Canadian Prime Minister Justin Trudeau dismissed the threat of auto tariffs of the US as “negotiating tactic” for NAFTA. And emphasized that won’t push Canada to accept a bad deal. He added that “quite frankly that’s simply not something we’re going to do.” Trudeau also reiterated that “no Nafta is better than a bad deal” and “we are not going to move ahead just for the sake of moving ahead.”

He also talked down the collapse of NAFTA negotiation and said “the interconnectedness between the Canadian and U.S. economies is not going to change any time soon” and “you can’t get around geography”. And, “we are their (the Americans’) number one customer and there is no question that any disruption of that flow of goods, yes, would be terrible for the Canadian economy but would also be pretty terrible for a lot of U.S. jobs.”

Canadian Foreign Minister Chrystia Freeland is in Washington meeting with US Trade Representative Robert Lighthizer. She said there were “very productive discussions” but declined to give any details. Asked about the temporary exemption on steel tariffs that’s going to expire this week, Freeland said “our government always is very ready and very prepared to respond appropriately to every action. We are always prepared and ready to defend our workers and our industries.”

Trump brought up the issue of border wall again yesterday and said Mexico “do absolutely nothing to stop people from going through Mexico, from Honduras and all these other countries … They do nothing to help us.” And he said “in the end, Mexico is going to pay for the wall.” Mexican President Enrique Pena Nieto responded in his tweet saying that “President @realDonaldTrump: NO. Mexico will NEVER pay for a wall. Not now, not ever. Sincerely, Mexico.”

To recap, there are a few deadlines for NAFTA negotiations to complete. Firstly, the temporary exemption on US steel and aluminum tariffs will expire on June 1 and it’s uncertain what will happen. Mexico Presidential election is upcoming on July 1. Timing is running out, or has already run out, for the current Congress to approve the new NAFTA deal within this year. And less pressing, the US has started national security investigation on automobile imports that could lead to new tariffs.

BoC is widely expected to keep interest rate unchanged at 1.25% today. Given the uncertainty around NAFTA, steel tariffs and the upcoming auto tariffs, the central is unlikely to give any hint on the timing of the next hike. Governor Stephen Poloz possibly doesn’t have a clue himself too. Canada will also release IPPI and RMPI as well as current account. 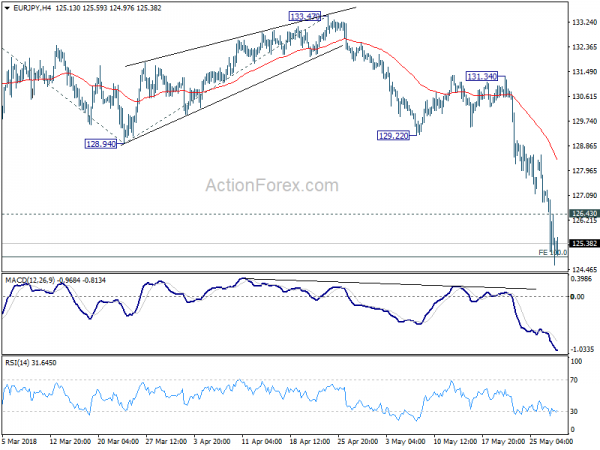 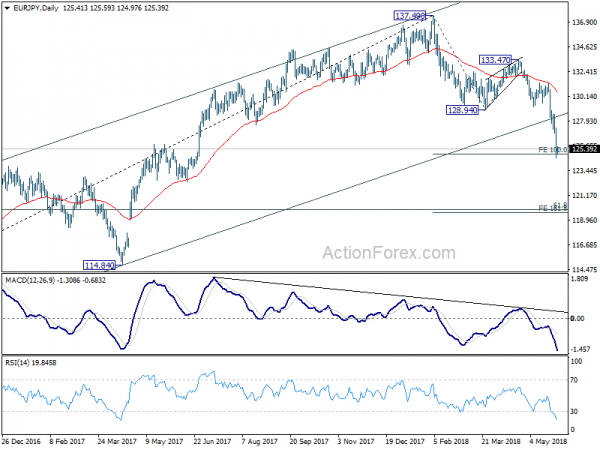