Action Forex
HomeMarket OverviewWeekly ReportA Look at Why Dollar Failed to Surge on Strong US Job...

It was a roller coaster week with political turmoil in Italy dominated the first half of the week. The formation of the populist Italian government after acceptance by President Sergio Mattarella marked the end of the episode. Trade war then took over as US President Donald Trump decided to let the temporary exemptions of Canada, Mexico and the European Union on steel and aluminium tariffs expire. That drew strong worded responses and retaliation from these supposed US allies. But investors seems to be rather unbothered by their spat as US and European stocks ended Friday higher.

In the currency markets, Japanese turned from being the strongest one to end as the weakest one as Italian political crisis faded temporarily. Dollar was the second weakest even though the US delivered a non-farm payroll report that beat expectations on all front. Market pricing on the Fed’s rate path is back to normal after much volatility. Euro was the third weakest one, which is more understandable as the clash between Italian leaders and EU is inevitable. New Zealand Dollar ended as the strongest as recent corrective rebound extends. Sterling turned from being the weakest to end as the second strongest as lifted by PMI manufacturing. Australian Dollar was the third strongest, shrugging off all the events.

The lack of follow through buying in Dollar after non-farm payroll report was a bit puzzling. The job market grew 223k in May, above expectation of 190k. Unemployment rate dropped to 3.8%, beat expectation of 3.9%. That’s also the lowest level in 18 years. More importantly, wage growth was solid. Average hourly earnings rose 0.3% mom, beat expectation of 0.2% mom.

So why was there no decisive strength in Dollar? An explanation is that Dollar is well past the buying climax on surge in yield, monetary policy divergence, and geopolitical risks. For Eurozone, the Italian risk is now temporarily off. Change in Spanish prime minister was well received by the markets. And more importantly, economic data were positive. German CPI surged to 2.2% yoy in May. French CPI was even strong as it jumped to 2.3% yoy in May. Both were above ECB’s target. Overall Eurozone CPI also rose to 1.9% yoy, up from 1.2% in April and beat expectation of 1.6% yoy. It’s actually quiet close to, and slightly below ECB’s 2% target. The rebound in CPI should have cleared much worries of ECB policymakers. And that should put ECB back on track for ending the asset purchase program this year, even after September.

Similarly, economic data from UK is no longer overwhelmingly bad any more. UK PMI manufacturing rose to 54.4 in May, beat expectation of 53.5. That’s a sign of stabilization in the slowdown. More UK data will be coming in this week, including construction and services PMIs. These data could reveal the strength of rebound in Q2. For now, a August BoE hike still seems distant. But a November hike is not out of question. The worst in BoE expectation should be past.

While Yen dropped broadly last week, it should be noted that the yield drive rally might not be over. Sharp fall in German bund yield and UK Gilt yield might be over in the near term. But they’re technically both in down trend. US 10 year yield could have established a range for consolidation as noted before. But there is not much prospect of quick up trend resumption. 3.0-3.2 represent an important resistance zone that’s close to multi decade trend line. It’s not that easy to get through it without fresh stimulus. Resistance in Yen might be a factor that drag on Dollar’s rally ahead.

BoC statement last week was also more hawkish than expected. In the accompanying statement, BoC suggested that “developments since April further reinforce Governing Council’s view that higher interest rates will be warranted to keep inflation near target”. With the reference, “over time”, dropped, the market expects a rate hike would come soon. That may keep the Loonie supported despite being hit hard by Trump’s steel tax imposition and there is never-ending uncertainty with NAFTA negotiation. If Canadian Dollar falls again, it will likely be because of selloff in oil prices.

Considering the above factors, it would likely take some time before the greenback get fresh stimulus for resuming the up trend that started back in February. That could be the time when markets are convinced that Fed will hike for the fourth time this year in December. Indeed, the dollar index has clearly lost momentum, as seen in daily MACD, as it approached 95.15 resistance. The stage could be set for some more consolidation below 95.15. Though, we’d expect strong support from 92.24 to contain downside in case of a pull back.

EUR/USD dropped further lower to 1.1509 last week but formed a short term bottom there and rebound. Initial bias is neutral this week for consolidation and stronger recovery cannot be ruled out. But we’d expect strong resistance from 1.1822/1995 resistance zone to limit upside and bring fall resumption eventually. On the downside, break of 1.1509 will resume the decline from 1.2555 and target 50% retracement of 1.0339 to 1.2555 at 1.1447 first. Break will target 61.8% retracement at 1.1186 next. 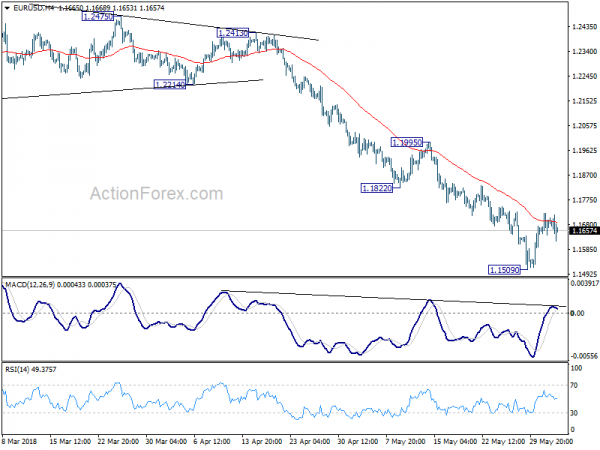 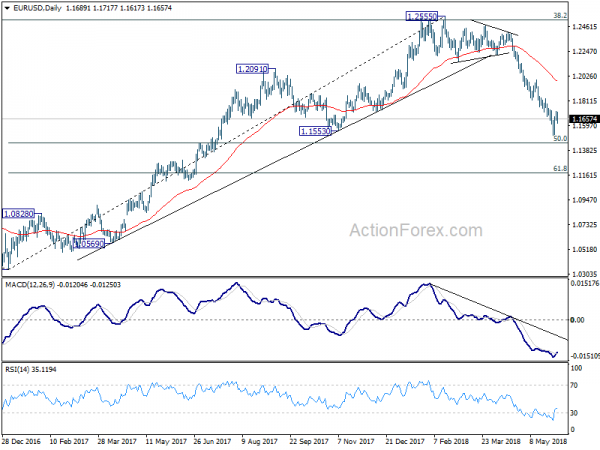 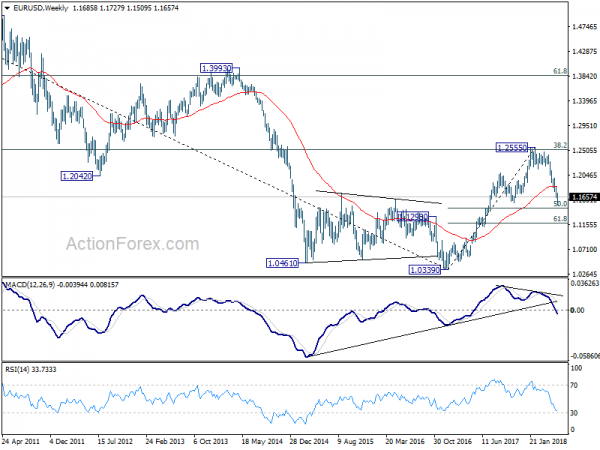 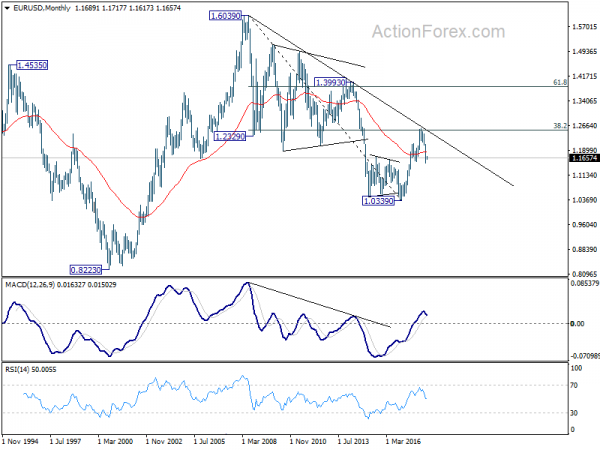