Canadian Dollar ended last week as the strongest one. Strength in oil price, with WTI hitting four-year high was a factor. Solid Canadian GDP and Business Outlook Survey also support a July BoC hike. Euro followed as the second strongest as markets cheered EU agreement on migration during the summit. That could be seen as temporarily easing German Chancellor Angela Merkel’s domestic political pressure too. Despite some late setback, Dollar was the third strongest. It’s more likely the the Greenback is taking a breath after a strong quarter, than reversing. On the other hand, New Zealand Dollar ended as the weakest one after dovish RBNZ suggested that it stands pat longer. Yen ignored risk aversion and ended as the second weakest, followed by Australia Dollar.

Dollar index to have more consolidations first before heading to 97.82

For now, despite all the uncertainties around trade wars, markets’ pricing on Fed rate path is largely unchanged. And Fed is on course for having two more hikes this year. Dollar’s near term fate will mostly depends on how monetary policies in other countries are playing out. ECB has unveiled their cards already. That is, QE is set to end this year, with rate staying at current level until summer 2019. However, whether BoC would hike in July and BoE would do too in August are both uncertain.

Trade tensions so far seem to be Dollar supportive, or at least, not Dollar negative. Dollar index hit a low at 88.25 back in February and the trend reversed since then. During the period, Trump announced the section 232 steel and aluminum tariffs on everyone. Temporary exemption for Canada, Mexico and the EU ended on June 1. Trump raised the stakes against these closet allies by threatening auto tariffs. In between there was section 301 intellectual property tariffs on China, which prompted equal scaled retaliation to be effective on July 6. Trump also raised the stakes by threatening tariffs on additional USD 100B of Chinese products. Dollar index has been in an up trend along these developments. Based on such correlation, as we’re expecting Trump to isolate the US further from the rest of the world further, Dollar is in favor to head higher.

Technically, Dollar index tried to break through 95.15 resistance last week on another attempt. But it failed to sustain above that level again. Upside momentum is seen diminishing in daily MACD, suggesting DXY has topped out in near term at 95.53. We’d likely see some more consolidation first. But downside should be contained by 93.19 support. Rise from 88.25 is expected to resume at a later stage to 61.8% retracement of 103.82 to 88.25 at 97.82.

DOW’s price actions on Friday revealed some underlying weakness in traders’ sentiments. It hit as high as 24509 but pared back nearly all gains to close at 24271.41, just up 0.23%. Escalation in trade tensions between US and its closest allies and trade partners is deeply worrying for businesses. Two auto groups blasted Trump’s using national security threat as a excuse to impost car tariffs. General Motor also submitted its comments to the Commerce Department regarding the negative impacts on auto tariffs. GM warned that “increased import tariffs could lead to a smaller GM, a reduced presence at home and risk less — not more — U.S. jobs”.

But Trump is not going to listen to his fellow Americans anyway. When asked about the Section 232 national security probe on auto industry, Trump said it would be concluded “very soon” and “it’ll be done in three, four weeks. It should be noted that the timeline is unusually fast. Similar probe that led to steel and aluminum tariffs took 10 months to complete. The Commerce Department, by law, has 270 days to offer recommendation. And the President has 90 days to act. But of course, to made a decision based on studies, or to do a study to support a decision, things could be done at vastly different pace.

NASDAQ suffered steep loss last week on worries that the US is moving close to curb foreign investment in technology companies. Messages from Trump’s administrations were initially confusing and conflicting. But in the end, a “softer” way was chosen on “protecting” US technologies from other countries. A upgraded version of the so called  Committee on Foreign Investment in the United States (CFIUS)  would be used. Still, as White House economic advisor Larry Kudlow said, the modernized CFIUS is “not meant to be harder or softer.” And, it will not only restrict investments in US tech companies by China, but everyone else.

Friday’s price action in NASDAQ shows clear weakness in underlying sentiments. It reached as high as 7573.59 but reversed almost all gains to close just up 0.09% at 7510.30. The downside acceleration from 7806.60 suggests that it’s a medium term correction. This is supported by bearish divergence condition in daily MACD too. Near term outlook stays bearish as long as 7160.67 resistance holds. Sustained trading below 55 day EMA will pave the way to 6991.14 support, in proximity to 7000 psychological level.

Given that BoC rate decision on July 11 is less just two weeks away, Governor Stephen Poloz’s speech last week was highly anticipated. The messages were mixed as there were something for both hawks and doves. In our view, Poloz was very clear that economic models support a July hike. This was further affirmed by the surprised growth in April GDP. BoC’s quarterly Business Outlook Survey indicator, rose to the highest level since 2011, even after US steel and aluminum tariffs. and threat of auto tariffs.

However, Poloz also pointed out there are things that are not incorporated in the models. Most notably, impact of rising trade tension with it’s closest neighbor and ally is something that’s hard to measure. These factors will “figure prominently” in the upcoming BoC deliberations. So, even if BoC does deliver a hike, it could well be a dovish hike that comes with signal of pausing.

WTI crude oil in strong rally, but to be capped by 80 handle

To our surprise, the strength in WTI crude oil was stronger than expected. That’s partly due to the huge decline in US oil inventory. And of course, the momentum was already there as OPEC+ decision on production raise a week ago was much smaller than expected. 72.83 resistance was taken out last week with relative ease. Now, the medium term up trend from 2016 low at 26.05 has resumed and further rise would be seen to 61.8% retracement of 107.68 to 26.05 at 76.50, and possibly above.

But so far, we’ve got an impression that 80 is a level where OPEC member generally don’t want to touch. Therefore, we’ll likely see WTI starting to feel heavy as it approaches 161.8% projection of 26.05 to 51.67 from 41.18 at 82.44. But for the near term, oil price would provide some support to Canadian Dollar.

RBA rate decision ahead is an event that’s worth a watch. Australian Dollar was the second weakest one in June on a couple of factors. RBA’s own confusing communications was one of the factors. In the May meeting minutes released on June 19, RBA omitted the language saying that  it is “more likely that the next move in the cash rate would be up, rather than down”. But in between, the meeting and the minutes, Governor Lowe said that  it “is likely that the next move in interest rates will be up, not down”. So, what is RBA trying to tell? Lowe ought to make use of this week’s statement to clear the picture.

At the same time, the more dovish than expected RBNZ statement also prompted some speculations that RBA could follow suit. It should be noted that in the background, there is tremendously high risks of escalation in trade tension between the US and China. Based on its close ties with both countries, Australia will inevitably be affected. The worsening of the situation is clearly reflected in the Chinese stock markets as the Shanghai SSE extended recent decline to close at 2847.41 last week, down from prior week’s close at 2889.76.

The selloff only slowed after China’s central bank PBoC injected RMB 700B in liquidity to the markets by lowering the reserve requirement ratio. The central bank also signaled later in the week that it’s shifting its policies to measured deleveraging to “maintain adequate liquidity” in the markets. These moves suggest that the government is not going to intervene in the markets directly at this level. And they could well let the index fall through 2016 low at 2638.3. The outlook of Chinese economy will be important food for thoughts for RBA board. 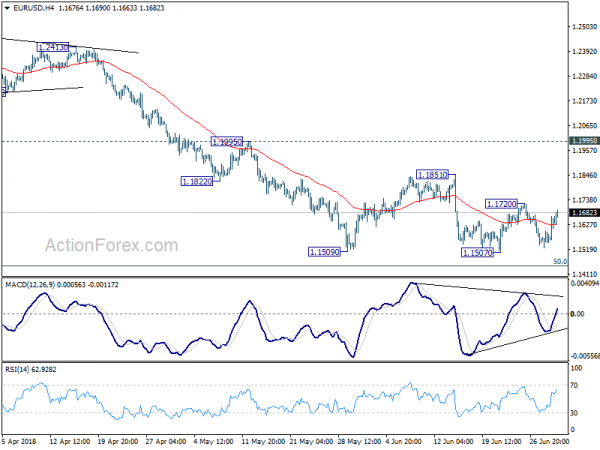 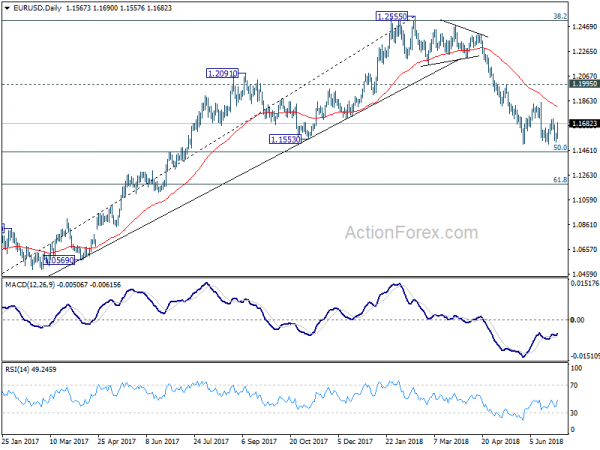 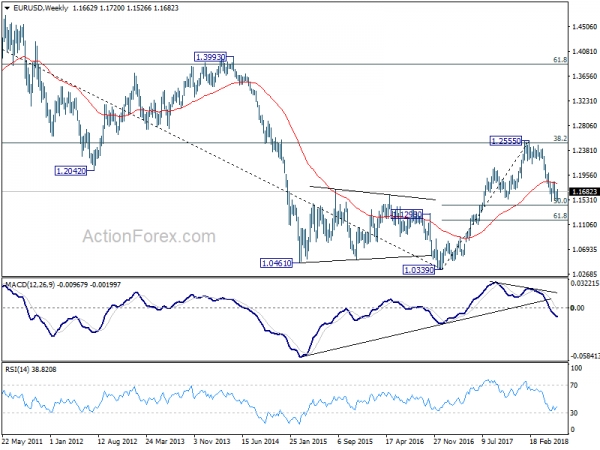 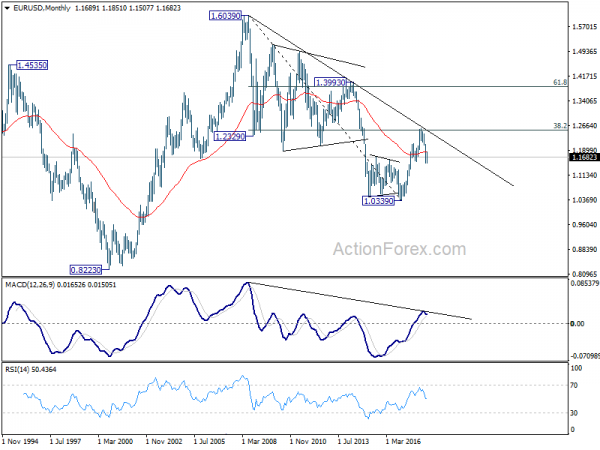