How Did Stocks, Bonds and Dollar React to Trump’s Attack on Fed?

Dollar was sold off sharply on Friday but, after all, it ended the week only as the third weakest. Sterling was the worst performing one after triple data disappointment, most notably CPI. The once done-deal BoE August rate hike is now back on the table. Australia Dollar ended as the second weakest one and that was a surprise given the stellar June Australian employment data. Swiss Franc and Yen were the strongest ones. But that was not due to risk aversion nor falling treasury yields.

Trump occupied a lot of headlines with his summit with Russian President Vladimir Putin in Helsinki, for the earlier part of the week. But it was an oddly-timed CNBC interview at the White House that caught the most attentions of market traders. There Trump doubled down on trade war rhetorics with China again, threatened to impose tariffs on up to USD 500B in Chinese imports, that is, all of them. Trump also attacked Fed on its policy normalization which is seen by some as verbal intervention. Later on Friday, he went further to call China and EU as manipulating their currencies and tweeted that Fed’s “tightening now hurts all we have done”.

Some attributed Trump’s attack on Fed as the trigger for the Dollar selloff. But we find that theory difficult to agree to.

For December meeting, Fed fund futures are pricing in 61.3% chance of another hike to 2.25-2.50% and above. That compares to 62.32% a day ago, 56.5% a week ago and 48.2% a month ago. That is, market expectations on Fed’s rate path this year hasn’t changed much on Friday. And the expectation has indeed firmed up comparing to a week and a month ago.

30 year yield closed Friday up strongly by 0.064 at 3.031, much more than enough to regain the 3% handle. Some analysts explained the rise as speculations that Trump would eventually make (one way or the other) Fed slow down the pace of policy normalization. And with the massive fiscal stimulus in place, the economy is ready to heat up with surge inflation expectation.

However, it should be noted that firstly, some Fed officials have repeatedly expressed their concerns on flattening yield curve, and warned of further hikes that could invert it. Now, with relatively much larger jump in 30 year yield, the yield curve has indeed steepened, which gives Fed more room to continue with rate hike.

Secondly, as Fed chair Powell noted in his testimony, yield at the long end gives an indication on where the neutral rate is. That is, rising 30 year yield could indicate a higher neutral rate, and give Fed more numbers of hikes before interest rates hits restrictive region. Thus, it should be Dollar positive, but we saw dollar dropped sharply instead. So, we’re “not too happy” with such explanation.

10 year yield did close up 0.048 on Friday to 2.895. But percentage-wise and structure-wise, the rise in TNX is not in proportion to that of TYX. So, that adds further to our doubt it’s driven by expectation of surging inflation. If the surge in TYX is due to expectation that heating up trade war will eventually leads to higher inflation, it’s not reflected equally in 10 year yield.

At the same time, we’re not seeing any movement in 5 year note yield at all. It closed Friday up 0.028 to 2.768. But that’s part of recent gyration around the 55 day EMA. 2 year note yield closed up 0.04 to 2.599, which doesn’t suggest any one paring expectation of slower Fed normalization neither.

The above observations just don’t, and cannot, add up to the story that “Trump’s attack on Fed drove down Dollar”. To us, it’s as simplistic as Trump’s scapegoating of other people like Trudeau, the EU, and possibly Fed Powell in the future, if we simply claim he talked down the Dollar.

On Friday, there was another piece of news that’s worth a mention. It’s reported that just as USD/CNY (onshore Chines Yuan) hit 6.81, a state-owned bank has stepped in selling Dollar to buy Yuan to support the currency. 6.8 is seen by some as the “red line” for intervention by the Chinese government. USD/CNY then dipped to as low as 6.764 before recovering to 6.789 and then dived again after hours to 6.765.

The “intervention” helped lift China Shanghai SSE composite up 2.05% on Friday to close at 2829.27, regaining 2800 handle. Hong Kong HSI also closed up 0.76%. For those who’ve been observing the Asian markets closely, it’s known that the free fall in Yuan since March was one of the key factors that hammered Chinese stocks. And we’ve mentioned numerous times that the the zone between 2016 low of 2638.30 and 2700 in SSE is somewhere that could prompt government intervention. There are enough reasons to believe that the Chinese government did step in to halt the Yuan’s slide to help support the stock markets. And try to give SSE a little push to make the rebound from 2691 self-sustainable.

Will Mnuchin ask China not to manipulate Yuan to stop its free fall?

US Treasury Secretary Steven Mnuchin said on Friday that the US is going to “very carefully review whether they have manipulated the currency”, referring to China. Now it’s getting more apparent that China is manipulating its currency to halt its slide, Mnuchin should come out and ask them not to do it again. (Or he actually wants to see it happen?)

Linking up the observations

Anyway, let us first repeat here again that we do not believe Trump’s attack on Fed has triggered any realistic change in market expectations on Fed’s rate path. Then, the movements in treasury yields were rather uneven that prompted us to suspect if there was any targeted selling in 30 year bond. Chinese Yuan is believed to have fallen to the red line that could have triggered government intervention already. Trump’s threat of tariffs of USD 500B of product is something that China cannot match tit-for-tat.

So, is a large US treasury holder starting to sell its holdings and switch the fund out of Dollar to other assets, say, Swiss Franc? If it’s what happened, it could have been reflected in the surge in 30 year yields and dive in Dollar.

Well, up to this point, it’s just ungrounded conspiracy only. Nonetheless, the above story could make some good alternative entertainment if you’re tired of political reality shows.

Dollar index to have more consolidation ahead, but stays bullish

Now, back to business. Despite edging higher to 95.65, Dollar index dropped sharply since then. Together with bearish divergence condition in daily MACD, dollar index should have formed a short term top already. More consolidative trading would be seen in near term, with risk of pull back to 55 day EMA (now at 93.91) and below. But, we’d expect strong support from 38.2% retracement of 88.25 to 95.65 at 92.82 to contain downside to bring rebound. Rise from 88.2 is expected to resume at a later stage, after the correction completes.

In last weekly report, we had a strategy of buying USD/JPY of a pull back. But that was cancelled on Friday as the order was not filled before USD/JPY rose to 113.17 and form a short term top there. It’s updated in the quick comments here during Friday morning.

USD/JPY edged higher to 113.17 last week but subsequent sharp fall indicates short term topping. Breach of 111.39 resistance turn support argues that it’s now corrective whole rise fro 104.62. Initial bias remains on the downside this week for 55 day EMA (now at 110.39). We’d expect strong support from 38.2% retracement of 104.62 to 113.17 at 109..90 to contain downside and bring rebound. On the upside, above 112.04 minor resistance will turn intraday bias neutral first. But break of 113.17 is needed to confirm up trend resumption. Otherwise, more condition would be seen with risk of another fall. 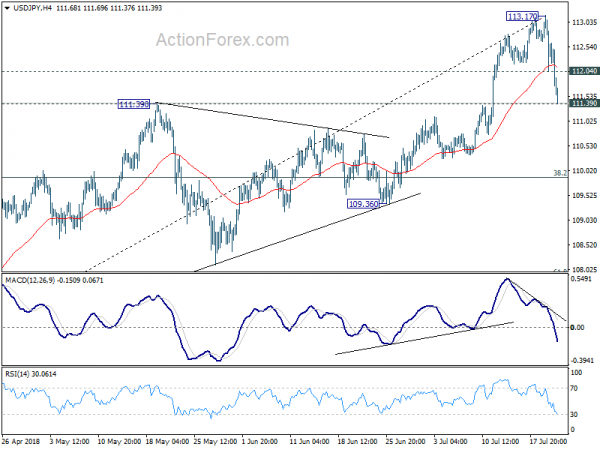 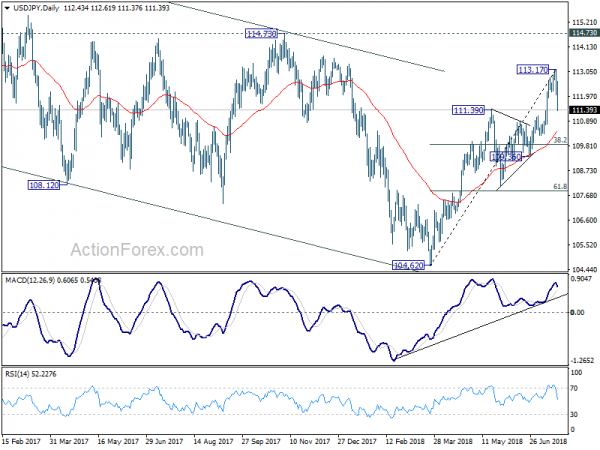 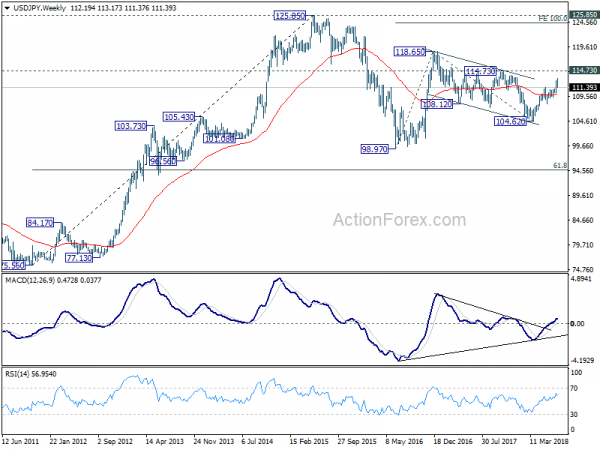 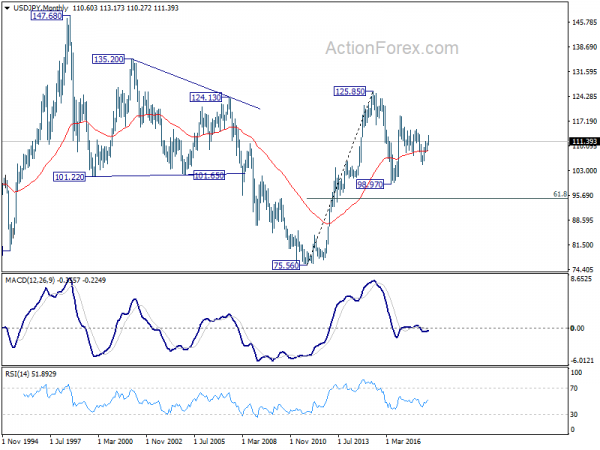