Action Forex
HomeMarket OverviewWeekly ReportDollar Not Ready to Resume Up Trend Yet, Risk Appetite to Continue

Dollar Not Ready to Resume Up Trend Yet, Risk Appetite to Continue

Yen and Swiss Franc ended as the weakest ones last week as global stock markets ended higher. There were some jitters in risk sentiments after US announced to move on with tariffs on additional USD 200B in China imports, which come effective as soon as in September. But investors were quickly relieved after China’s refrained response. While China still pledged to retaliate, there is no far no detail on the plan, not even leaked. On the other hand, while Dollar ended as the strongest one, the lack of further escalation in trade war limited its strength. Indeed, the late pull-back of the greenback on Friday argues that it’s not ready to resume recent up trend yet. Australian Dollar ended as the second strongest as particularly lifted by rebound in Asian markets. Sterling survived resignation of two ministers and Trump’s blasting of the softer Brexit plan, ended as the third strongest. Canadian Dollar was just mixed as the lift by hawkish BoC rate hike was offset by the sharp fall in oil price.

Going through all the noises, the main development last week was the weakness in Yen and Franc. That was primarily built on strength in global equities. In particular, NASDAQ hit record highs as it resumed the larger up trend. Near term strength in equities is anticipated. There could be some more positive news as European Commission President Jean-Claude Juncker visits China and Japan on Monday and Tuesday. China is known to look into EU to expand partnership on trade and investment, and on other issues like climate change. Juncker will also sign an Economic Partnership Agreement with Japan during the visit.

However, it should be noted that the risks of trade war is just temporarily taking a back seat and a lot of development is happening. The section 232 investigation in auto tariffs is undergoing and could be completed in weeks. That will be a huge blow to European and North American car industry. And China could be ready to step up with its rhetoric again once stocks rebounded to a level that’s comfortable for investors to see another selloff. So, for now, we don’t anticipate risk appetite to stay long.

Technically, DOW’s strong rebound last week suggested that fall from 25402.83 has completed at 23997.21 already. That temporarily removed the risk of further decline through 23344.52 support. Instead, favors are now on further rebound back to 25402.83, and possibly above to 25800.35. But after all, recent price actions are corrective looking. And even the rebound from 23997.21 is not impulsive looking. Hence, we’d hold on to the view that consolidation pattern from 26616.71 is not completed yet and there will be another fall through 23344.52 before up trend resumption.

The China Shanghai SSE survived Trump’s tariff threat on tariffs. After initial set back it rebounded strongly to close at 2831.18. The development reinforced our view that the support zone between 2016 low at 2638.3 and 2700 psychological level is a very strong one that was defended. For now, further rise is in favor through 2848.37 resistance. In the case, we’d likely see SSE have a go at 55 day EMA (now at 2979.01). But there is no prospect of regaining 3000 handle. Indeed, the Chinese government could start to feel comfortable to harden its trade rhetoric again above 2900. The index should revisit 2638/2700 again before turning around.

TNX staying in consoliation with near term upside prospect

Haven’t talk about 10 year yield so a while and it’s rightly so. Using BoE Cunliffe’s word, there have been some “stodginess” in TNX since May as consolidation continues. So far, the development affirm our view that price actions from 3.115 are corrective in nature. For the near term, considering diminishing downside momentum, there is prospect of a rebound. But there is little sign of upside range breakout yet. And we’d reiterate that 3.0-3.2 represents multi-decade trend defining resistance zone. So it’s not that easy to get through. Though, even in case of deeper pull back, we’d expect strong support from 38.2% retracement of 2.033 to 3.115 at 2.701 to contain downside and bring rebound. 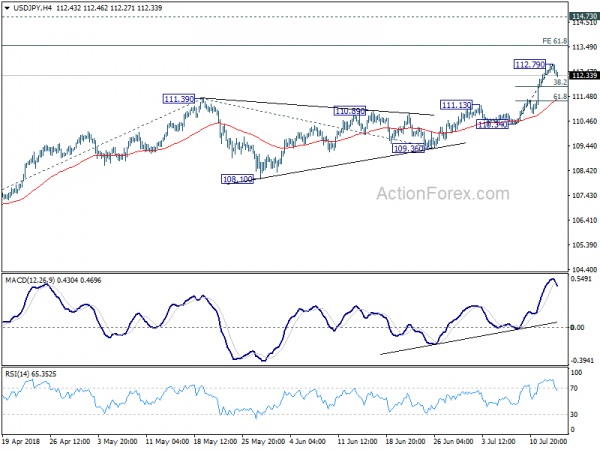 USD/JPY surged to as high as 112.79 last week and formed a temporary top there with subsequent retreat. Initial bias is neutral this week for consolidation first. Downside should be contained well above 111.13 resistance turned support to bring rally resumption. Current development affirms the case of medium term reversal. Above 112.79 will target 61.8% projection of 104.62 to 111.39 from 109.36 at 113.54 first. Break will put focus on 114.73 key resistance for confirming our bullish view. 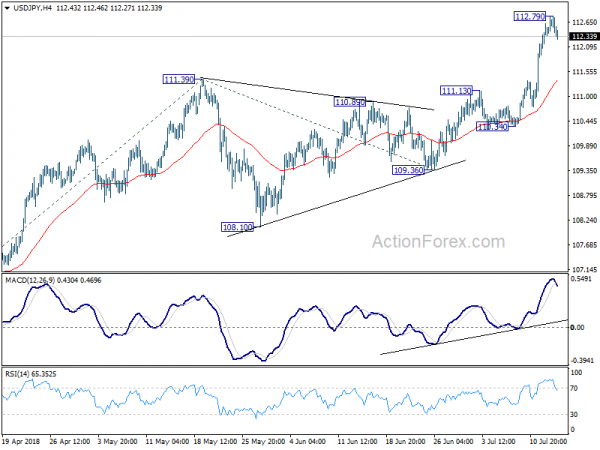 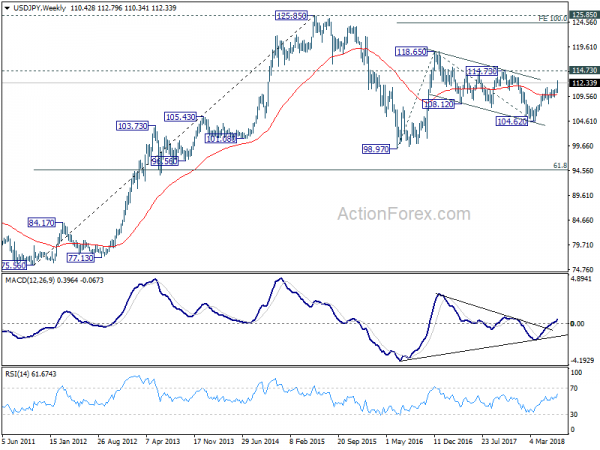 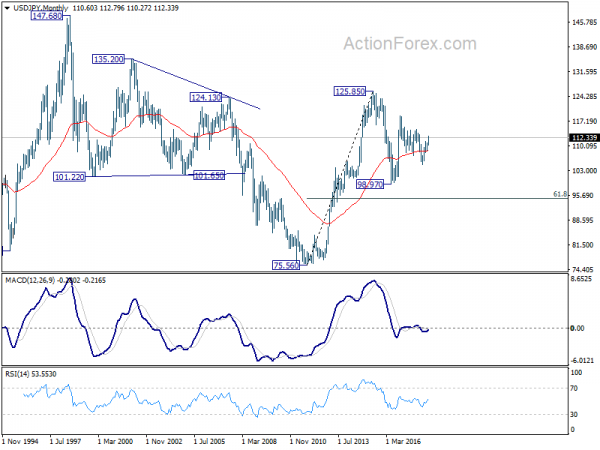 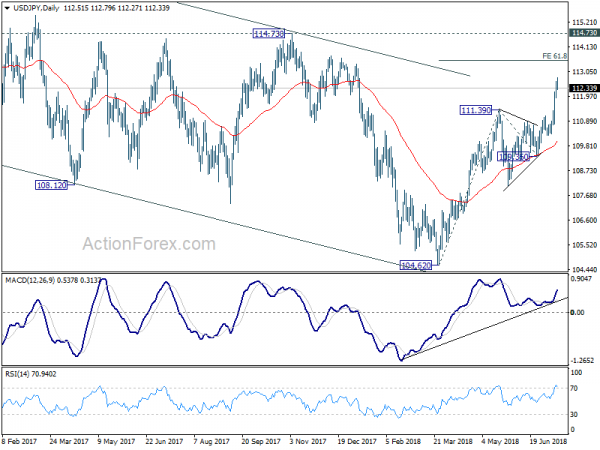