Action Forex
HomeMarket OverviewWeekly ReportCAD, JPY and USD Ended as the Strongest in a Week of...

CAD, JPY and USD Ended as the Strongest in a Week of Trade Talk and Surging Yields

EU-US trade talk and surge in yields in Japan and the US were the two major themes last week. But it was Canadian Dollar which quietly ended as the strongest one last week. US holding off car tariffs is definitely a positive for Canada and could clear the way for more BoC rate hikes. Meanwhile, news regarding NAFTA were also encourage as the three sides are aiming at having an agreement in principal in August. Yen ended as the second strongest one on surging JGB yield while Dollar ended as the third strongest.

ECB meeting totally met market expectation by being a non-event. While trade tension might be eased, the results out of the EU-US agreements are to be seen. Also, at this stage, there is no material impact on ECB’s policy path. The central bank will still keep its hands tight through next summer. Euro, thus, ended as the weakest one. Australian Dollar and New Zealand Dollar tied as the second and third weakest ones as movements elsewhere left them behind.

The visit of European Commission President Jean-Claude Juncker to the US for trade talk with President Donald Trump was one of the two most important theme last week. Out of our expectations, Juncker achieved fruitful results, with a joint statement with Trump. For the short term, Trump made a major concession to cease fire on trade war with the EU. While the national security investigation on auto imports will continue, Trump has agreed to hold off further tariffs as negotiations continue. For the long term, both sides pledged to work towards “zero tariffs, zero non-tariff barriers, and zero subsidies on non-auto industrial goods”. That should be positive to growth across the Atlantic ahead.

Euro’s response to the EU-US trade deal was lukewarm. But it was well received by stock investors. In particular, the threats of auto tariffs to German car makers are, at least temporarily, eased. DAX closed the week up 2.38% or 298.98 pts at 12860.40. Technically, rebound from 12104.41 is in progress, with near term bias on the upside for 13000 handle. The real test for it is in the resistance zone between 13000/13204.31. For now, DAX is seen as bounded in consolidative trading in converging range. Break of 55 day EMA (now at 12619.57), will start another falling leg towards 12104.41 support. DAX could only breakout after there is sign of completing the negotiation with the US.

French President Emmanuel Macron was a rare high profile politician that questioned the EU-US trade deal. Just immediately after the announcement of the trade deal, Macron openly warned that he would not made any concession on agriculture with the US. He insisted that standards on food safety and environment must not be abandoned in talks. And he raised it to the level of “principle at the heart of the European sovereignty I am calling for.” Later, Macron also said he opposed to negotiations for a comprehensive trade agreement with the US unless the issue of steel and aluminum tariffs is resolved. He said that “I have said from the beginning a good business discussion can only be held on the basis of equality, reciprocity and under no circumstances on threats”. And, “I am not in favour of launching into a negotiation of a vast trade accord like TTIP because the context doesn’t allow it.”

Meanwhile, the EU-US trade deal is clearly a bad news for China. In the statement, both sides agreed to join forces against “unfair global trade practices”. And specifically, the practices include “intellectual property theft, forced technology transfer, industrial subsidies, distortions created by state owned enterprises, and overcapacity.” That’s exactly talking about China. Now with the support from EU, it’s getting even less likely for Trump to go back to negotiation table with China, unless the latter makes some tangible and sizeable concession. We’ll more likely see the tension escalates on this side than not ahead.

While the China Shanghai SSE extended the rebound from 2691.02 last week, it started to lose momentum after hitting 2915.29. For the near term, further rise is expected as long as 2848.37 resistance turned support holds. But first hurdle is at 55 day EMA (now at 2938.60). Second hurdle is at channel resistance at 2981. Third hurdle is at 3000 psychological level. The rebound is unlikely to last long.

While the Chinese Yuan extended decline last week, momentum is seen diminishing. We’d like to emphasize again that for now, USD/CNY (on shore Yuan) at 6.8 is seen as a red line for government intervention, at least by the market participants in Asia. And it’s a line that traders would hesitate to test. On the other hand, would the Chinese government want depreciation in the Yuan to offset the impact of US tariffs? Our view is, managed depreciation? Maybe. Free fall? Definitely not.

A free fall in the Yuan will inevitably trigger a collapse in the stock markets. Trade war and tariffs are only long term pain which could be eased by various measures. Stock market crash will be an immediate pain that could trigger social unrest. For the Chinese authoritarian government, the biggest threats are always from within. Anyway, technically, 6.7167 is a key near term support in USD/CNY and break will bring pull back to 55 day EMA (now at 6.5829) and below.

Yield surged at the long end, in Japan and US

The second biggest development last week was the surge in Japanese yield. It’s started by rumors that BoJ is considering to tweak the policy under the yield curve control framework. Under YCC, it’s targeting 10 year JGB yield at 0%. And BoJ could lift the target to 0.1%. 10 year JGB yield closed the week up 0.065% at 0.10%. That came after hitting as high as 0.113, highest in more than a year. That’s the primary reason in driving the Japanese Yen higher as the second strongest one last week.

It’s unsure which one started it all, US yield or Japanese yield, or it’s just a parallel development in coincidence. US 10 year yield (TNX) hit as high as 2.988 before closing at 2.960. Despite solid Q2 GDP report, TNX seemed to find it difficult to break through 3.0 handle. Though, for the near term, further rise is expected as long as last week’s low at 2.928 holds. Current rebound is still in favor to extend to retest 3.115 high.

Dollar index extending the consolidation from 96.56

While Dollar ended as the third strongest one last week, it’s merely a rebound inside recent near term consolidation. This could clearly be reflected in dollar index too. DXY is staying in the consolidation from 95.65 and more sideway trading would be seen, with risk of deeper pull back. But still, we’re expecting strong support from 38.2% retracement of 88.25 to 95.65 at 92.82 to contain downside and bring rebound. Rise from 88.25 is expected to resume at a later stage

Such a busy week ahead with BoJ, FOMC, BoE, NFP and more

Looking ahead, there are more than enough events to keep traders busy.

Fed is widely expected to keep federal funds rates unchanged at 1.75-2.00%. The central bank is on course for two more rate hikes this year. Fed fund futures’ pricing also firmed up. For December meeting, they’re pricing in more than 72% chance of a second hike to 2.25-2.50%. It’s up from 57.2% a week ago and 43.9% a month ago. There will be other heavy weight events including ISM manufacturing and services, as well as non-farm payroll.

Eurozone will release Q2 GDP but the larger focus would be on whether CPI will stay at 2.0% in July, and whether core CPI will pick up. Nonetheless, ECB is clear with it policy path. Last week’s meeting revealed nothing new as it will keep rates unchanged through the summer of 2019. There was no clarification of the meeting of “summer”. A month of two or data is not going to have any impact on ECB’s forward guidance.

BoE is widely expected to raise interest rate by 25bps to 0.75%. It’s unlikely for the central bank to disappoint given such high expectations. The focus will be on the new voting as well as the new inflation report. UK will also release a fresh set of PMI data. The momentum in Q3 will be the crucial factor in determining when BoE would hike again.

BoJ meeting is highlight anticipated, yet it could disappoint most. It’s clear that the discussion regarding tweaking the monetary policy is at a preliminary stage. There is little chance for BoJ to make any drastic announcement. Though, most meeting reactions in Yen and JGB yield should be closely watched.

China’s economic data has been relatively resilient so far despite the threat of trade war. IMF also retained is projection of 6.6% growth in China this year, in its latest report. But the PMI data to be released this week will shed some lights on how confidence is affected by the rising trade tension with the US.

Position trading – GBP/CHF short stopped at breakeven, to resell of break of 1.2971 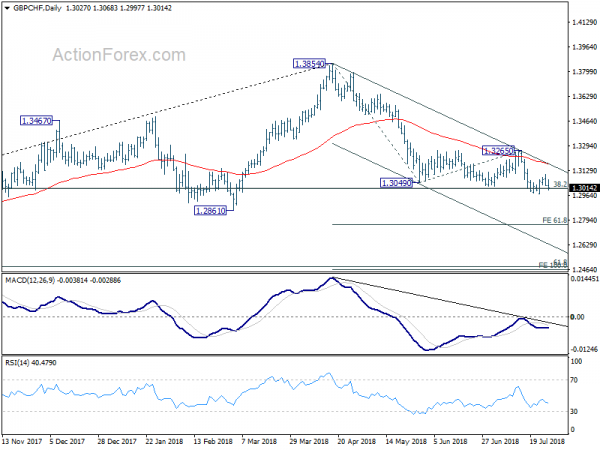 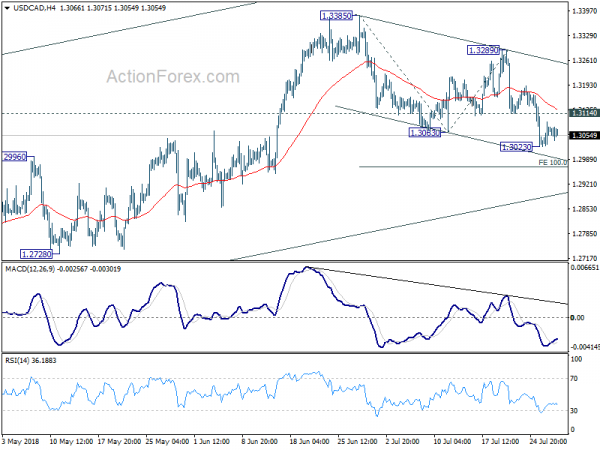 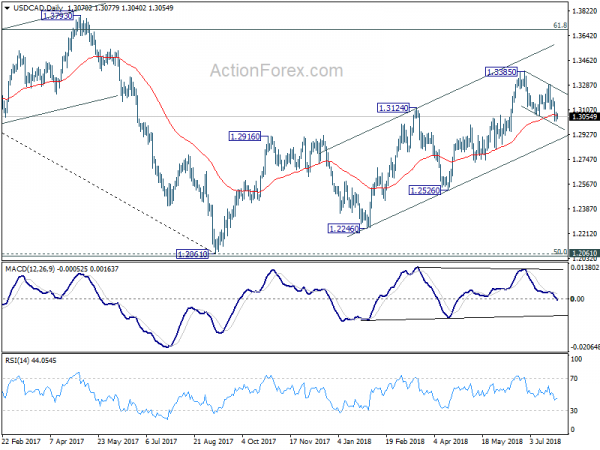 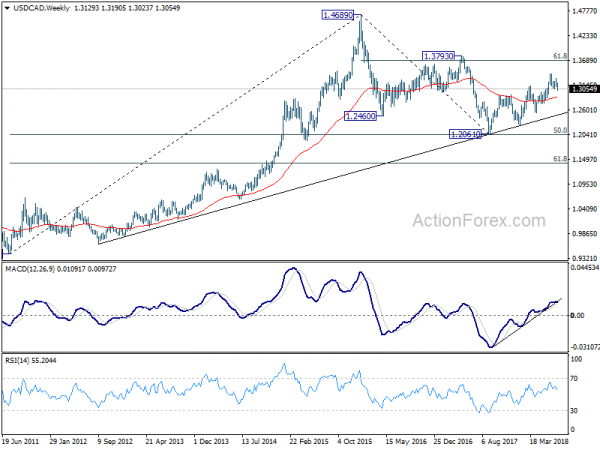 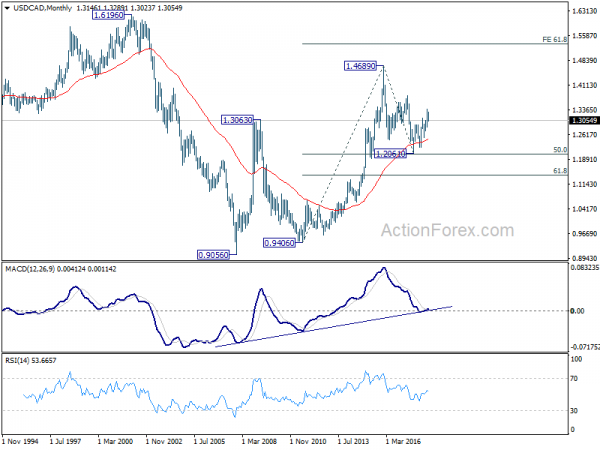