Yen and Dollar closed the week generally lower on strong risk appetite. There was some sort of optimism over US-China trade negotiations throughout the week. And that helped DOW and China SSE extend recent rally. DOW closed above 26000 for the first time since November. SSE also closed above 2800 for the first time since September too. The talks extend into the weekend and we might see some more market volatility after the meetings conclude.

Australian Dollar and New Zealand Dollar were the weakest ones, even with such positive risk sentiments. That highlights the problems the Aussie and Kiwi are facing. China denied reported that the Dalian port banned Australian coal import and helped Aussie pared some losses towards the end of the week. But in the background, Westpac now forecasts RBA to cut interest rates two this year in August and November. RBNZ proposed raising capital requirements for top banks. It’s an act that might eventually tighten up financial conditions and force RBNZ to cut interest rates again. On the other hand, Sterling was the strongest one as traders saw risk of no-deal Brexit fading. Canadian Dollar followed oil prices higher.

US-China trade talks appeared to have made some important progress and are extended by two days through Sunday in Washington. In the Oval office while meeting Chinese Vice Premier Liu He, Trump said “we both feel there’s a very good chance a deal will happen.” He added that “both parties want to make this a real deal” and “we want to make this a deal that’s going to last for many, many years and a deal that’s going to be good for both countries.”

The final deal would be signed off at a summit with Chinese President Xi Jinping and Trump said he hoped to meet with in the “not-too-distant future.”  The current March 1 trade truce deadline could be extended by another month. Meanwhile, the final agreement might extend beyond trade to encompass Chinese telecommunications companies Huawei Technologies and ZTE Corp. Treasury Secretary Steven Mnuchin said the summit is tentatively scheduled for late March at the Mar-a-Lago resort in Florida.

Chinese Vice Premiere also said at the White House that there had been “great progress”. And, “from China, we believe that (it) is very likely that it will happen and we hope that ultimately we’ll have a deal. And the Chinese side is ready to make our utmost effort”. Later in a statement published by Xinhua, Liu said “the two countries have conducted fruitful negotiations and made positive progress in areas including the trade balance, agriculture, technology transfer, intellectual property protection, and financial services.”

Both teams are now working on Trade Agreements directly, rather than Memorandum of Understandings, as Trump dislikes MoUs. The original idea was to have six MoUs covering  cyber theft, intellectual property rights, services, agriculture and non-tariff barriers to trade, including subsidies. It’s uncertain what the new structures of the agreement would be. Mnuchin also said both sides have made an agreement on currency, without details.

Sterling strongest as on bet on no hard Brexit

Sterling was the strongest one last week as traders add their bets that no-deal Brexit could eventually avoided. It’s still uncertain whether UK Attorney General Geoffrey Cox could work out something with the EU to legally assure that Irish backstop would be temporary if triggered. If he can deliver something in the early part of this week, a revised Brexit deal would be put for another vote in the Commons on February 27. With Cox’s endorsement, it’s possible for Prime Minister Theresa May to get enough support. UK would then enter the final stage to prepare for an orderly Brexit.

If May couldn’t get anything new for another meaningful vote in the Commons, the parliament would then vote for amendments to take over control of Brexit. In that case, it’s very likely the the parliament would then seek Article 50 extension, or even change strategy with a Brexit delay. It would be finally be a time for UK lawmakers that they can vote in majority for something, instead of just against something.

Canadian Dollar was the second strongest one as oil prices extends recent strong rally. The strength was attributed to OPEC+ production cut as well as trade optimism. But it’s partly offset by surging US production. WTI crude oil extended the medium term rise from 42.05 to close at 27.20, above 57 level for the first time since November. 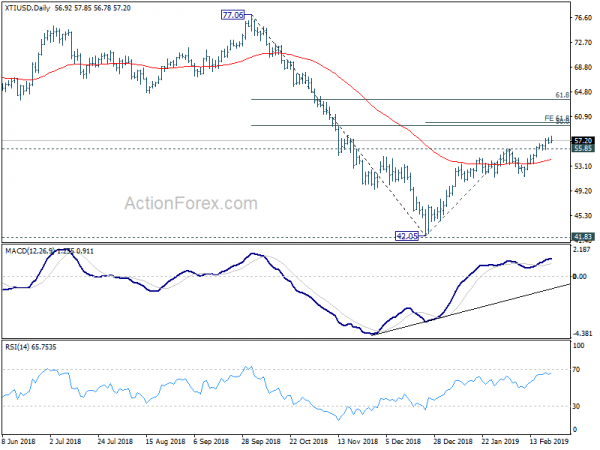 Fundamentally, we’d like to reiterate that Aussie’s failure to ride on stock rally last week said something about it’s underlying weakness. Upcoming data might start to affirm the case of RBA rate cut. And stocks could start to reverse once the trade optimism becomes reality. 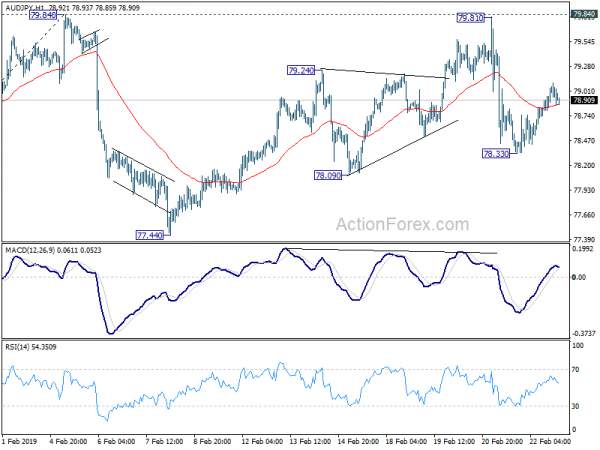 Technically, the rebound from 77.44 to 79.81 is seen as a three-wave correction. Fall from 79.81 is a impulsive move and recovery from 78.33 looks corrective. The cross also struggled to sustain above 55 day EMA. We’d expect current recovery to be limited well below 79.81 to bring another decline, at least for a test on 77.44 support. Break there will confirm that rebound from 70.27 has completed.

So, we’d hold on to the short position with stop and target unchanged. We tentatively look at lowing the stop of break of 78.33 support. 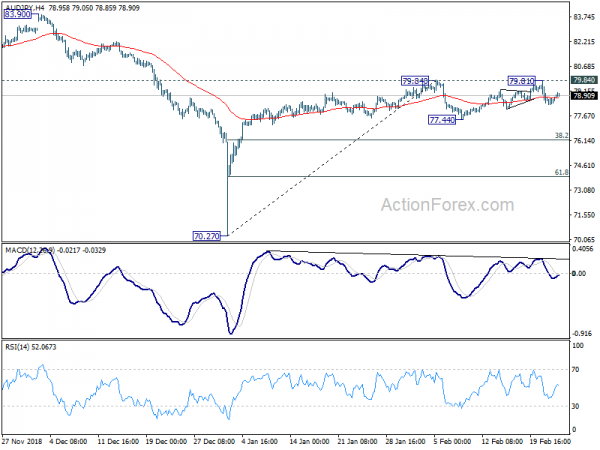 Despite some brief recovery, USD/CAD’s decline from 1.3340 extended to as low as 1.3133 last week. Initial bias is back on the downside for 1.3068 key support. Decisive break there will firstly resume whole fall from 1.3664. Secondly, it will be a strong sign of medium term bearish reversal. On the upside, above 1.3242 minor resistance will turn bias back to the upside for 1.3340 resistance instead. 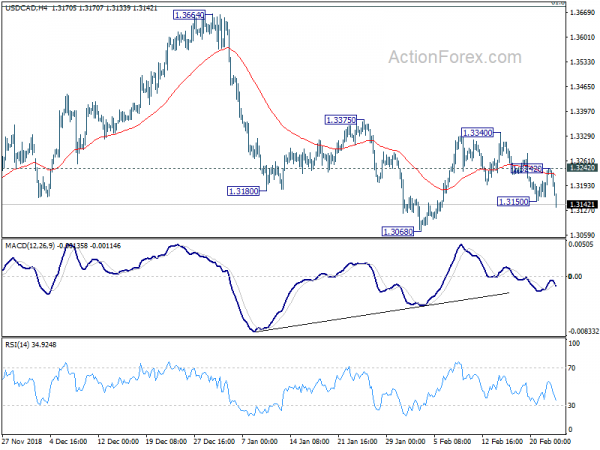 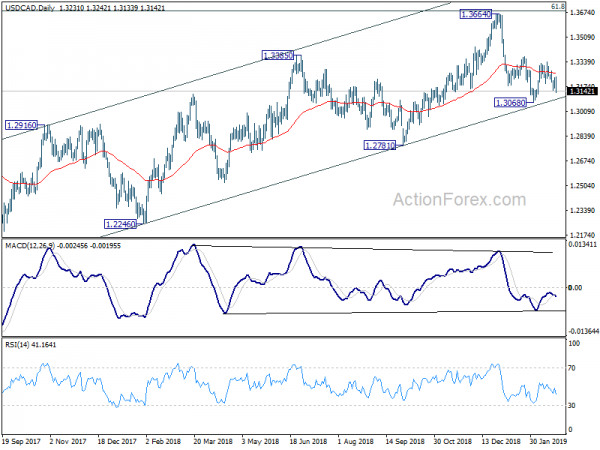 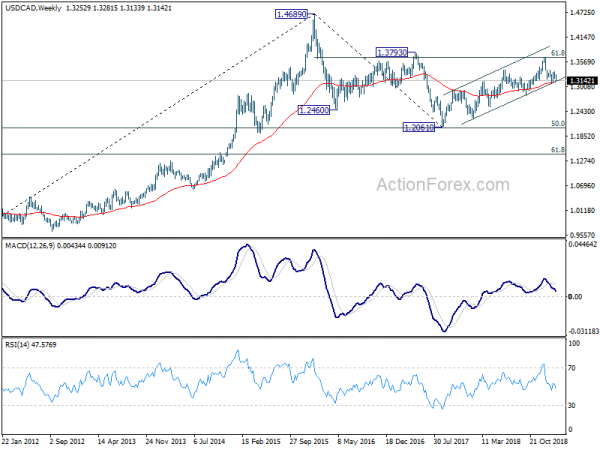 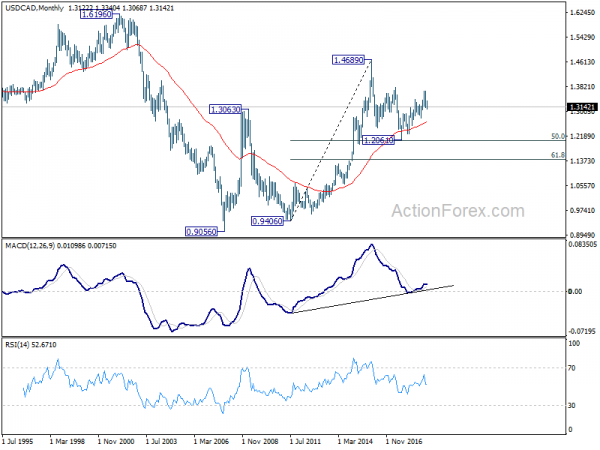