Sterling was the weakest one last week as it suffered persistent selloff ahead of UK Prime Minister Theresa May’s announcement on resignation. The Pound has indeed stabilized since then after the speculation was realized. Without May, the Brexit path ahead becomes even more uncertain. The key lies on who May’s successor would be. Brexit hard-liner Boris Johnson is the favorite. But we’d doubt how much support he’d get from Conservatives on this specific issue of Brexit. More importantly, even if Johnson would prefer no-deal Brexit, we’d doubt if he can get this through the parliament. So far, to the general public, he doesn’t display any more charisma than May.

Dollar was the second weakest one as dragged down by free fall in treasury yields. Escalation in US-China trade war was seen as a key factor of risk aversion. But firstly, Dollar’s performance was not disastrous and only displayed clear bearishness against Yen and Swiss Franc. Secondly, the global stock markets weren’t in crashes despite some volatility. We’d argue that the worst is not being priced in the markets yet.

Swiss Franc and Yen were among the strongest ones for the week, on falling yields, rightly so. But Australian Dollar was a surprised second. RBA Governor Philip Lowe indicated that June is probably the time for another rate cut. After that, Westpac revised their forecast to predict three cuts this year. Surprised win of Liberal-led coalition gave the Aussie a solid base. It’s further boosted by strong rally in iron ore prices. One these two factors fade, Aussie will be back under pressure.

US-China tension will only escalate, before finding a resolution

Tensions between US and China escalated much since the negotiations collapsed weeks ago. Global technology companies started to cut off their ties with Chinese telecom giant Huawei after US moves to sanction it. That came despite US Commerce Department’s announcement to temporary ease some restrictions.

Trump boasted the chance for a quick trade deal, and claimed even the “very dangerous” Huawei could be included as part of the agreement. But no one is listening after Trump misjudged the situations and gave false hope of a deal so many times. It’s now believed that the 25% tariffs on USD 300B in all other Chinese imports would be imposed eventually. And the US is having more Chinese tech companies in radar for Huawei kind of isolations.

On the Chinese side, they continued to deny any claims against them, ranging from government orchestrated IP theft, to Huawei’s ties to the Communist Party controlled army. Instead of looking at ways to rectify their ill practices, China just continued with hard line rhetorics, mentally preparing their citizens for a “new long march”.

For now, no meeting is scheduled for more trade talks. No Trump-Xi summit is arranged. We don’t see any intention to come back to the table soon.

US PMIs show serious risks in the economy

We’re not going to dig deep into the academic aspects on the impacts of prolonged US-China trade war. These reports from IMF and OECD are worth a read if you’re interested. Instead, we’d look what data have been reflecting.

The effects of recent escalation in US-China trade war were likely not fully reflected in the PMI readings yet. Manufacturing could drag on the economy further into Q3 as no quick fix is seen in the tensions. Services are not likely to offer any more help to ease the slowdown. We might start to see upcoming data confirming this bearish picture.

China PMI manufacturing to be released this week will probably be the most important one to indicate how bad the sector has been performance. From there, we might gauge further impact from the current round of tariff escalations.

Dollar did turn weaker last week on falling yields. But there is no clear sign of bearish reversal yet. Clearly, GBP/USD is in near term decline. EUR/USD is held well below 1.1263 near term resistance AUD/USD is kept well below 0.6988 support turned resistance. USD/CAD is just in consolidation from 1.3521. Clear bearish sign was seen in USD/CHF which break through 1.0005 temporary low. USD/JPY does look like it’s resuming recent fall from 112.40. But it has to break through 109.20 support first.

Fed fund futures are pricing in 77.3% chance of Fed cut by December meeting. That’s slightly higher than 74% a week ago. A month ago, only around 58.2% chance was implied. So, the speculations of Fed cut didn’t intensify much last week. Based on recent comments by Fed officials, most are firm on the patience stance. We’d not expecting any preemptive rate cut until there are hard data pointing to deterioration in employment and inflation.

10-year yield in free fall, might test 2% before bottoming

Risk aversion was mainly reflected in US treasury yields last week. 10-year yield accelerated through 2.356 low to as low as 2..294 before closing at 2.324. Some support is happening around 50% retracement of 1.336 to 3.248 at 2.292. But near term outlook will remain bearish as long as last week’s high at 2.441 holds. We’d expect further decline to 61.8% retracement at 2.066, which is close to 2.034 support as well as 2.0 psychological level. Strong support could only be seen around that level to bring sustainable rebound.

However, it should be noted that with 3-month yield is now currently at 2.353. That is, the most important part of yield curve, 3-month to 10-year, is inverted again. We’re expecting deeper decline in stocks, while risks are piling up for global and US economies. Thus, at this point, we’d prefer not to rule out a firm break in 2.0 handle for 10-year yield yet.

No global stock market crash yet, but risks are growing

While the development in US treasury yields were rather terrible, global stocks were relative steady instead. Most major global indices were kept above prior week’s low, except NASDAQ and China Shanghai SSE. Yet, SSE was held above May’s low. Thus, last week’s declines in major indices were largely part of near term consolidative moves. Investors haven’t really panicked over last week’s developments, at least not stock investors.

Though, it should be noted that developments in DOW, S&P 500 and NASDAQ together suggest that risks are rather heavy on the downside, at least for the near term. S&P 500 alone doesn’t look too bad as it was just gyrating around a flat 55 day EMA. A rebound from current level to retest 2954.13 high cannot be ruled out.

GBP/JPY dropped to as low as 138.50 last week as the decline from 148.87 extended. Downside momentum diminished mildly but there is no clear sign of bottoming yet. Further decline is expected initial this week to 61.8% retracement of 131.51 to 148.87 at 138.14. Sustained break there will pave the way to retest 131.51 low. On the upside, break of 141.73 minor resistance is needed to indicate short term bottoming. Otherwise, outlook will remain bearish incase of recovery. 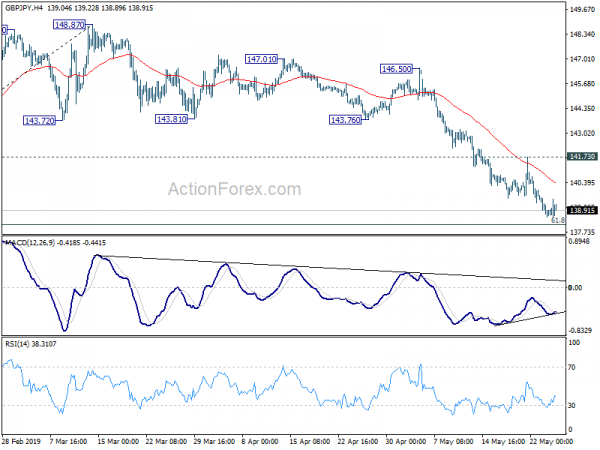 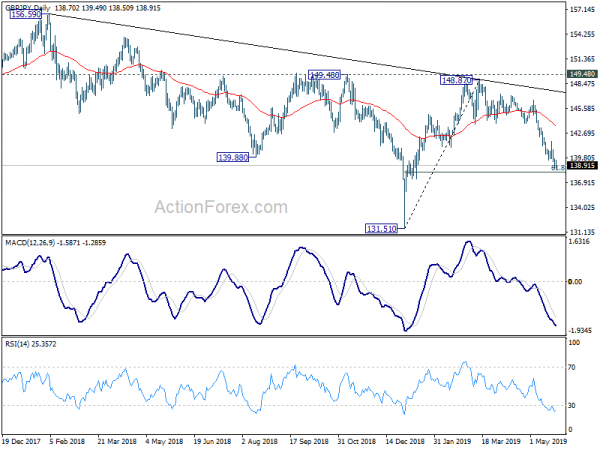 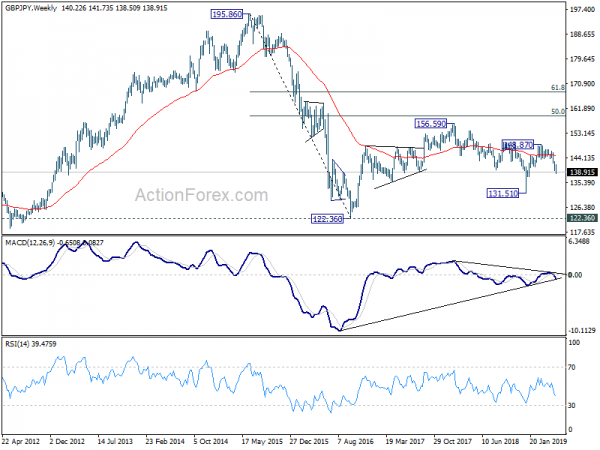 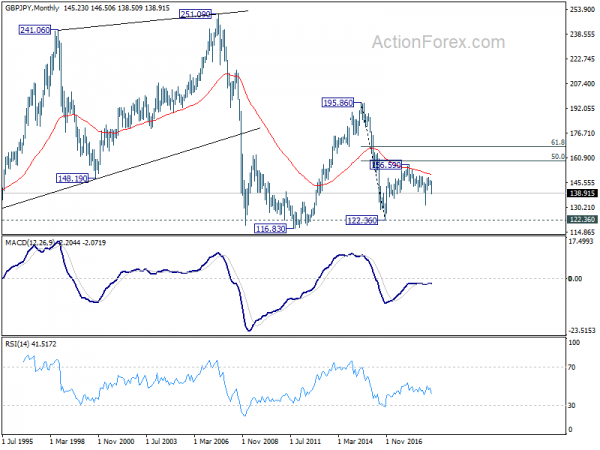