Dollar ended as the strongest one last week as economic data from the US affirmed that Fed is in no rush to deliver the “insurance” rate cut this month, that is, on June 19. Yen was the second strongest as US and German treasury yields stays pressured. Canadian Dollar was the third strongest, lifted by mainly by expectations that BoC is not nearing a rate cut. On the other hand, New Zealand and Australian Dollars were the weakest ones as poor data affirmed the path of monetary easing. Poor data from China also revealed ongoing downward pressure in the economy.

Dollar and Yen look set to resume recent rally after Friday’s strong surge. Technically, EUR/USD and EUR/JPY should have completed recent recovery from 1.1107 and 120.78. Retests of these two lows should be seen soon. Similarly, GBP/USD should be heading back to 1.2259 support. GBP/JPY has indeed breached equivalent support at 136.55 already, indicating fall resumption. AUD/USD also breached 0.6864 support on Friday, suggesting falling resumption. AUD/JPY took the lead and broke 74.96 support on Thursday already and extended decline to close near to weekly low.

Nevertheless, Dollar’s fate could very much depends on FOMC rate decision this week, and new economic projections. For now, fed funds futures are pricing in only 23.3% chance of a rate cut. Tariffs on Mexico were averted with the migration deal. Retail sales suggested solid growth in consumption. Core CPI slowed from 2.1% yoy to 2.0% yoy in May. But that was not a disastrous reading.

While there were talks of increasing downside risks to the US outlook, those are still unmaterialized risks only. There is no imminent need for a rate cut for now. Also, bear in mind that there is an upcoming G20 summit in Osaka, Japan on June 28-29, which is 10 days from FOMC announcement. No one can really predict if there will be a Trump-Xi meeting there, not to mention the results. Thus, it’s more sensible for Fed officials to hold the bullets for now.

Fed statement and projection have to confirm on July rate cut

Market pricing of 87.5% chance of a July rate cut remains high. Apparently, such pricing are based on expectation of further escalation in US-China trade war. That is, markets are expecting imposition 25% tariffs on essentially all untaxed Chinese imports. The result of the G20 summit is just one variable.

Even if no agreement is reached to resume negotiations, Trump has a choice to listen to the voice of his own people and refrain from imposing more tariffs on China. In an open letter to Trump, 661 US Companies and Associations urged the administration to avoid tariff escalation with China. It’s led by “Tariffs Hurt the Heartland” campaign, signed by 520 companies and 141 trade associations. But then, Trump could continue to ignore such voices.

Fed’s base case, however, would likely be based on the assumption of no further trade war escalations. That is, the statement and Chairman Jerome Powell’s press conference might indicate the willingness to “adjust” interest rates. But the unpredictable uncertainty of trade war shouldn’t be reflected in the economic projections.

If Fed turns notably dovish in the forecasts, it’s really rather dovish. If not, the “openness” to cut is just “willingness” but not “indication”. That is, the statement and projections have to confirm each other on the chance of July cut. We’ll see.

Dollar index’s strong rebound last week indicates strong support from trend line. It’s also held well above 55 week EMA. Both developments invalidate our original view of medium term topping at 98.37. Further rise is now mildly in favor back to retest 98.37. Nevertheless, upside momentum remain rather unconvincing as seen in daily and weekly MACD. Even if 98.37 might be breached, we don’t expect sustain trading above there for the moment. On the other hand, break of 96.45 support will revive the case of medium term topping at 98.37 and turn outlook bearish for 95.4 next.

Rebound due in 10-year yield, which might help Dollar

10-year yield had a rather weak recovery last week but quickly retreated. Nevertheless, downside momentum has been diminishing with daily MACD crossed above signal line. Also, it’s now close to 2.034 and 61.8% retracement of 1.336 to 3.248 at 2.066. We do not expect firm break of this support zone, at least with the current attempt. Thus, even if another fall might be seen, downside should be limited. Break of last week’s high at 2.174 would indicate short term bottoming and bring rebound back towards 2.356 key resistance. Such development would help rally in Dollar, in particular USD/JPY.

AUD/USD’s decline last week suggested that corrective recovery from 0.6864 has completed 0.7022, after rejection by 55 day EMA. Late breach of 0.6864 support argues that fall from 0.7295 is resuming. Initial bias stays on the downside this week. Sustained trading below 0.6864 will pave the way to 0.6722 low. On the upside, break of 0.6918 will delay the bearish case and turn intraday bias neutral first. 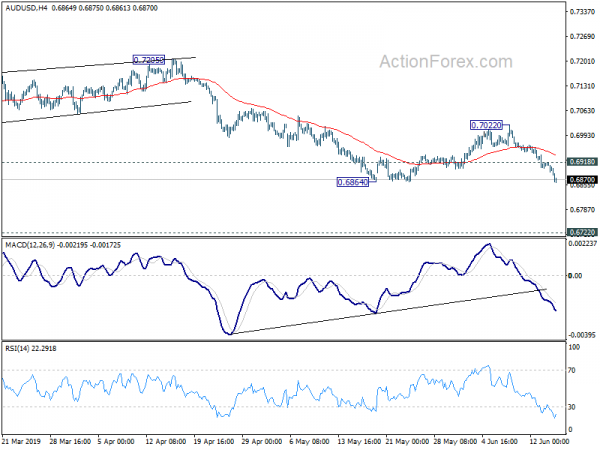 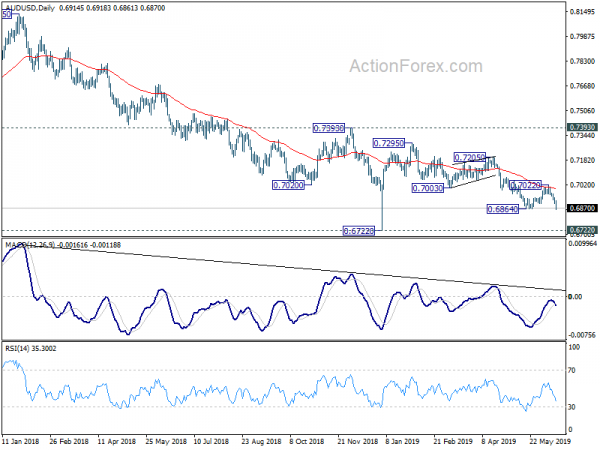 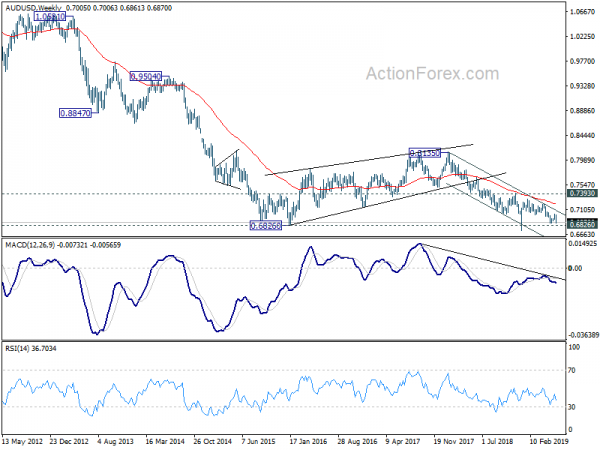 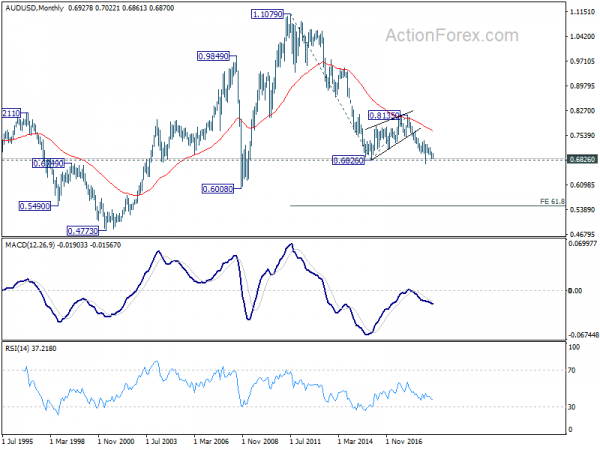