In the currency markets, Sterling was overwhelmingly the strongest one on Brexit optimism. Canadian Dollar was the second strongest, lifted by strong employment data. Euro was the third strongest. On the other hand, Yen and Swiss Franc were the weakest, naturally on strong risk appetite and rebound in treasury yields. Dollar also suffered some selloff and ended as the third weakest. 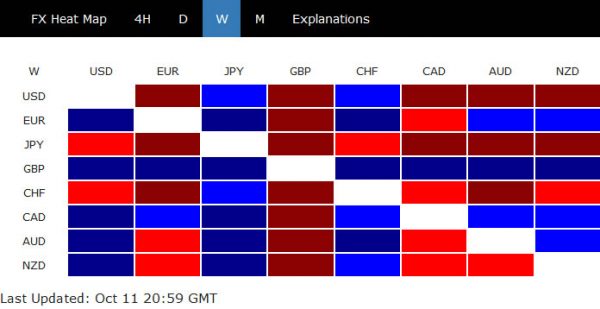 After two days of top-level trade US-China trade negotiations, President Donald Trump announced late Friday that “very substantial phase one deal” was made with China. It would take up to five weeks to put the agreement into words, possibly for signing at the APEC Chile summit on November 16-17. The deal covered intellectual property and financial services. Also, Trump said it’s a “tremendous deal for the farmers”, with purchase of around USD 40B to USD 50B worth of agricultural purchases. The amount would be 2.5 to 3 times of what China has purchased at its highest point thus far.

On the other hand, US will delay the planned escalation of tariffs on USD 250B in Chinese imports to imports, supposed to take effect on October 15. Nevertheless, further 15% of tariffs an essentially all Chinese imports could still start on December 15, unless the second phase could be agreed.

The development is undoubtedly a positive sign to the markets, in the sense that escalation is temporarily halted. But firstly, it’s unsure whether China would do another U-turn again on the texts. Secondly, the imposed tariffs are still in place. Third, many of the core issues are not addressed yet, including forced technology transfer. More importantly, subsidies to state-owned enterprises are the key elements in the planned economy, state capitalism model of China. It’s generally seen as the fundamental principle that China won’t compromise on.

Hence, if Trump is truly insisting on a real and comprehensive trade deal with China, we’re not seeing much chance of a breakthrough ahead to revert all tariffs to the pre-trade war era. Unless he finally backs down.

Pathway to a Brexit deal seen by UK and Ireland, but how about Northern Ireland?

Brexit negotiations took a dramatic step forward with the meeting between UK Prime Minister Boris Johnson and Irish Prime Minister Leo Varadkar on Thursday. They concluded the meeting by announcing that “both of us can see a pathway to a deal”. It’s highly likely that EU won’t object to any arrangement that Ireland could accept. EU chief Brexit negotiator Michel Barnier was said to have received the nod for tunneled discussions over the weekend.

However, a big question forward is that Johnson would need support from Northern Ireland DUP to secure enough votes in the parliament. DUP leader Arlene Foster warned “the DUP has always indicated that the United Kingdom must leave the EU as one nation and in so doing that no barriers to trade are erected within the UK”. Johnson also declined to give a direct answer on whether Northern Ireland would leave the EU customs union. For now, it’s unsure how Johnson could satisfy both sides of the island.

DOW closed strongly by adding 1.21% on Friday. But overall, it still bounded in medium term range below 27398.68 record high. And, based on the pre-close selloff, there might be insufficient momentum for a breakout yet. That is, range trading will likely continue for the near term. In the bigger picture, DOW is holding on well to rising 55 week EMA. Thus, up trend is more likely to continue than not. But considering weak upside momentum as seen in weekly MACD, strong resistance will be seen below 61.8% projection of 15450.56 to 26951.81 from 21712.53 at 28820.30, even in case of new record highs. 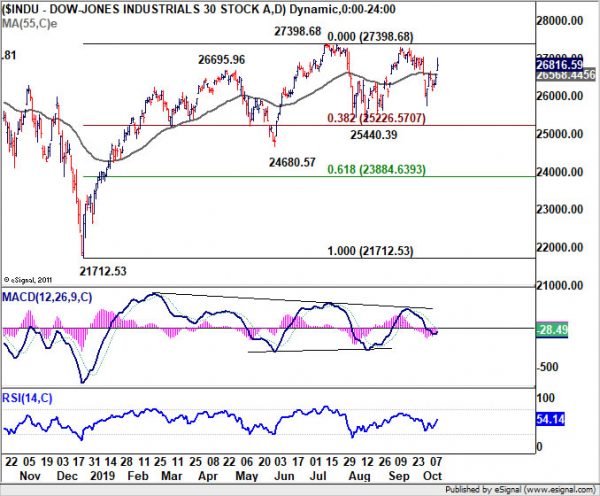 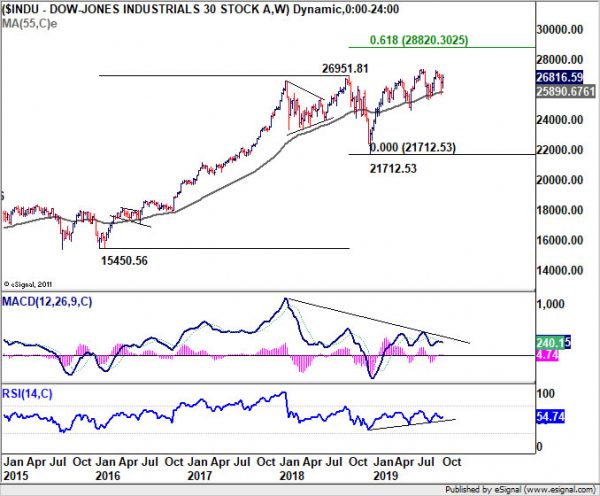 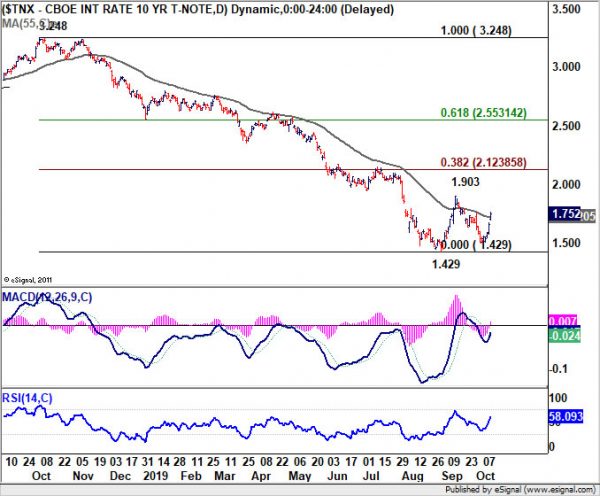 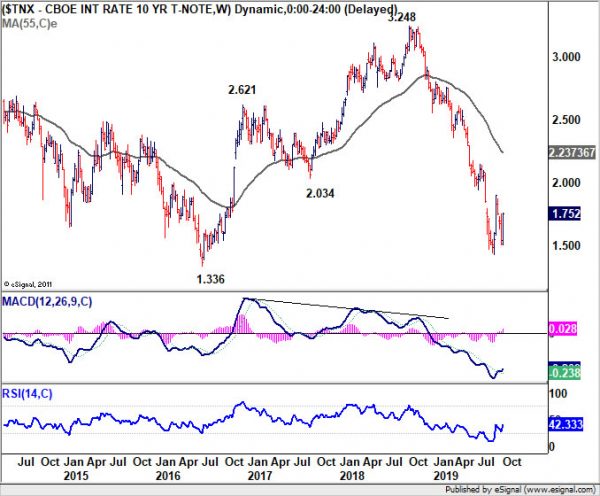 Gold in staying in consolidation, up trend resumption delayed

Gold also dropped notably on Friday but pared back some losses before weekly close. With 1535.68 resistance intact, gold is considered staying in consolidation pattern from 1557.04, with risk of another downside. However, for now, we’d expect strong support from 38.2% retracement of 1266.26 to 1557.04 at 1445.96 to contain downside. We’d expect another rise through 1557.04 to complete the five wave sequence from 1160.17 at a later stage. 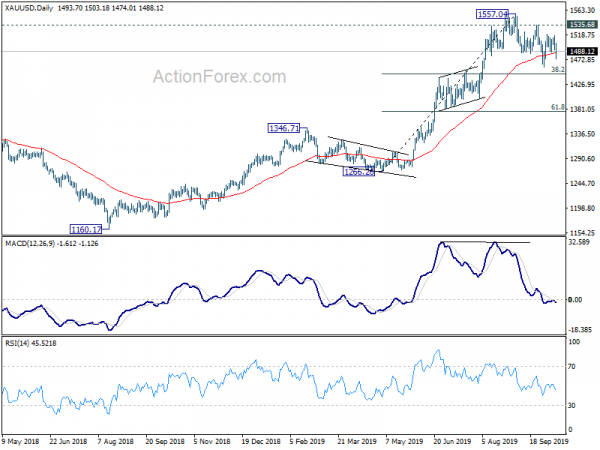 GBP/JPY’s rebound from 126.54 resumed last week and accelerated to as high as 137.89. Current development argues that such rise is the third leg of a long term consolidation pattern. Initial bias stays on the upside this week for 61.8% retracement of 148.84 to 126.54 at 140.33. Firm break there will pave the way to 148.87 resistance next. On the downside, below 136.46 minor support will turn intraday bias neutral and bring consolidations first, before staging another rally. 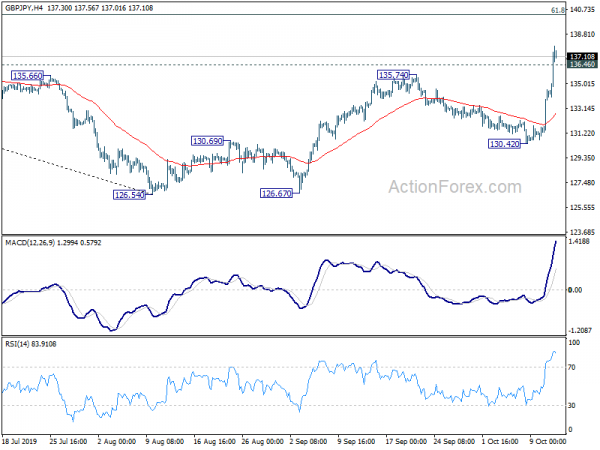 In the bigger picture, consolidation pattern from 122.75 (2016 low) is still in progress with rise from 126.54 as the third leg. Further rise should be seen back to 148.87/156.59 resistance zone. For now, we’d expect strong resistance from there to limit upside. And, this will remain the favored case as long as 130.42 support holds. 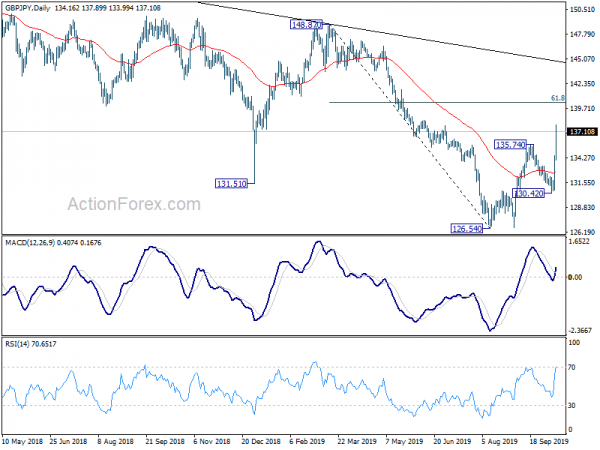 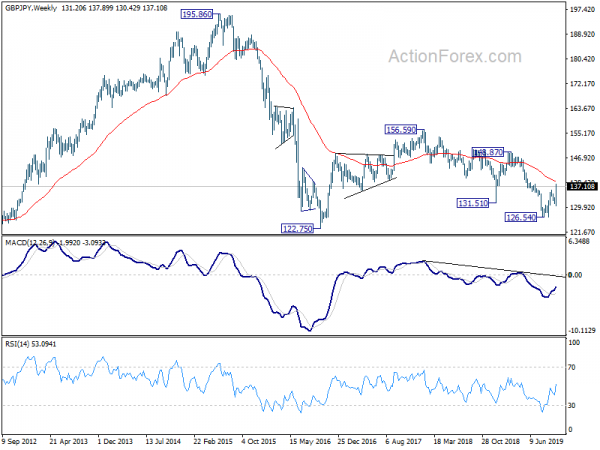 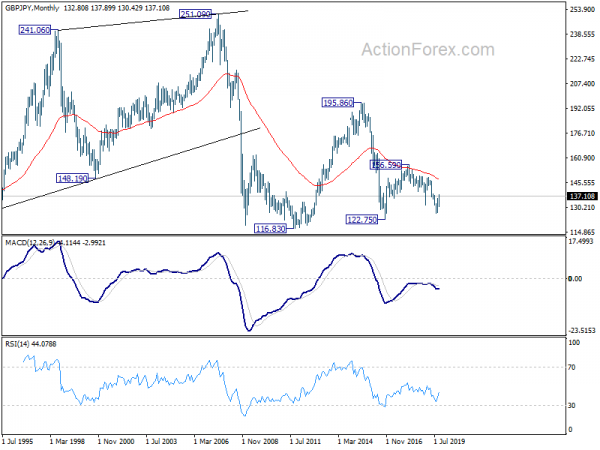