Markets, including stocks, gold and currencies, were generally bounded in consolidative mode last week. News regarding coronavirus vaccines failed to give sentiments another boost. Instead, investors are waiting for fresh inspirations. Dollar ended as the worst performing one, but stayed inside prior week’s range, except versus Kiwi. Euro, and Swiss Franc are the next weakest. Yen followed Kiwi as the second strongest, and then Sterling.

While breakouts are awaited, we’d take a look at the outlook of stocks, yield, dollar, gold and oil below, as well as the possible interplays. Signals are conflicting for now as bullish stocks suggest downside risk in the greenback. Yet, weakness in gold indicates some dollar resilience. Also, oil struggled in range, which argues that investors are not totally optimistic. Same sentiment is reflected in 10-year yield’s decline.

10-year yield gyrated lower last week, arguing that it’s already rejected by 0.957 key resistance, despite hitting 0.975 briefly. Nevertheless, it’s still staying comfortably inside near term rising channel, as well as 55 day EMA (now at 0.791). Outlook stays bullish for another rise. Break of 0.975 will turn focus to key resistance at 55 week EMA (now at 1.031). However, firm break of 55 day EMA will turn near term outlook bearish for another falling leg inside recent consolidative pattern. We don’t expect a take on 0.504 support even in this case. But such development could be accompanied by the start of a deeper pull back in stocks, with a break of 55 day EMA in DOW too.

Not expecting imminent downside breakout in Dollar index yet

Dollar moved lower last week in a relatively corrective manner. While near term outlook stays bearish, downside momentum doesn’t warrant an imminent breakout yet. Instead, firm break 55 day EMA (now at 93.28) would extend the consolidation pattern fro m91.74 with another rising leg through 94.30 resistance. If happens, that should be accompanied by falling stocks and yields, which sign return of risk aversion. However, decisive break of 91.74 will resume whole decline form 102.99.

Gold was somewhat under pressure last week but there was no committed selling that pushed it through 1848.39 key near term support. Still, as it stayed below 55 day EMA (now at 1896.51), a downside break out is mildly in favor. Firm break of 1848.39 would resume the fall from 2075.18, as a correction to the up trend from 1160.17, to 55 week EMA (now at 1747.55). That would be a signal that helps confirm a rebound in Dollar, and probably a near term bearish reversal in stocks too. On the other hand, sustained break above 55 day EMA could indicate that Dollar index is finally ready for a downside break out. 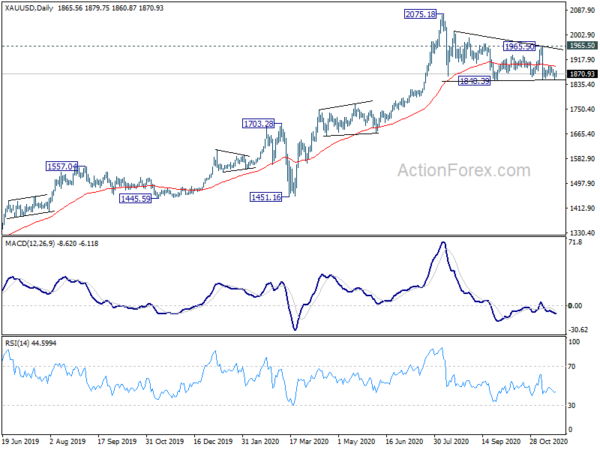 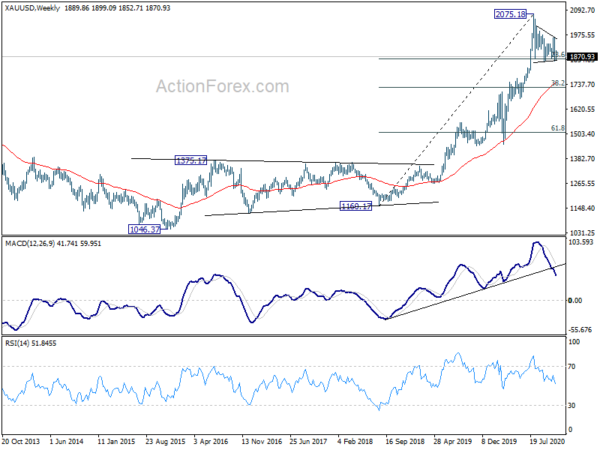 WTI struggled in range ahead of key resistance

WTI crude oil also struggled in range last week. The stay above 55 day EMA (now at 39.73) is a bullish sign. However, considering that it’s now pressing 55 week EMA (now at 42.23), we’re not expecting a strong break through 43.50 resistance yet. Instead, a break of 55 day EMA would extend recent sideway pattern with another falling leg. However, sustained break of 43.50 could be a sign of broad based risk-on sentiments, which is accompanied by rally resumption in stocks. That could in turn be signal of downside breakout in Dollar index. 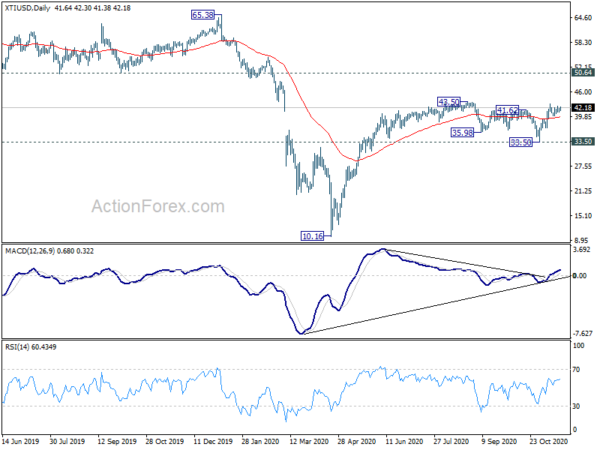 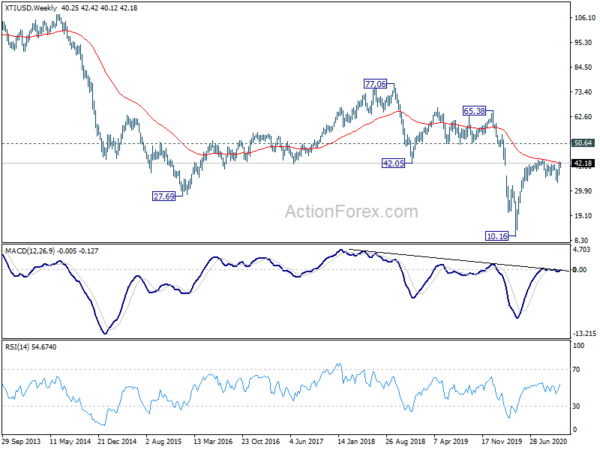 EUR/CHF stayed in sideway consolidation in tight range last week and outlook is unchanged. Initial bias remains neutral this week first and further rise is in favor with 1.0772 minor support intact. Consolidation pattern from 1.0915 should have completed with three waves to 1.0661. On the upside, break of 1.0827 will target 1.0877 resistance to confirm this bullish case. However, break of 1.0772 support will likely extend the pattern with another falling leg and turn bias to the downside. 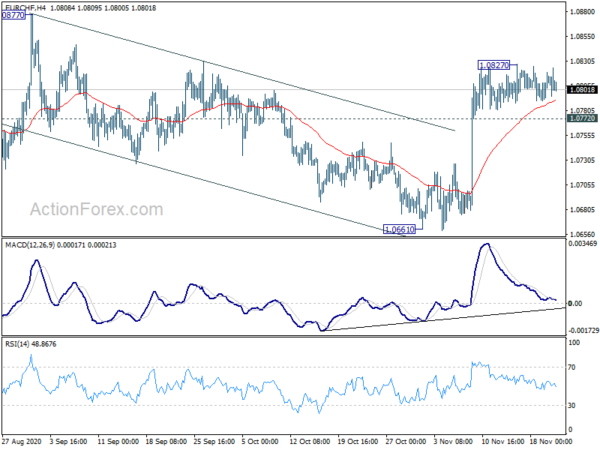 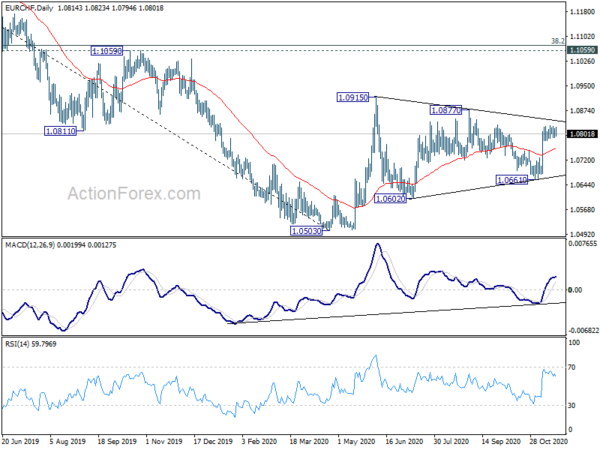 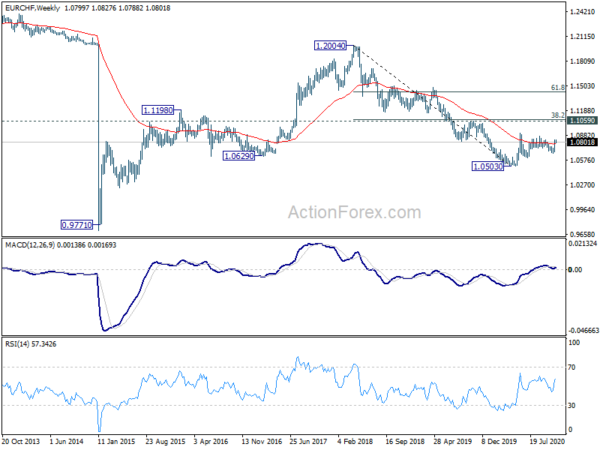 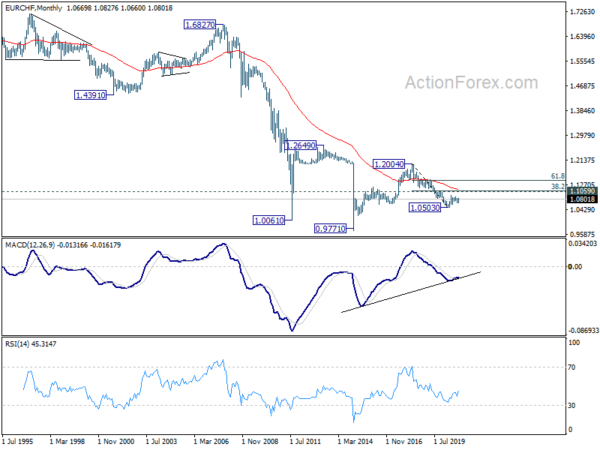